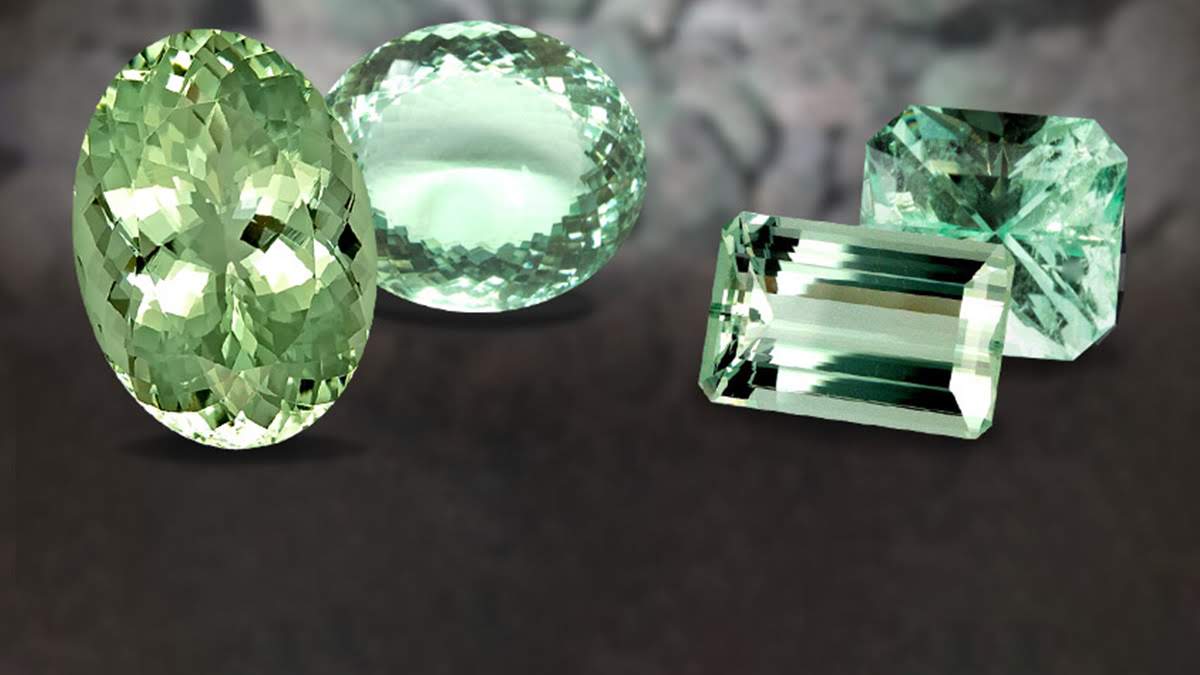 Birthstone Month :
Beryl is not associated with a birthstone month.

Zodiac :
Beryl is associated with the zodiac signs Scorpio and Sagittarius.

Chemical Make-up :
Beryl is scientifically classified as a Beryllium Aluminum Silicate. Presence of differing elements will account for the color it displays. An example of the colored, transparent varieties of Beryl used as gemstones are Emerald (green), Aquamarine (blue-green), Heliodor (yellow), Morganite (pink), Bixbite (Red Beryl), and Goshenite (colorless).

History & Lore :
The origin of the name Beryl is thought to derive from the Sanskrit word ‘veruliyam’, an old term for the gemstone chrysoberyl. It is also believed to derive from the Greek Word ‘beryllos’ which means crystal and was originally applied to all green gemstones but was later used for Beryl alone.

Legend says that Beryl was once used to ward off demons and evil spirits and will protect the wearer from danger well traveling. Other legends also indicate that Beryl can be used to bring good luck, cheerfulness, energy, and can give eternal youthfulness. It is also said to treat disorders of the heart and spine.

Availability :
Both Morganite and Goshenite are relatively rare which stands in the way of them becoming common jewelry stones. Helidor are more commonly found but large flawless stones are quite rare.

Although small Aquamarines with good coloration can be hard to obtain, Aquamarines are generally readily available.

Emeralds of large sizes are both rare and expensive, particularly when of Columbian origin. However, smaller Emeralds, or stones originating elsewhere, whilst still expensive when compared to many other gemstones, are generally readily available.

Red Beryl is one of the rarest, desired, and most expensive of all colored gems. Few crystals approach gem quality, in fact, most of the fine quality Red Beryls are kept by mineral collectors and are never faceted.

Sources :
Heliodor was discovered in Namibia in 1910 and can also be found in Brazil and Madagascar, and Nigeria.

Morganite was initially discovered in California in the Pala Pegmatites. There are also known deposits in Afghanistan, Brazil, Madagascar, Mozambique, Namibia, and Russia.

Colorless Beryl, also known as Goshenite, is named after the location in which it was found in Goshen, Massachusetts.

Red Beryl, also known as Bixbite, was discovered in the 1970’s in the Wah-Wah Mountains of Utah and to this day is the only location where gem quality Red Beryl has been found.

Evaluation :
Beryl is rated at 7.5 to 8 on Moh’s Scale of Hardness and is a durable stone that is ideal for all jewelry purposes. Beryl is colorless in pure form, but different element impurities give it a wide variety of colors to choose from. It has a vitreous lustre and can be transparent or translucent but is frequently tinted by impurities.
Common Cuts :
Beryl has the ability to be cut into a wide spectrum of many-faceted shapes. Beryls are particularly well suited for rectangular or square cuts that bring out their transparency and define their color.

Routine Enhancements :
Almost all of the Aquamarine gemstones on the market today have been heat-treated in order to produce the best / most desirable color. This treatment is used for greenish, yellow or brownish stones to remove tints and produce a beautiful pure blue coloration.

Many Emeralds today are enhanced with colorless oils or resins which reduce the visibility of the inclusions and improves the clarity of the stone. It is also known to sometimes improve the color.

Red Beryl and yellow-green Beryls are not known to be enhanced.

Care & Cleaning :
Beryls can be cleaned using warm soapy water and a soft brush. Enzyme cleaners and cleaning agents containing chlorine should be avoided because they can cause dermatitis and allergic reactions. To reduce the dangers of thermal shock, Beryls should be kept away from prolonged exposure to excessive excessive heat. Beryl jewelry should be stored in a fabric-lined box away from other jewelry items so as to avoid scratching.