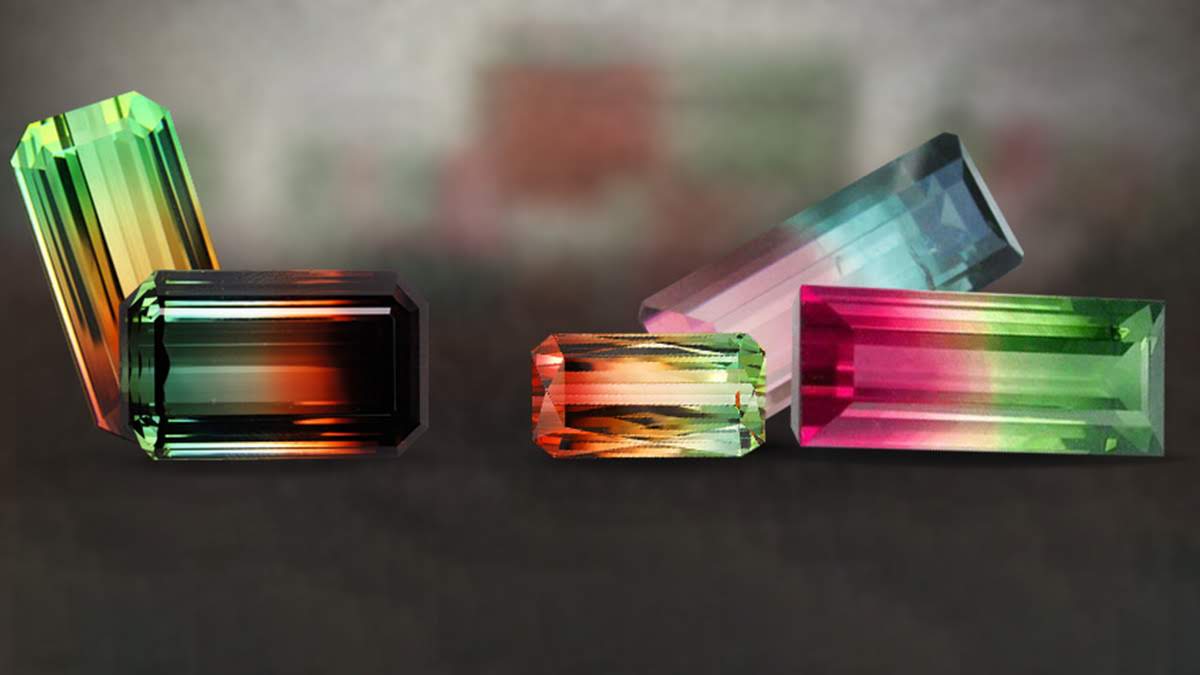 There are a plethora of different names and categories for the Tourmaline gemstone family, which is generally divided into the following sub-groups: Dravite, Schorl and Elbaite, which is named after the Italian island of Elba.

Chemical Make-up:
The actual elements in Bi-Color Tourmaline gemstones vary. The colors displayed by Tourmalines are dictated by the prescence of various metal ions.

Tourmaline is often referred to as the rainbow gemstone, due to the huge amout of colors that it is available in. This was certainly believed by the ancient Egyptians who believed that when Tourmaline traveled from its home in the earth’s core to the surface, it did so along a rainbow, which subsequently gifted the gemstone with all of the colors of the rainbow.

As with most gemstones, ancient civilizations credited Tourmaline gems with magical and mystical powers, including having the power to guard against danger and misfortune. Tourmalines are said to have an especially strong influence over friendship and love, lending permanance and stability to both. Tourmaline gems help to amplify psychic ability / energy and are an excellent aid to increasing self-confidence and understanding. Tourmaline is believed to help assist with tranquil sleep, calm nerves, improve concentration and creative processes and to be an aid to curing cancer.

Availability:
Tourmaline is a widely available gemstone. Currently supply meets demand, but Bi-Color Tourmalines do have a tendency to be quite heavily included. Having said this, Bi-color Tourmalines with vivid, well-divided colors and few or no eye-visible inclusions can be found, are highly desirable and are truly beautiful.

Found in an amazing variety, the sheer number of available Tourmaline colors is second to none and unmatched by any other gemstone. Tourmalines can be found in shades of blue, black, brown, colorless, green, orange, pink, red, yellow and other colors in varying shades and hues, varying from completely transparent to opaque. In addition to this there are also known occurances of bi-color, tri-color, mulit-color and “Cat’s Eye” Tourmalines, ensuring that the Tourmaline truly is a gemstone that is available in a color to suit all styles and tastes.

Arguably the most desirable and valuable Tourmalines in today’s market are known as “Paraiba” Tourmaline. These are vivid deep blue to bluish-green in color and originate from the Paraiba state in Brazil. Expect to pay a premium for this variety. There is also currently strong demand for the “Verdelith” Green Tourmaline and Pink Tourmaline (Pink Rubellite), both of which are priced reasonably moderately. Demand is also increasing expotentioally for many of the varieties of Bi, Tri and Multi-colored Tourmalines, most notably “Watermelon” Tourmaline, which are bi-colored stones with a green border enveloping a red center.

These “Watermelon” Tourmalines are presently enjoying strong demand, but for the moment pricing remains reasonable. When condsidering buying a “Watermelon” or any other Bi-color Tourmaline for that matter, pay particular attention to color seperation and be sure to select a stone that does not suffer from numerous heavy inclusions as these will have a detrimental effect on the overall worth of the gemstone.

Routine Enhancements:
Tourmalines are often heat-treated in order to lighten colors and to remove “silk” (a form of natural imperfection / inclusion). Some colored Tourmalines actually transform into other Tourmalines (most commonly the Achroite Tourmaline variety), during this heating process.