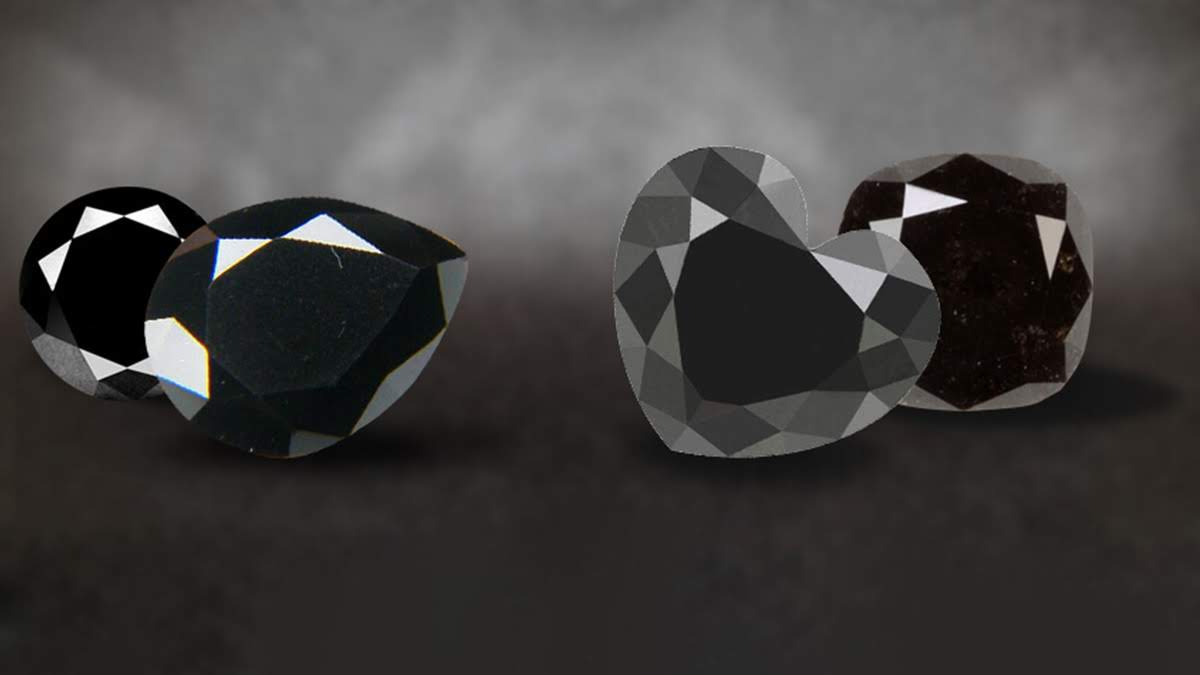 Birthstone Month :
Diamond is the official birthstone for the month of April.

Zodiac :
Diamond is associated with the zodiac sign of Aries.

Chemical Make-up :
A diamond is a transparent crystal of pure carbon consisting of tetrahedrally bonded carbon atoms. The carbon atoms of a diamond are packed incredibly close together, in fact, it has the densest atomical configuration of any substance known to man. A chemically pure and structurally perfect diamond should be perfectly transparent, exhibiting no hue whatsoever. However, no gem-sized natural diamonds are chemically and structurally perfect in this sense. The color of the diamond can be affected by traces of chemical impurities and/or structural defects in the crystal lattice. The black color of a diamond is caused from the presence of tiny mineral inclusions. Studies have shown that these inclusions are mostly the iron oxide minerals magnetite and haematite, along with iron itself.

History & Lore :
The name Diamond derives from the Greek word ‘adama’, meaning “invincible”. This is most likely due to Diamond’s incredible hardness.

Diamonds are believed to have first been discovered and mined in India, where leading up to the mid eighteenth century there were significant finds. The first written reference to the qualities of Diamonds was completed around 296 BCE in the Buddhist text, the Anguttara Nikaya. The text described the Diamonds hardness, luster, and dispersion. Diamonds were thought to be endowments from the gods and were cherished with great importance. Diamonds were used to decorate religious statues and icons, and were thought to bring good luck to those who carried them. Because of their association with divinity, ownership of colored diamonds was once restricted to royalty alone.

It is said that the Greeks believed that Diamonds were tears of the gods. The Romans believed Diamonds were splinters of fallen stars. The Roman scholar and writer Pliny the Elder noted Diamonds ornamental uses in his work ‘Naturalis Historia’. He also added Diamond’s usefulness as an engraving tool due to its hardness. Diamonds were also used in Ancient China as an engraving tool for Jade and as a drill tool for beads.Diamonds are associated with the Crown Chakra. They are believed to symbolize eternity and love, being used in engagement rings and wedding rings the world over. Diamonds are also believed to bring balance, clarity, and abundance, particularly with relationships. It is believed to bring the wearer courage and hope. Diamonds are a universal amplifier and can amplify both positive and negative energies. When it is set with other stones it is believed to heighten their metaphysical properties. Diamonds have also been associated with power, wealth, and crime.

Sources :
India led the world in diamond production from its discovery leading up to the mid-eighteenth century, although these sources have have now been exhausted. Today the most prosperous diamond deposits are found in Africa, where roughly 49% of diamonds originate. The most notable deposits can be found in Angola, Botswana, the Democratic Republic of Congo, Namibia, Sierra Leone, South Africa, and Tanzania. There is also active Diamond mining in Australia, Brazil, Canada (Northwest Territories), and Russia.

Evaluation :
Diamonds are rated at 10 on Moh’s Scale of Hardness and are the hardest substance known to man. Diamonds also do not exhibit any cleavage and are extremely durable, making them perfect for all jewelry purposes. The main problem with Black Diamonds is that they often show gray or dark gray shades, or areas with a less than perfect surface.

The current hype regarding Black diamonds is due to recent marketing and promotion of the stone. Because of high demand and extreme rarity, Black Diamonds are currently being offered at very expensive prices, even when compared to many other fancy colored diamonds. Whilst the black color does make a stunning contrast with quality gold and silver jewelry, many jewelers and gemologists agree that other fancy colored Diamonds are more attractive and more reasonably priced. It is believed that the hype surrounding Black Diamonds will eventually die down, which should mean that prices will drop and be more in line with the prices of other fancy colored Diamonds.

Diamonds exhibit brilliant luster and are the most lustrous of all gemstones. Diamonds also exhibit dazzling color flashes known in the Diamond trade as “fire”. The dispersion is caused by light entering the diamond and splitting into all the colors of the spectrum.

Four attributes, known informally as the 4C’s, are commonly used today as a grading system used to evaluate Diamonds. These attributes are: color, cut, clarity, and carat. This grading system was created by the Gemological Institute of America (GIA), the most respected independent gemological laboratory around, known for its consistent and conservative grading.

Common Cuts :
Like colorless Diamonds, Black Diamonds need to be cut into the correct proportions to maximize brilliance, fire, and the best overall color of the stone. Black Diamonds can be cut into any of the commercially common diamond cuts. Though round brilliant cuts are the most common and most sought after, other cuts include, but are not limited to heart shape, pear shape, princess cut, marquise cut, and baguette cut.

Routine Enhancements :
Currently, only trained gemologists have the appropriate equipment to distinguish a natural diamond from one that has been synthetically made or enhanced. Synthetic Diamonds have been manufactured for over fifty years. Recently the synthetic process has manufactured Diamonds of high enough quality to penetrate the commercial market, though the vast majority of synthetic Diamonds are industrial-grade. Colored diamonds found on the market today have occasionally been heat-treated and/or irradiated in order to intensify color, but these processes can only be carried out on particular stones. Diamonds may also be lasered or filled to improve appearance, but in reality any Diamond treatments are rarely undertaken.

Care & Cleaning :
Though Cleanliness does not affect the market value of a Diamond, it is an important factor regarding a Diamond’s overall beauty A clean Diamond will exhibit much more brilliance and fire than the same stone when it is dirty. Traces of water, dirt, and grease on the bottom of a Diamond can interfere with the brilliance and fire that the Diamond displays. If traces of dirt and grease are found on the top of the Diamond it can reduce its luster. Maintaining a clean Diamond can prove to be a difficult task with jewelry settings obstructing your cleaning efforts so many jewelers offer cleaning services and some offer their customers ammonia-based cleaning kits or ultrasonic cleaners that can be used at home.