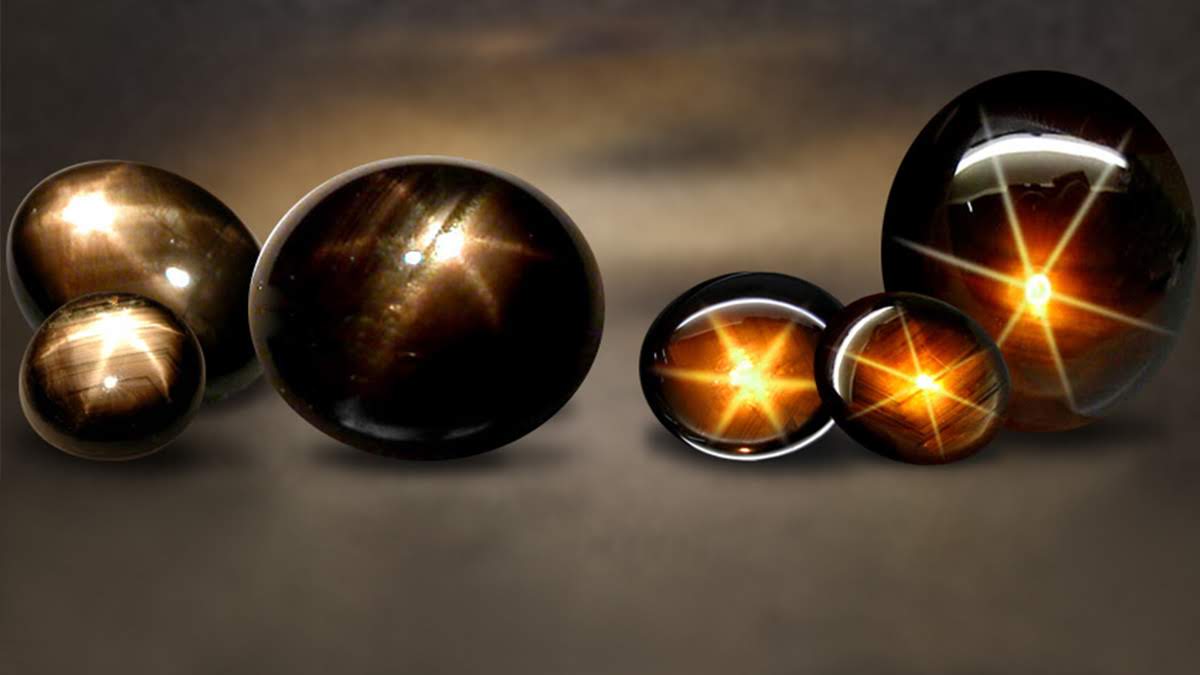 Chemical Symbol:
Al2O3 + other mineral traces depending upon the gemstones main coloration.

Chemical Make-up:
Sapphire is a form of Aluminium Oxide known as Corundum. Pure Corundum is in fact clear, with other present mineral traces responsible for coloration. In the case of Black Star Sapphires, the black coloration is caused by the prescence of Titanium and Iron impurities.

History & Lore:
The name Corundum is believed to originate from either the Indian word kauruntaka, or the Sanskrit word kurivinda. Sapphire, the name for this particular type of Corundum is taken from the Latin word sapphirus, menaing “blue”.

Star Sapphires are said to be the most powerful Sapphires and are collectively known as the Stones of Destiny. The star shown on the gemstone is said to represent destiny, faith and hope. Star Sapphires have the ability to protect their wearer from physical harm, and from other peoples negative energy and thoughts. Star Sapphires are an aid to meditation and believed to gift the wearer mental clarity and higher wisdom.

Availability:
It is an extremely hard and a very expensive exercise trying to source natural Star Sapphires that have not been heat-treated as these gems are amongst the most valuable gemstones known today. However, thanks to modern gemstone enhancements and treatments, it is now possible to own wonderful, heat-treated natural Star Sapphires that are both available to meet demand, and priced at a level making this beautiful gemstone attainable / available to most people. Asterism, or stars, are produced using a process known as diffusion. Star Sapphires that have been created this way will often be known as “Linde” Sapphires.

The highest quality and most desirable Sapphires are those that originate in India, Myanmar (Burma), and Sri Lanka (Ceylon). Sapphires from India and Myanmar (Burma), are highly prized for their pure blue colors and stones from these regions are priced accordingly, often at collectors prices, particularly if there is documentation available to prove the origin of the Sapphire. Sri Lankan (Ceylon) Sapphires are sought after for both their delightful pastel blue and fancy colored variations.

When thinking of Sapphire, most people immediately think of, and prefer, a blue gemstone. Sapphire is however so much more than just a blue gem and is found in various colors including, black, blues, browns, colorless, pink, orange, peach, purple, voilet, white and yellow. The one color that Sapphire is not is red. Red Corundum is what we know as Ruby. In adition to the single colors, Star Sapphires are also available.

A Star Sapphire is a Sapphire that exhibits a star-like phenomenon (asterism). This is caused by inclusions known as silk. When silk inclusions are abundant the Sapphire becomes translucent or Opaque and this effects the way that the gemstone reflects light. The effect created is a star (usually made up of six rays, but sometimes twelve), that seems to float over the surface of the Sapphire as it is moved.

Black Star Sapphires are sometimes confused with Star Diopside stones, which are far less valuable. There is however one sure-fire way to determine which is which; A Star Diposide will display a star with four rays, whereas a genuine Black Star Sapphire will exhibit a star with six (sometimes twelve), rays. This difference is caused by the physical make-up of each of the stones and the presence of a different number of crystal faces for the light to refract off of.

The quality of Star Sapphires is judged primarily by taking into account the sharpness of the star and the gemstone’s overall body color. A natural, untreated Star Sapphire with a very sharp star and a bright blue body color is extremely valuable, very desirable and extremely hard to find.

NB: When shopping for Star Sapphires, be very cautious as synthetic Stars are very common and cheap to produce. Generally speaking synthetic stars will appear to be incredibly high quality, with none, or certainly very few inclusions / irregularities and have extremely sharp stars, whereas natural gemstones often contain inclusions / irregularities and display slightly wavy stars. When examining the gemstone, if you notice that the reverse has been stamped with an “L” the stone you are looking at is most certainly a “Linde” synthetic Star.

Common Cuts:
Regardless of whether or not a Sapphire initially displayed a star, once it has been faceted, it will no longer offer up a star. For this reason, when examining Sapphires gemstone cutters must always take the time to look closely at the stone and check to see whether it has enough properly orientated inclusions to form a star. If it does, the Sapphire will be cut into a Cabochon shape, the only shape that allows the stone to display the beautiful asterism, or star.

Routine Enhancements:
Almost all Sapphires found on the market today have been heat-treated in order to intensify color and remove “silk”, small inclusions present in most natural Sapphires. This method of treatment is considered permanent and color should not fade over time. Asterism can also be produced through a process known as diffusion. Star Sapphires that have been created this way will often be known as Linde Sapphires.

Care & Cleaning:
Sapphires are a very tough, durable gemstone and can safely be cleaned with soapy water or commercial solvent and a brush, and can also safely be cleaned using most modern mechanical cleaners. Do however avoid subjecting Sapphires to prolonged exposure to strong heat or light sources, particularly with regard to some varieties of heat-treated gems, as prolonged exposure may cause permanent changes in coloration.

Strong Growth for Gemstones Market by 2025