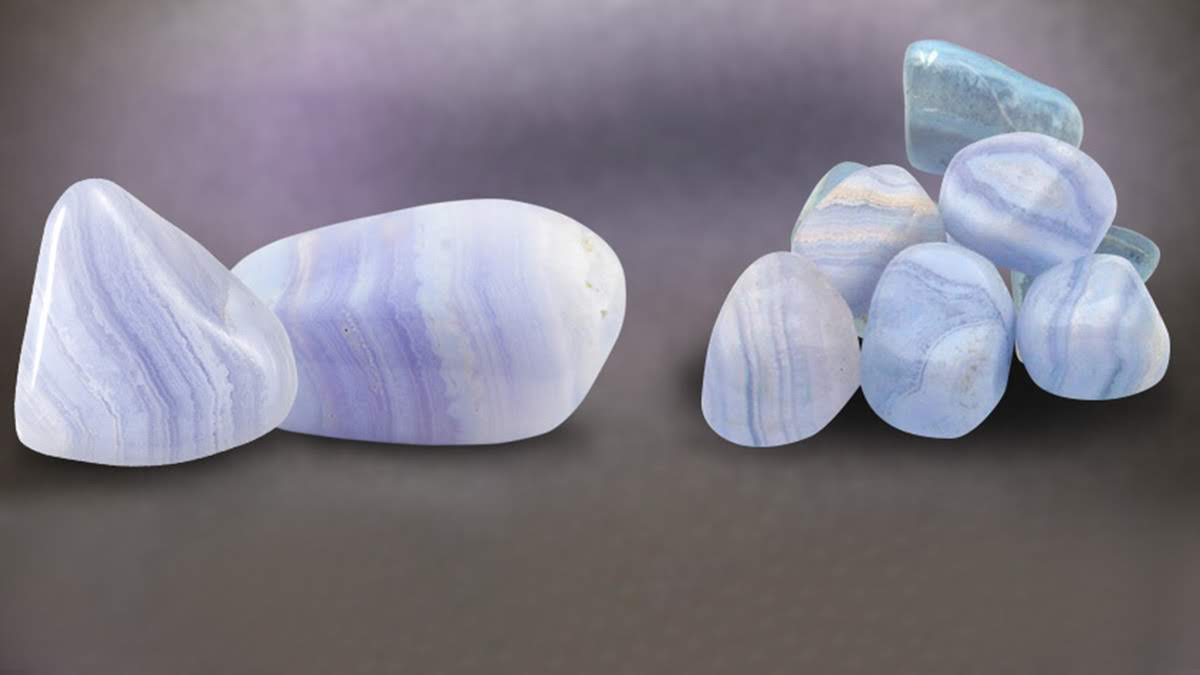 Birthstone Month:
Agate is the birthstone for the month of May.

Chemical Make-up:
Agate is a Silicon Dioxide and is a variety of Chalcedony, which is a member of the Quartz family. It is scientifically classified as a cryptocystalline or a microcrystalline Quartz.

History & Lore:
The name Agate is believed to derive from the Greek word given to a stone that was found thousands of years ago in the Achates River in Southwestern Sicily, now known as Dirillo River.

Blue Lace Agate has also been coined the name “Gem of Ecology” because of its blue and white coloration and banding.

Blue Lace Agate was discovered on Ysterputs Farm in Namibia by man named George Swanson. He had come across the stone on his farm and coined the term “Gem of Ecology” because of its swirling blues and whites that resembled soft clouds in the blue sky. It is believed that the best Blue Lace Agate still comes from the area in the vicinity of Ysterputs Farm.

Blue Lace Agate is a calm, tranquil stone that can help to lessen anger, uneasiness, and nervousness. It is also considered a strong stone for communication. It can bring confidence when speaking in public and ease communication during difficult times. It is also believed to cure nervous speech habits and patterns.

Spiritually it can assist in flight, grace, reaching higher spiritual planes, and can be used to activate the throat chakra. Blue Lace Agate is also believed to bring stronger inspiration, intuition, and inner knowledge.

Physically Blue Lace Agate is believed to aid illnesses such as arthritis, growth and bone pains, headaches, and digestive disorders.

Availability:
Currently supply meets demand. In general, prices for Agate tend to be quite modest with the majority of the price being for the fashioning of the stone rather then the stone itself. Only stones with extraordinary color strips/bands are priced relatively expensively.

Evaluation:
Blue Lace Agate is rated at 6.5 to 7 on Moh’s Scale of Hardness. There are not any specific care precautions required, but general gemstone precautions are always a good idea, so as to ensure that the original condition of the stone is retained. Blue Lace stones are a light blue in color with delicate white stripes, and are often referred as light clouds in the sky. The price of these semi-translucent stones depends on the carat weight and the bands structure. Blue Lace Agate found with distinctive or extraordinary patterns and at larger sizes will naturally demand a premium.

Common Cuts:
The cut is a very crucial trait for the end look of Agate. The colors of this stone are found in strips, bands, or blended in clouds. With Blue Lace Agate in particular, the cutter must concentrate on these natural strips/bands well, cutting to assure that their beauty will be enhanced. Agate is often found in Cabochon cuts but can generally be cut into most of the common gemstone shapes/cuts.

Routine Enhancements:
There are no known treatments for Blue Lace Agate.

Care & Cleaning:
Blue Lace Agate can be cleaned using warm soapy water and a soft brush. As with most gemstones, Agate should be kept away from household chemicals and prolonged exposure to excessive heat that can cause damage to the stone. Blue Lace Agate jewelry should be kept in a fabric-lined box away from other jewelry items in order to avoid scratching.