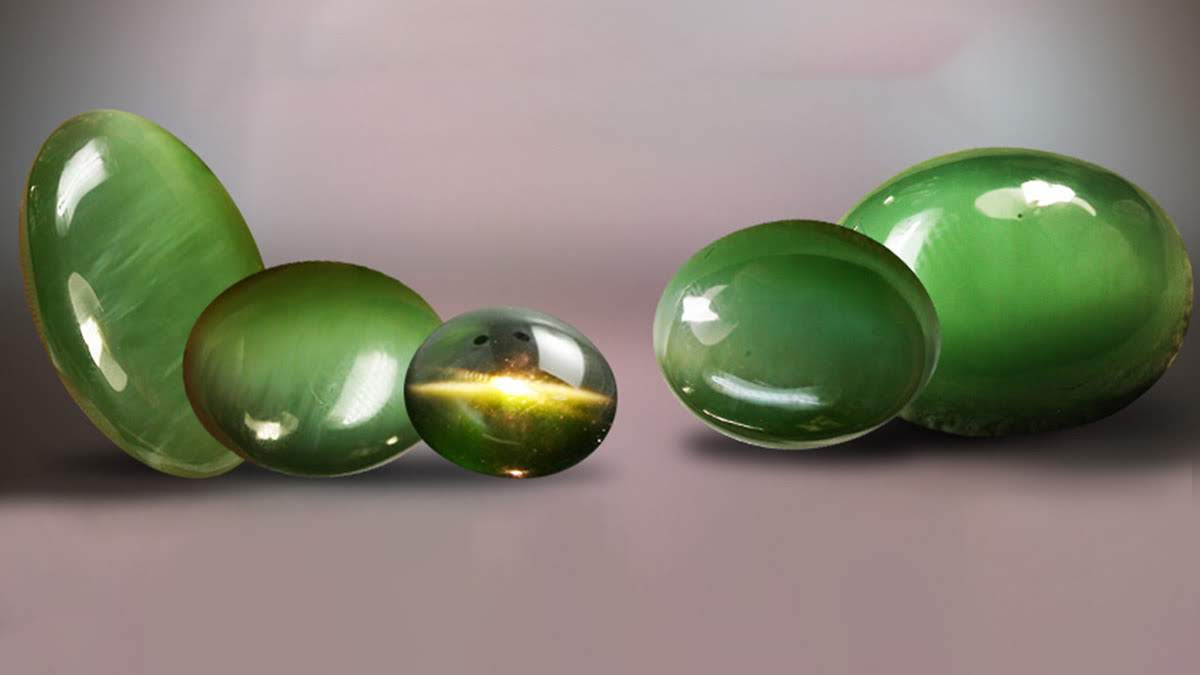 Birthstone Month:
Jade is the gemstone associated with the month of March.

Zodiac:
Jade is associated with the Zodiac sign of Virgo.

Chemical Make-up:
The term Jade actually refers to two distinct types of stones which closely resemble one another, Jadeite and Nephrite. Scientists discovered that although both stones contained Silica in their chemical composition, Jadeite also contains Aluminum and Nephrite additionally contains Magnesium. Jadeite is a Sodium Aluminum Silicate whereas Nephrite is a Calcium Magnesium Iron Silicate.

History & Lore:
Jade is derived from the Spanish word ‘piedra de ijada’, meaning “loin stone”. The Amerindians discovered that Jade could be used as a remedy for kidney ailments, hence the name loin stone. Because of this beneficial effect it had on kidneys, it was also associated with the name ‘lapis nephriticus’, which would later form the name Nephrite. Nephrite is also thought to be derived from the Greek word ‘nephros’, meaning “kidney”.

Jade has been treasured for over 5000 years in China as the royal gemstone, where it is known as ‘yu’, or ‘zhen yu’, meaning “genuine Jade”. Jade is as significant in China as Gold and Diamonds have been in the west. Jade was not only used for the finest objects and cult figures, but was also often found in the tombs of important members of the imperial family. One tomb contained an entire suit made of Jade, assuring the occupant of the tomb physical immortality. In addition to this, Jade was associated with the five cardinal virtues: compassion, modesty, courage, justice, and wisdom.

In Central America, the Mayans, Aztecs, and Olmec’s also treasured and honored Jade higher than Gold, often creating symbolic carvings and masks out of it.

Neolithic Europeans used Jade extensively to fashion tools and weapons, most likely because of its toughness, making it ideal for such purposes.

Jade is believed to stimulate creativity and mental agility well encouraging practicality, wisdom, love,and tolerance. It is also believed to have a balancing and harmonizing effect, banishing negative thoughts and rejuvenating the wearer during times of stress. In addition to this, Jade is also believed to increase body strength and add longevity.

Physically, Jade has long been associated with the kidneys and is still a remedy amongst healers of Nephritic Colic. It is also believed to help protect and aid the heart, larynx, liver, spleen ,thymus, immune system, and nervous system.

Availability:
The correct geological conditions needed to produce Jadeite and Nephrite are rare, therefore the stones are rare and scattered geographically. Jadeite is the rarest of the two and naturally more valuable.

Sources:
Myanmar sources the highest quality of Jadeite, particularly a form of Jade known as Imperial Jade which is considered to be most desired and valued. Other notable deposits of Jadeite can be found in in Guatemala, Italy, Russia, and the United States.

Evaluation:
Jade is rated at 6.5 to 7 on Moh’s Scale of Hardness and is an extremely tough gemstone. Pure Jade is actually white, with impurities responsible for the green, red, yellow, pink, violet, orange, black, and brown colors. Nephrite is mainly found with a mid to dark green color but can also be found in hues of white, yellow, or red. Jadeite, the rarer and more valuable variety of Jade, is usually more vivid in color and has a finer translucency than Nephrite. Jadeite displays hues of green, white, pink, red, black, brown, and violet, with the most valuable and highly-prized being the emerald green colored variety of Imperial Jade native to Myanmar (Burma).

Jade Cat’s Eye displays an amazing phenomena known as chatoyancy, also known in the gem trade as “the cat’s eye effect”. The reason for this fascinating phenomenon is very fine inclusions within the stone. When a light source is directed on these inclusions a bright strip of light appears, running perpendicular to the inclusions. This strip will then glide across the surface of the stone when turned over.

The most important value factor When buying Jade Cat’s Eye gemstones is the intensity of the color and the strength and sharpness of the eye. The eye of the stone must have a distinct and easily identifiable line running through it. In addition to this, the vivacity, texture, and clarity of the gemstone must also be taken into account with the overall evaluation of Jade.

Common Cuts:
Jade Cat’s Eye are most commonly and almost exclusively cut into cabochons. This is because a tall, round cut is required to maximize the striking Cat’s Eye effect most brilliantly.

Care & Cleaning:
Jade is best cleaned using warm soapy water and a soft brush. As with most gemstones, Jade should be kept away from prolonged exposure to excessive heat and household chemicals that could damage the stone. In addition to this, steamers and ultrasonic cleaners should be avoided. Always store your Jade jewelry in a fabric-lined box away from other jewelry items in order to avoid scratching.