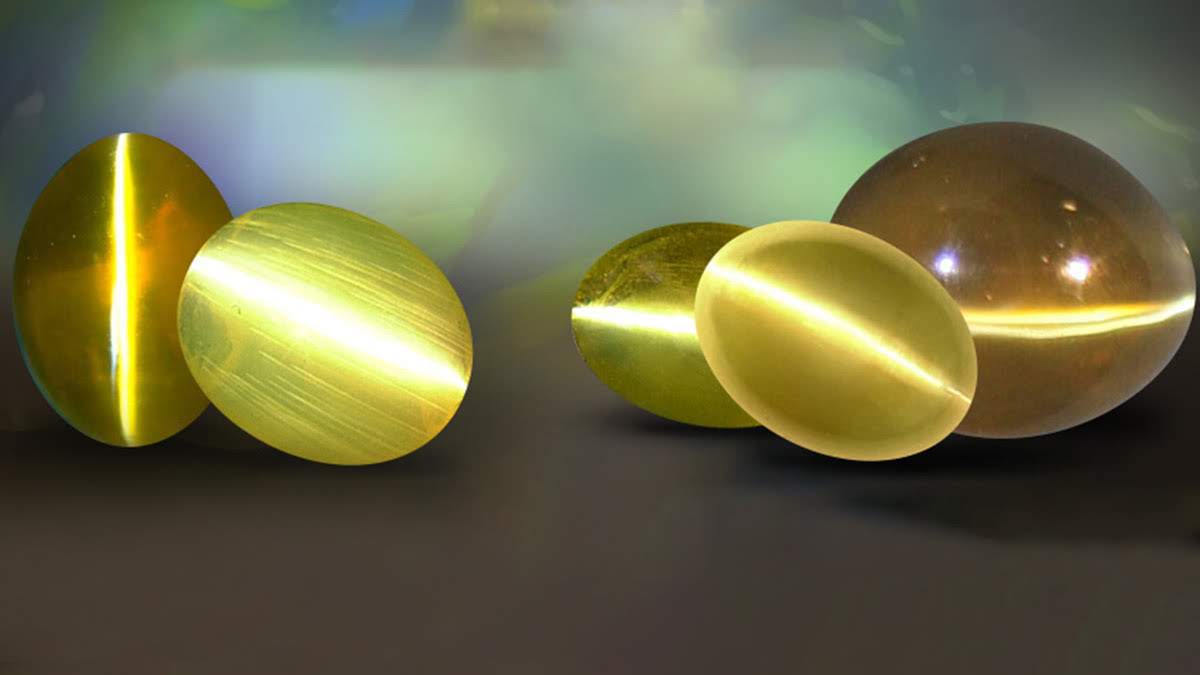 Birthstone Month :
Cymophane is not associated with any particular birthstone month.

Zodiac :
Cymophane is associated with the zodiac signs of Gemini and Leo.

Chemical Make-up :
Cymophane is a Beryllium Aluminum Oxide and is a variety of Chrysoberyl.

History & Lore :
The name Chrysoberyl is derived from the Greek words “Bery”l, meaning green and “Chryso”, meaning golden. The two words combined mean “gold colored beryl”. In spite what the name implies, Cat’s Eye is not actually a Beryl at all. The name Cat’s eye is derived from the phenomena displayed by this stone known as chatoyancy, which in French literally means “cat’s eye”.

Cymophane has been treasured for many centuries, particularly in Sri Lanka (Ceylon), where it is believed to be a powerful protective stone, particularly against evil spirits. Chrysoberyl has long been considered a good luck charm in numerous cultures.

As mentioned, Cymophanes are effective protective stones and talisman. They are believed to induce positive thoughts and help promote tolerance and harmony. Also because of it’s golden hue, it has often been associated with wealth. Chrysoberyls are known to be associated with discipline and self-control. They are said to promote concentration and the ability to learn and to help the wearer with striving for excellence. In addition to this, they bring peace of mind, clearer thinking, and increased self-confidence helping one become more understanding of the fact that
they have everything they already need to succeed.

Availability :
Cymophane is both a popular and extremely valuable gemstone that is genuinely rare, being found only in a few deposits in the world. Expect to pay high premiums for Cymophanes of good color with a finely marked / pronounced eye-line.

Sources :
Deposits of Cymophane can be found in Brazil, East Africa, and Sri Lanka.

Evaluation :
Cymophane is rated at 8 to 8.5 on Moh’s Scale of Hardness, making it a hard, tough, durable gemstone suitable for all jewelry purposes. Cymophanes are particularly popular in men’s jewelry. Cymophanes color ranges from a golden honey to mint green, with the rich gold colors generally being the most valued. The attribute that gives this stone its popularity and name is the phenomena known as chatoyancy, also known in the gem trade as “the cat’s eye effect”. The reason for this fascinating phenomenon is very fine inclusions within the stone. When a light source is directed on these inclusions it creates a bright strip that appears and runs perpendicular to the inclusions. This strip will then glide across the surface of the stone when turned over. Though other gems exhibit this Cat’s Eye effect,they are not as defined and distinct, giving only Chrysoberyl the privilege of having the Cat’s Eye name. All other gemstones displaying chatoyancy must have their given name preceding, an example of this is Quartz Cat’s Eye.

Another interesting attribute that Cymophane Chrysoberyl displays is what is known as the “milk and honey” effect. When a light source is directed at the side of the stone, one side of the eye will be a milky color and opposite side will remain gold. When the stone is rotated, the colors switch.

The most important factor to consider when evaluating Cymophane is the strength and sharpness of the eye. The eye of the stone must have a fine line running through it that is distinct and easily recognized. The depth of the stone’s color and the level of transparency are also important factors and considerably impact upon the stone’s worth. These unique and astonishing characteristics along with its rarity makes Cymophane a popular choice for connoisseurs and gemstone collectors alike.

Common Cuts :
Cymophane gemstones are always cut as cabochons for it is the only cut that will allow the spectacular cat’s eye effect to be displayed.

Routine Enhancements :
Cymophane is sometimes irridated in order to improve color and chatoyancy.

Care & Cleaning :
Cymophane is a hard, durable gemstone that is difficult to scratch and chip. That being said, because of it’s high value and rarity, caution should be taken so as to keep the stone in its original condition. Cymophane is best cleaned using warm soapy water and a soft brush. Prolonged exposure to excessive amounts of heat, household chemicals, ultrasonic cleaners, and steam cleaners should be avoided. Always store your Cymophane jewelry in a fabric-lined box away from other jewelry items in order to avoid scratching.