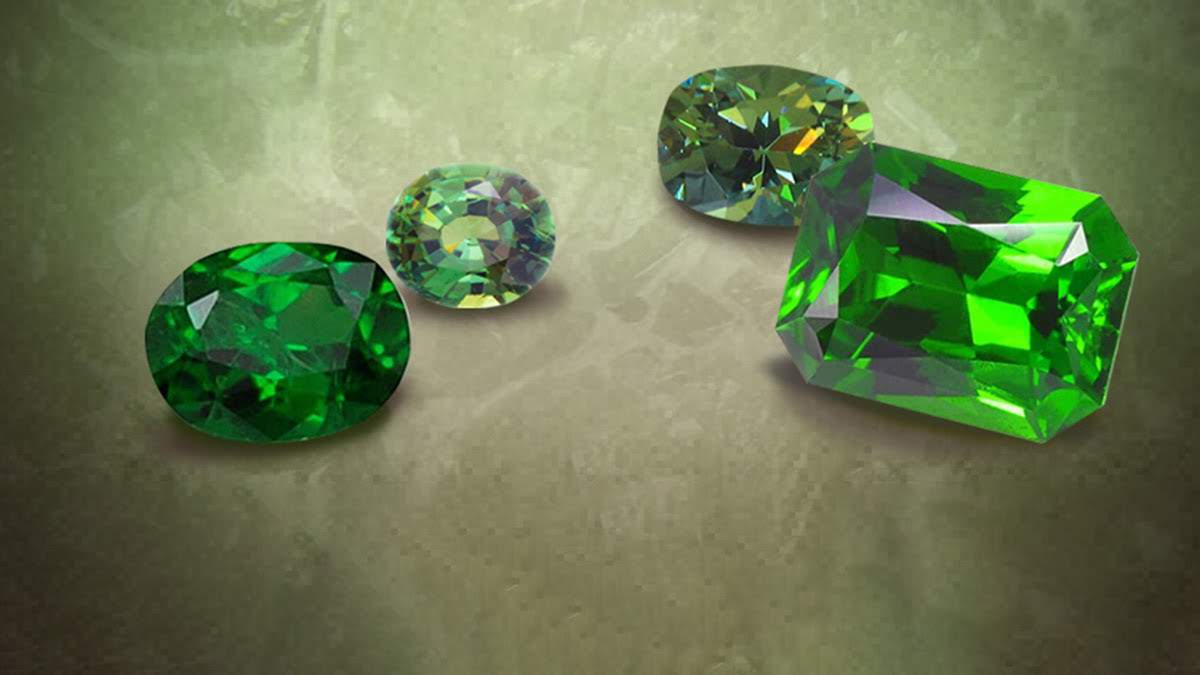 Birthstone Month:
Garnet is the birthstone for the month of January.

Chemical Make-up:
The Demantoid Garnet is a type of Andradite Garnet that is a Calcium Iron Silicate. Traces of Chromium and Iron are the reason for the green coloration.

History & Lore:
The name Demantoid derives from the Russian word “demant” meaning diamond-like. Demantoid Garnet received this name because of the brilliance and luster that these gemstones exhibit.

The Demantoid Garnet was first discovered in 1868 in the Ural Mountains of Russia where it soon rose to be one of the most desired gemstones. It’s beautiful glow and luster accounted for a worldwide boom in demand and its name was soon heard in the finest gemstone shops in Paris, New York, and St. Petersburg. It also was incorporated into some of the finest designs by Russia’s famous jeweler, Carl Faberge.

The boom that Demantoid Garnet had created soon began to fade with the uprising of the First World War and this gemstone would soon become a rarity. Demantoid Garnet was occasionally found in other parts of the world, most notably the Congo, and in Korea in 1975, but unfortunately these stones did not have the characteristics required to make them suitable for Jewelry use and these examples were mostly purchased by collectors.

The name Demantoid Garnet was soon to be heard again when in 1990 it was discovered in Namibia along with an assortment of other gemstones. Though they were suitable and jewelry grade, these newly discovered gemstones lacked the “horsetail inclusions” that had made the Russian demantoid’s so valuable and desirable.

Demantoid Garnet’s are said to enhance creativity, understanding, and to help to bring success to business matters. Physically they are said to fight infectious diseases, blood poisonings, and heart and lung diseases.

Availability:
The Demantoid Garnet is one of the most sought after gemstones today and it is not only incredibly rare but expensive. In fact, it is the rarest and most expensive of the extensive Garnet family. Although a small amount of this gemstone is being mined today, demand for Demantoid’s brilliance and fire far exceeds supply.

Sources:
The most valuable Demantoid Garnet deposits can be found around the Bobravka area in the Ural Mountains of Russia. Though Demantoid Garnet’s of this origin are the standard by which this gem is judged, it can also be found in the Congo, Iran, Italy, Korea, Mexico, Namibia, and the United States (California, Arizona).

Evaluation:
Demantoid Garnet is rated at a 6.5 to 7 on Moh’s Scale of Hardness. Though generally hard, they are rare and should therefore be treated with as much care as possible so as to avoid damage. The Demantoid Garnet’s spectrum of colors comprises of shades of green from a mild yellowish green, to a brownish green. Ideally the color should be as intense as possible without appearing overly dark. An Emerald green is the ideal. The clarity of a Demantoid Garnet is relatively clean so you should easily find a stone that is eye-clean or nearly eye-clean. Demantoid Garnet has an incomparable brilliance and fire and displays incredible luminosity. These factors, along with its rarity are, for the most part, the reason for it’s high price.

Another factor that makes the Demantoid Garnet such a unique stone is its “horsetail inclusions.” These golden brown crystal threads of chyrsotile appear to radiate out from the center of the stone. These inclusions do not decrease the value as with almost every other gemstone, they increase the value of the stone considerably. Though this sounds surprising it offers a beautiful and unique look that no other gemstone offers.

Common Cuts:
Demantoid Garnet is most usually found in Round Brilliant or Cushion Cuts because these cuts best allow this gemstone to exhibit its incredible brilliance and fire.

Routine Enhancements:
Some Demantoid Garnets on the market today have been heat-treated to improve their color.