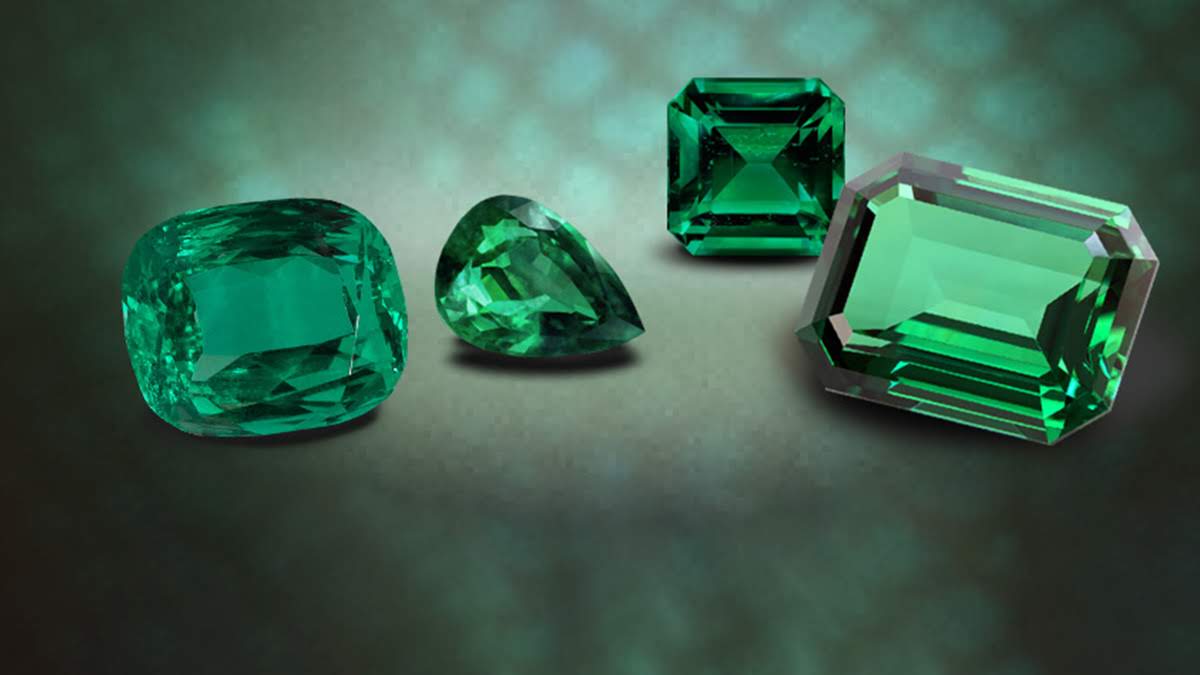 Birthstone Month :
Emerald is the birthstone for the month of May.

Zodiac :
Emerald is associated with the zodiac signs of Taurus and Cancer.

Chemical Make-up :
Emerald is a beryllium aluminum silicate whose green color is derived from impurities of Chromium, Vanadium, or a combination of the two.

History & Lore :
The name Emerald is believed to be derived from the Ancient Greek work “smaragdos” which was originally applied to a variety of green colored minerals and simply means “green stone.”

Emerald’s history begins in Egypt where they were mined in southern Cairo before 2000 B.C., and continued to be mined there until about 1200 A.D. One mine in particular was associated with the Egyptian Queen Cleopatra, because of her love for and use of the gem. This led to the mine being named “Cleopatra’s Mine.”

Pliny, a Roman consular and writer, wrote that “nothing is more intense than the green of Emerald” and had said that “sight is refreshed and restored by gazing upon the stone.” Following this advice, the Roman emperor Nero reportedly wore Emerald sunglasses whilst watching the great gladiator matches

In 1557 after a bloody campaign searching, the Spanish Conquistadors discovered the spectacular Muzo and Chivor mines in present day Colombia.

Emeralds are said to provide peace and harmony and will improve memory, intelligence, creativity and mental capacities. It is also said to implant and develop mutual love and loyalty in a relationship, and to ensure honesty and success in dealings of business and other relationships.

Emeralds have been used to protect and prevent a child from epilepsy and is thought to cure irritations and diseases of the eye. Emerald is also thought to strengthen the kidneys and heart, as well as helping to combat circulatory and neurological diseases.

Availability :
Emeralds of large sizes are both rare and expensive, particularly when of Columbian origin. However, smaller Emeralds, or stones originating elsewhere, whilst still expensive when compared to many other gemstones, are generally readily available. Supply currently meets demand.

Sources :
Emeralds of Columbian origin are recognized as the finest and both Columbia and Brazil are today’s major suppliers of the gemstone. There are also known deposits found in Afghanistan, Australia, India, Madagascar, Nigeria, Norway, Pakistan, Russia, South Africa, the United States, Zambia, and Zimbabwe.

Evaluation :
Emerald is rated at a 7.5 to 8 on Moh’s Scale of Hardness making it suitable for all jewelry applications and durable enough for everyday wear. Clarity and transparency are the most important characteristics when evaluating Emeralds.
In very fine quality Emeralds the back facet should be visible from a face up position. The brightness of the gemstone, which is determined by the cutting and the number of inclusions, is also an important evaluation factor. Intense medium green Emeralds command the highest value. The purity of the green color is crucial to the beauty of the stone, with blue or yellow overtones diminishing value significantly.

Common Cuts :
The cutting of the Emerald creates a difficult task firstly because of the high value of the raw crystals and secondly because of the large number of inclusions that it may have. Because of these factors, a special cut simply known as the emerald cut has been created. This square/rectangular cut not only heightens the beauty of the stone but also protects it from its mechanical strain. Though this is the most common and generally most preferred cut for the Emerald,
it can also be found in most of the commonly recognized and used gemstone shapes/cuts.

Routine Enhancements :
Many Emeralds today are enhanced with colorless oils or resins which reduce the visibility of the inclusions and improves the clarity of the stone. It is also known to sometimes improve the color.

Care & Cleaning :
Emeralds can be cleaned in warm water with a mild detergent and a soft brush, then rinsed with warm water and patted dry. You should never use an ultrasonic cleaner nor a cleaner that contains petroleum distillates for the chemicals can effect the color and overall value of the Emerald. Your Emerald should also be kept away from excessive amounts of heat in order to avoid the danger of thermal shock. Emerald jewelry should be kept in a fabric-lined box away from other jewelry items so as to avoid scratching.

Strong Growth for Gemstones Market by 2025