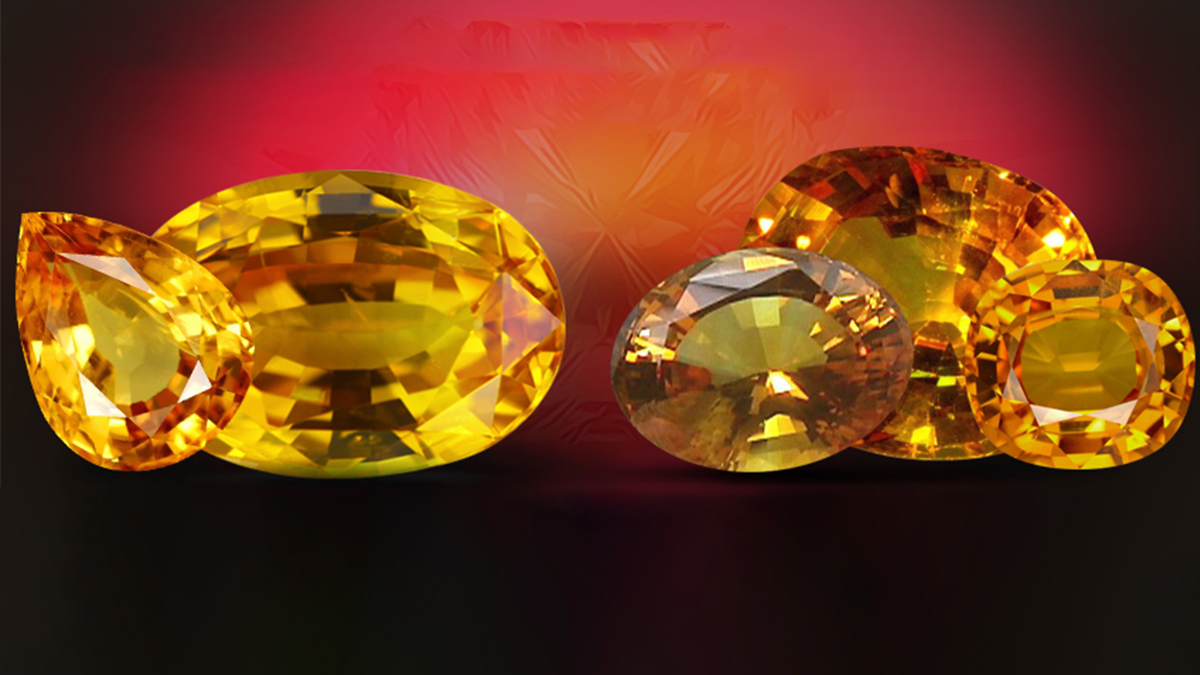 Chemical Make-up:
Golden Sapphire is a form of Aluminium Oxide known as Corundum. The golden coloration is due to traces of Iron and Chromic Oxide.

History & Lore:
The name Corundum is believed to originate from either the Indian word kauruntaka, or the Sanskrit word kurivinda. Sapphire, the name for this particular type of Corundum is taken from the Latin word sapphirus, meaning “blue”.

It was the belief of the ancient Persians that the Earth actually rested on an enormous Sapphire and that the refelction from this Sapphire was what gave the sky its blue coloration. Sapphire has been the pre-eminent blue gemstone for centuries since.

Sapphire is a powerful stone that can take negative emtions and feelings and transform them into peace, love and joy. Sapphire is a very helpful gemstone, often used to treat skin and eye disorders, and to ward off infection. In addition to this, Sapphire has long been regarded as a symbol of constancy and sincerity. Sapphire bestows innocence, truth and good health, and has traditionally been a popular choice amongst Royalty, often having been used in Engagement Rings as an alternative to Diamonds.

Sapphire aids the wearer with opening the third-eye chakra, and is an aid to getting inside the subconcsious mind, as well as being a gemnstone said to attract divine favor.

Availability:
It is an extremely hard and a very expensive exercise trying to source natural Sapphires that have not been heat-treated as these gems are amongst the most valuable gemstones known today. However, thanks to modern gemstone enhancements and treatments, it is now possible to own wonderful, heat-treated natural Sapphires that are both available to meet demand, and priced at a level making this beautiful gemstone attainable / available to most people.

The highest quality and most desirable Sapphires are those that originate in India, Myanmar (Burma), and Sri Lanka (Ceylon).

When buying Sapphires, color, clarity and size are the main considerations and those that have the most effect upon overall worth.

Common Cuts:
Being an extremely hard gemstone that is very well-suited to jewelry purposes, Sapphires are cut into almost all of the known gemstone cuts, with Cushion, Emerald, Pear and Oval cuts being particularly popular.

Routine Enhancements:
Almost all Sapphires found on the market today have been heat-treated in order to intensify color and remove “silk”, small inclusions present in most natural Sapphires. This method of treatment is considered permanent and color should not fade over time. Golden Sapphires are also occasionally irradiated to provide intense yellow or orange hues though this effect is only temporary.

Care & Cleaning:
Sapphires are a very tough, durable gemstone and can safely be cleaned with soapy water or commercial solvent and a brush, and can also safely be cleaned using most modern mechanical cleaners. Do however avoid subjecting Sapphires to prolonged exposure to strong heat or light sources, particularly with regard to heat-treated gems, as prolonged exposure may cause permanent changes in coloration.