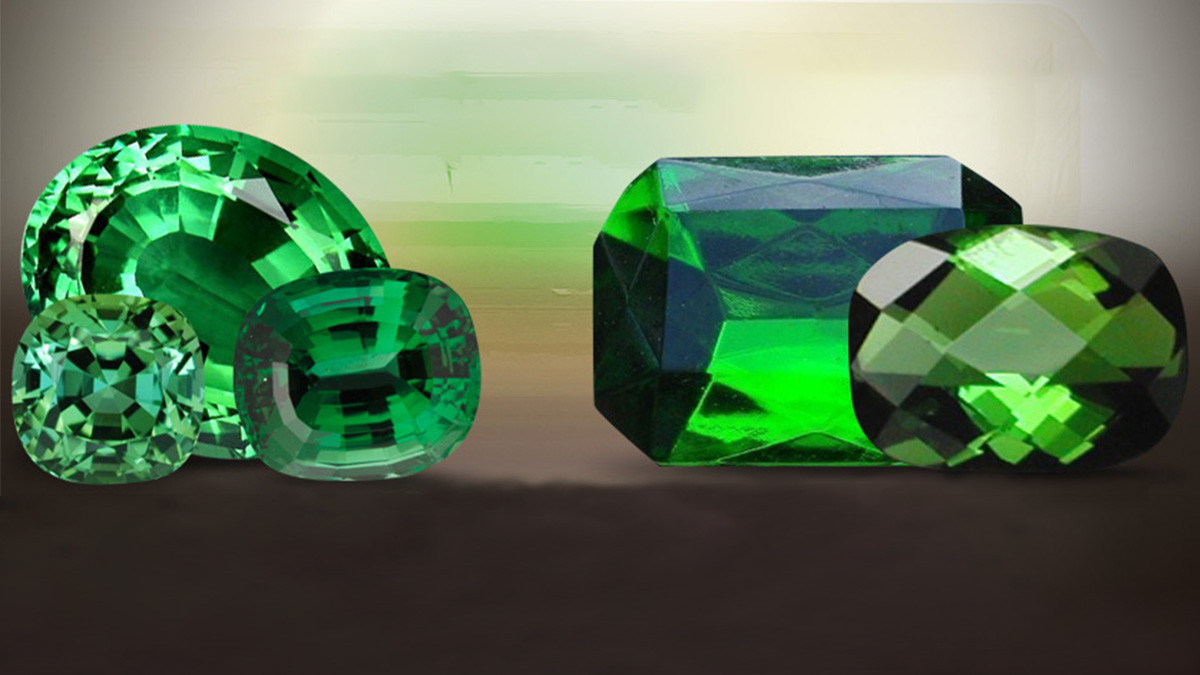 Chemical Make-up:
Tourmaline is made up of the complex Aluminium Borosilicate element, and depending upon the color of the gemstone, one or more of a number of metal ions, usually Iron, Magnesium and Lithium.

It is believed that Green Tourmaline is particularly useful with energizing and rejuvenating the wearer, which can stimulate creativity and bring success and prosperity.

Gemstone dealers the world over would agree that green has always been the classical color associated with Tourmaline. Being that the sheer number of available Tourmaline colors is second to none and unmatched by any other gemstone, it should come as no surprise that Tourmaline offers a vast array of green shades including brownish-green, yellowish-green, olive green, emerald green, blueish-green, and dark bottle-green, all of which are typically eye-clean. Some specimens will have a green color so light that it can hardly be noticed whereas others will be so dark that the green color can only be viewed when a light source is shone through the stone.

All Tourmaline varieties are pleochroic, meaning when the gemstone is viewed from different angles, different color intensities will be visible, with the deepest coloration always being shown along the stone’s main axis. When selecting any variety of Tourmaline, go with the color that you like but generally try to steer clear of any stone that is cut too dark.

Tourmaline is a perfect choice for green gemstone lover’s as there is more often then not a wonderful unique green color that will match your very own unique individuality.

Common Cuts:
Owing to the fact that Tourmaline crystals are long and narrow in shape Tourmaline gems are most commonly, although not exclusively cut into square or rectangular stepped shapes. Most Tourmalines display a mixed color saturation throughout the gemstone which makes the cut crucial to the final look of the stone. Stones that are much too dark need to be cut so that the table will be parallel to the main axis, thus making the stone lighter in color. Lighter stones need to be cut in such a way that the table is parallel to the longitudinal axis, thus achieving a darker color.

Routine Enhancements:
Green Tourmalines are often heat-treated in order to lighten colors and to remove “silk” (a form of natural imperfection / inclusion).

Care & Cleaning:
Use warm, soapy water and a soft brush to clean Tourmaline. Ultrasonic cleaners are generally safe. Never use chemicals such as hydrofluoric acid or ammonium fluoride to clean Tourmaline because it can erode the stone. Much like many gemstones, Tourmaline should be kept away from prolonged exposure to extremes of heat and light as this can cause permanent color change. Always keep your Green Tourmaline jewelry in a fabric-lined box, away from other jewelry, in order to avoid damage / scratching.