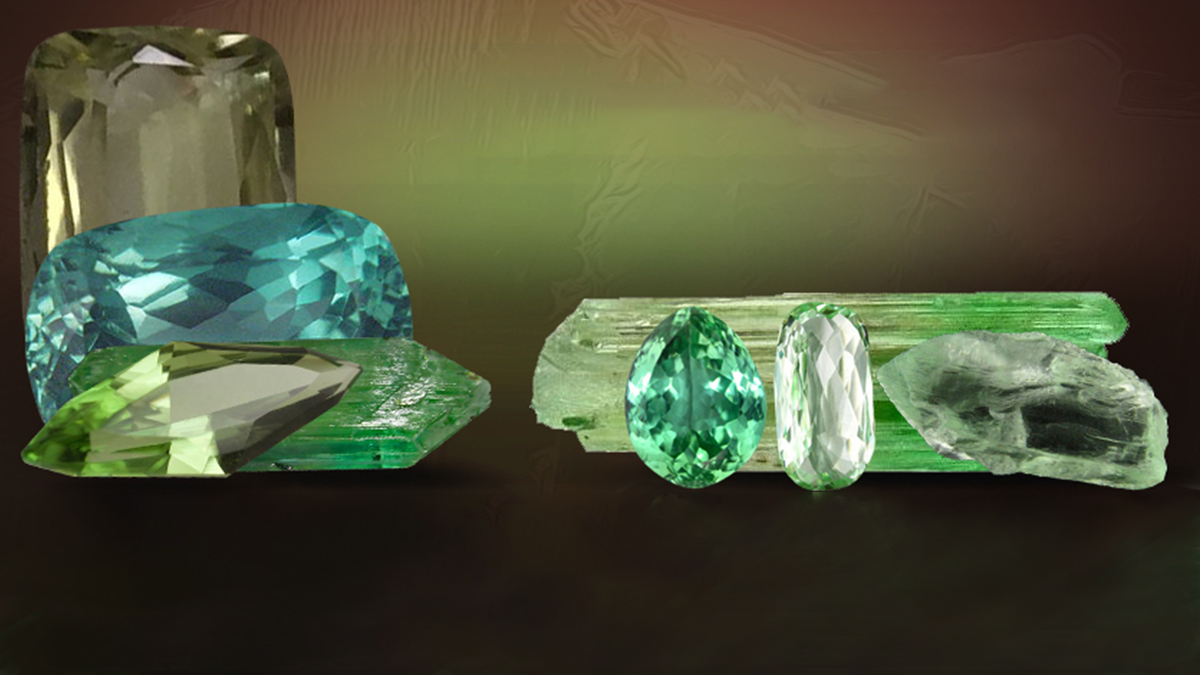 Hiddenite is the green gem variety of the mineral Spodumene.

Birthstone Month :
Hiddenite is not associated with any particular birthstone month.

Zodiac :
Hiddenite is associated with the zodiac sign of Scorpio.

History & Lore :
Hiddenite, much like its relative Kunzite is a relatively young gemstone. It was discovered in 1879 in Alexander County, North Carolina, and was later named after its discoverer, W.E. Hidden. The town where the Hiddenite was discovered was later also named Hiddenite.

Hiddenite is believed to be able to enhance the wearer’s creative and spiritual potentials, as well as being able to stimulate intellect. Physically, Hiddenite is said to be helpful in diagnosing ailments.

Availability :
Hiddenite is a rare gemstone that is for the most part only known to collectors.

Sources :
Hiddenite is exclusively mined in Alexander County, North Carolina. There are deposits of green Spodumenes in other localities, though none match the exceptional, unique green coloration of Hiddenite. Hiddenite derives its coloration from Chromium, whereas the paler green Spodumene does not. Gem dealers have been labeling

Spodumene stones as Hiddenite but this is gemologically incorrect.

Evaluation :
Hiddenite is rated at a 6 to 7 on the Moh’s Scale of Hardness and should be protected from sharp blows as it is relatively fragile. Hiddenite gems are perfectly suited for pendants, brooches and earrings.

Hiddenite offers excellent clarity and a unique green color, ranging from a yellowish-green to Emerald-green . The cut is crucial for Hiddenite’s color because of its pleochromatic nature. Hiddenite displays a phenomenon known as pleochroism, meaning it will exhibit different colors when viewed at different angles.

The most important factor to consider when evaluating Hiddenite is the color. The more intense the color, the more valuable the stone will be. The clarity and brilliance will also have a significant effect on the value of the stone.

Common Cuts :
Hiddenite is considered a true gem cutter’s challenge. Firstly, for Hiddenite’s fine color to be displayed at its full potential, the cutter must precisely align the raw crystal before commencing cutting. This is because of its pleochromatic nature. In a well cut stone, the deepest color will always be visible from above. Secondly, Hiddenite gems have perfect cleavage making it extremely difficult to cut.

Care & Cleaning :
The crystalline structure of Hiddenite is quite fragile, and therefore it needs to be protected from sharp blows and knocks that could cause damage to the stone. As with most gemstones, Hiddenite should be kept away from ultrasonic cleaners, household chemicals, and prolonged exposure to excessive heat that could cause permanent damage / permanent changes in coloration. Hiddenite gemstones are best cleaned using room-temperature soapy water and a soft brush.

Hiddenite jewelry should be stored in a fabric-lined box away from other jewelry items in order to avoid scratching / damage.