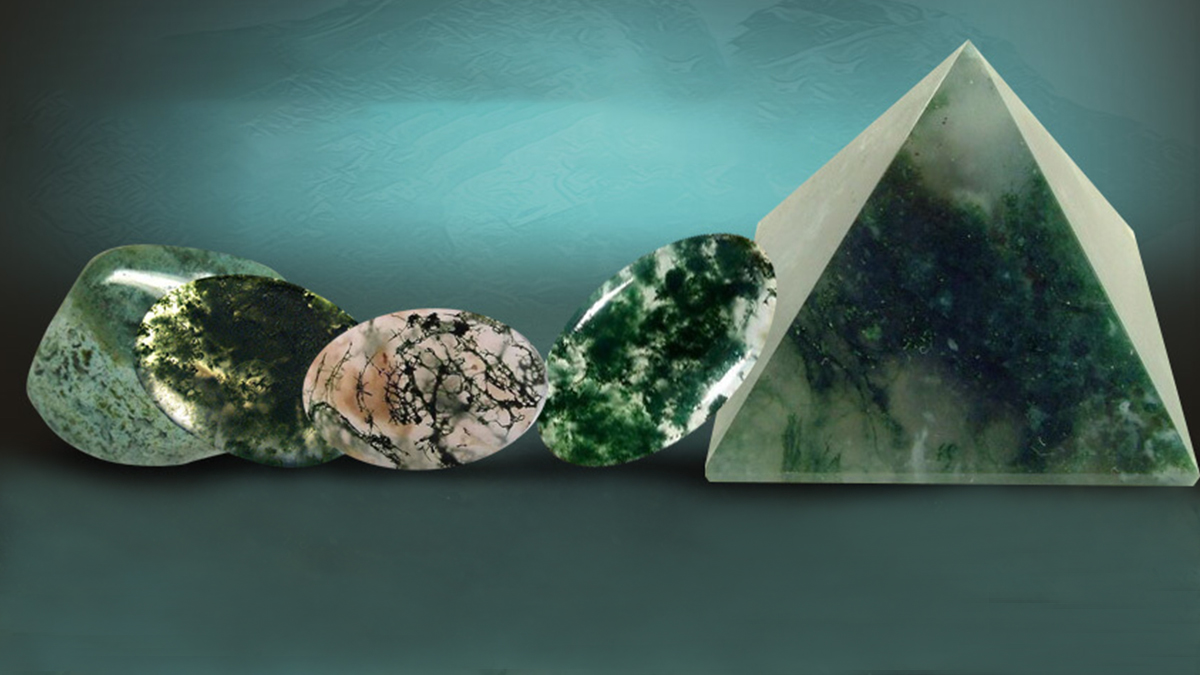 Birthstone Month:
Agate is associated with the birthstone month of May.

Chemical Make-up:
Agate is a Silicon Dioxide and is a variety of Chalcedony, which is a member of the Quartz family. It is scientifically classified as either a cryptocystalline or a microcrystalline variety of Quartz. The color of Moss Agate can be attributed to traces of Chlorite within the stone.

History & Lore:
The name Agate is believed to derive from the Greek word given to a stone that was found thousands of years ago in the Achates River in South-western Sicily, now known as Dirillo River.

Some of the earliest primitive tools that were created by man’s ancestors 2.5 million years ago were made of various types of Quartz, including Agate. Agate has also been used as a gemstone and for other ornamental objects dating back thousands of years. Early Greeks used Agate in the form of amulets as protection from the dangerous elements of the sea.

In medieval times Agate was worn to bring God’s favor and make one agreeable and persuasive. It was also believed to bring protection from all dangers and to be able to bring about victory and strength.

Agate has commonly been used to cure insomnia and to bring about pleasant dreams. It is also said to enhance the wearer’s courage, improve perception and concentration, and to provide protection from dangers. Agate is believed to enhance trust and honesty, and to assist with acceptance to circumstances and emotions. In addition to this, Agate is believed to be able to improve memory.

Often called the Gardener’s Stone, Moss Agate has long been thought to ensure a good crop when worn while planting. It is also said to align the Heart Chakra, and is thought to bring peace and balance to those with excessive duty in their lives, and to bring strength during times of stress.

Availability:
Moss Agate tends to be one of the more sought-after varieties of Agate, yet still remains relatively inexpensive.

Sources:
It is documented that Agate was originally mined in the Nahe River Valley in Germany in 1497. These findings gave rise to the cutting center of Idar-Oberstein, Germany. When the deposits of Agate began to dry up in the Nahe River Valley in the nineteenth century, deposits were found in Brazil which sparked the discovery of the country’s wide and varied gemstone deposits. There are also known sources of Agate in Australia, China, Congo, Egypt, Iceland, India, Italy, Madagascar, Mexico, Nepal, Russia, the United States, and Uruguay.

Evaluation:
Agate is rated at 6.5 to 7 on Moh’s Scale of Hardness. There is not any specific care required, but general gemstone precautions are always a good idea so that the original condition of the stone can be retained.
Moss Agate is a translucent, green colored gemstone containing small mineral inclusions which appear moss-like. Some stones will even contain so many inclusions that the stone will appear almost black Occasionally, Moss Agate can be found with bands of brown and beige, and when this occurs, it is called mocha stone.

The price of Moss Agate will depend on the carat weight, level of translucency and the color saturation.

Routine Enhancements:
Moss Agate is not known to be enhanced.

Care & Cleaning:
Agate can be cleaned using warm soapy water and a soft brush. As with most gemstones, Agate should be kept away from household chemicals and from prolonged exposure to extremes of heat that can cause damage to the stone. Agate should be kept in a fabric-lined box away from other jewelry items so as to avoid damage / scratching