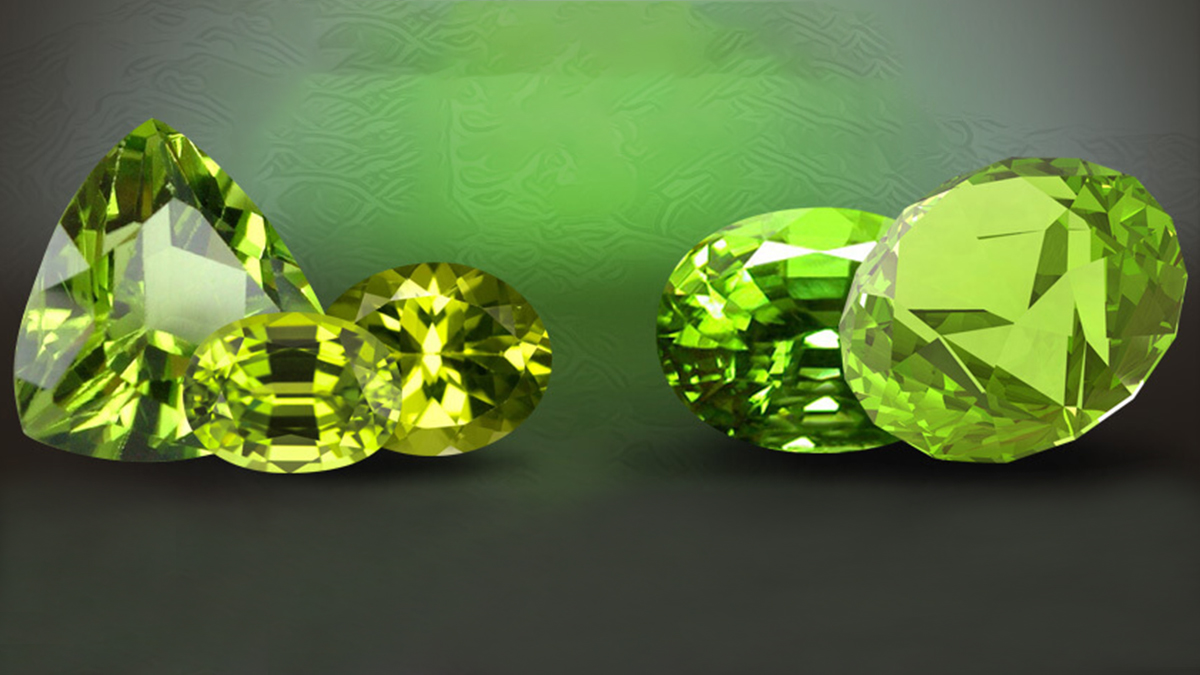 Birthstone Month :
Peridot is the birthstone for the month of August.

Zodiac :
Peridot is associated with the zodiac sign of Libra.

Chemical Make-up :
Peridot is an Iron Magnesium Silicate with the fine traces of iron being responsible for its green coloration. The intensity of the color is dependant upon the amount of iron in the stone.

History & Lore :
Peridot belongs to the olivine mineral group and is occasionally referenced to the name olivine which is derived from the Latin word ‘oliva’, referring to the mineral’s green color. The name Peridot is derived from the Greek word ‘Peridona’ which when translated means ‘giving plenty’.

From ancient times and in fact right up until the eighteenth century, Peridot was referred to as ‘topazion’ or ‘topaz’. The reason for this is believed to be because it was discovered on the island of Topazios, which today is commonly known as Zebirget or St. John’s Island in Egypt. Mining for this gemstone was extremely dangerous work as the island was infested with poisonous snakes, though they were later driven into the sea by a Pharaoh. It is said that the Egyptians mined for Peridot at night, believing that the sun’s rays made the stone invisible.

Native Hawaiians believed that Peridot gemstones were the tears of the goddess Pele.Peridot is also reportedly said to be among Cleopatra’s fine collection of jewelry. They were originally believed to be Emeralds.

Physically Peridot can lessen the thirst of someone with a fever. This is done by placing Peridot under the sufferer’s tongue. Asthma is also believed to have been cured by a powdered form of Peridot. Legends say that medicines will act at a higher potency if drunk from a Peridot goblet.

Availability :
Thanks to a rich and reasonably recent discovery of Peridot in Pakistan, the high demand for Peridot can presently be supplied relatively easily.

Sources :
Egypt’s St. John’s Island historically was the major supplier of Peridot though this supply has since been exploited and sources have been depleted. Today China, Pakistan, and the United States are all vying for the title of the world’s largest Peridot supplier. There are also known supplies of Peridot in Africa, Australia, Germany, Italy, Myanmar (Burma), Norway, and Sri Lanka (Ceylon).

Peridot is the only extraterrestrial gemstone known to man. Some examples of extra-terrestrial Peridot have in fact been faceted and set into jewelry. These examples have been discovered in meteorites called pallasites.

Evaluation :
Peridot is rated at a 6.5 to 7 on Moh’s Scale of Hardness and whilst generally considered suitable for every day wear, care should be taken when wearing it in situations that could cause chipping or scratching. The color of Peridot can vary from a yellowish-green, to olive, to brownish-green. The more intense the green color, the more valuable the Peridot is. Any brown color present in the gemstone, along with any other visible flaws greatly reduces the value of the stone.

Common Cuts :
Peridot can be a difficult task for a gem cutter due to the fact that the rough crystals are quite easy to break. It is therefore cut according to its crystal structure and is most commonly found in classical table, round, octagonal, antique, or oval shaped cuts. Stones that contain numerous or heavy inclusions are generally cut as cabochons. The reason for this is that this shape provides the best possible appearance and helps to disguise inclusions.

Routine Enhancements :
Occasionally Peridots are enhanced with colorless oils or resins which reduce the visibility of the inclusions and improve the clarity of the stone. It is also known to occasionally improve the color.

Care & Cleaning :
Peridots can be cleaned in warm water with a mild detergent and a soft brush, then rinsed with warm water and patted dry. Always avoid ultrasonic cleaners and household chemicals that can effect the color and damage the stone. Peridots should be kept away from excessive amounts of heat and should also be kept away from long contact with perspiration, which can damage the stone over time. Peridot should be kept in a fabric-lined box alone or separated from other jewelry items so as to avoid scratching.