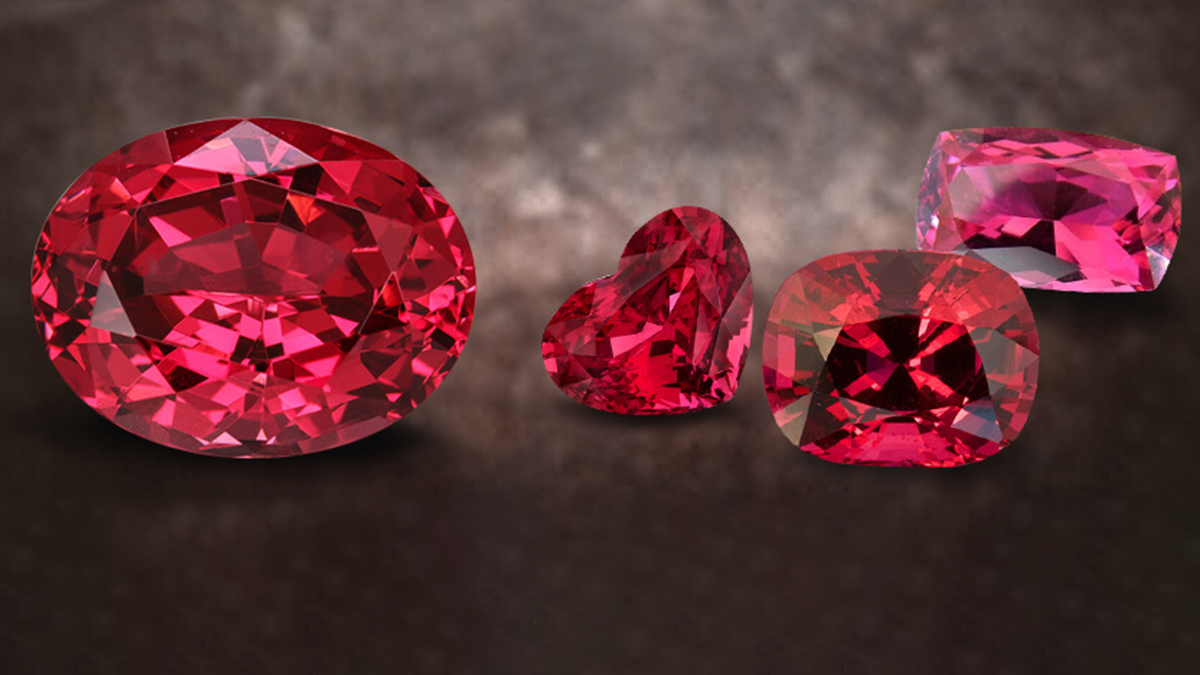 Birthstone Month:
Spinel is not associated with any particular birthstone month.

Zodiac:
Spinel is not associated with any particular zodiac sign.

History & Lore:
It is not known for certain how the name Spinel originated. The most common suggestion is that it is derived from the Latin word ‘spina’ meaning thorn, a reference to its fiery color and the sharp pointed crystals that are found within some Spinels. Spinels were often referred to as ‘balas rubies’ in ancient times. ‘Balas’ or ‘Balascia’ is a territory in Northern Afghanistan now known as Badakshan, and is where Spinels may have originally been discovered. This area was an active gem-producing region in the Middle Ages, and large beautiful red to pink Spinels that were initially thought to be Rubies were discovered there. These Spinels were also considered the best Rubies of their time!

Many royal crown jewels thought to contain rubies that have actually turned out be Spinels. The Black Prince’s Ruby in the British Imperial State Crown is a actually a 170 Carat red Spinel. The Timur Ruby that has the engraved names of the Mogul emperors on its face was once thought to be a Ruby as well. This magnificent 352 Carat stone is also in fact a red Spinel, and is now owned by Queen Elizabeth of England.

It was not until 1783 that a scientist by the name of Rome de Lisle first distinguished the differences between a true Ruby and a true Red Spinel.

Spinels are associated with love, and help the wearer to put their ego aside, and become devoted to another person. The Spinel also encourages passion and is said to increase the duration of one’s life.

Availability:
Spinel is relatively unknown to the common consumer, nor has it been marketed by any of the major gem companies. Because of its rarity, if the demand was to rise the supply would not be enough to keep up with it.

Throughout history Red Spinel has been confused with Ruby, not only because they both owe their color to Chromium, but because they are often found in the same deposits. Chemically, Spinel is a Magnesium Aluminum Oxide whereas Ruby is an Aluminum Oxide. In deposits where both stones are found, Spinel is generally more common. The reason for this is because when Magnesium and Aluminum are present, Spinel crystallizes. Only once the Magnesium has exhausted will Ruby have a chance to crystallize.

Evaluation:
Spinels are rated at 8 on Moh’s Scale of Hardness and are a durable stone that lacks cleavage, making it ideal for all jewelry purposes and well-suited for every day wear. Spinel can be found in an assortment of colors including red, yellow, brown, pink, rose, orange, blue, green, violet, purple, black, and white (colorless).

Top quality stones should be deep and rich in color, eye-clean, and without any traces of secondary brown colors. Spinels are a favorite of gem connoisseurs and gem collectors due to their brilliance, hardness, and wide range of beautiful colors. Although Spinel gemstones are a rarity, Spinel makes a beautiful stone for almost any jewelry purpose.

Common Cuts:
Spinel is a durable stone that lacks cleavage and for this reason it is suitable for all jewelry purposes. It is most often found in oval, round, and cushion cuts and owing to its rarity cannot currently be found in calibrated sizes.

Routine Enhancements:
There are no known enhancements for Red Spinel.

Care & Cleaning:
Spinel is a very durable stone that lacks cleavage making it difficult to chip and scratch. Steam and ultrasonic cleaners are generally considered safe, but they should be used with caution. Avoid household chemicals and prolonged exposure to excessive heat, as this can permanently alter coloration or damage the stone. Spinel can also be cleaned in warm soapy water with a soft brush to remove lingering grease and dirt. Always store your Spinel jewelry in a fabric-lined box away from other jewelry items so as to avoid damage / scratching.