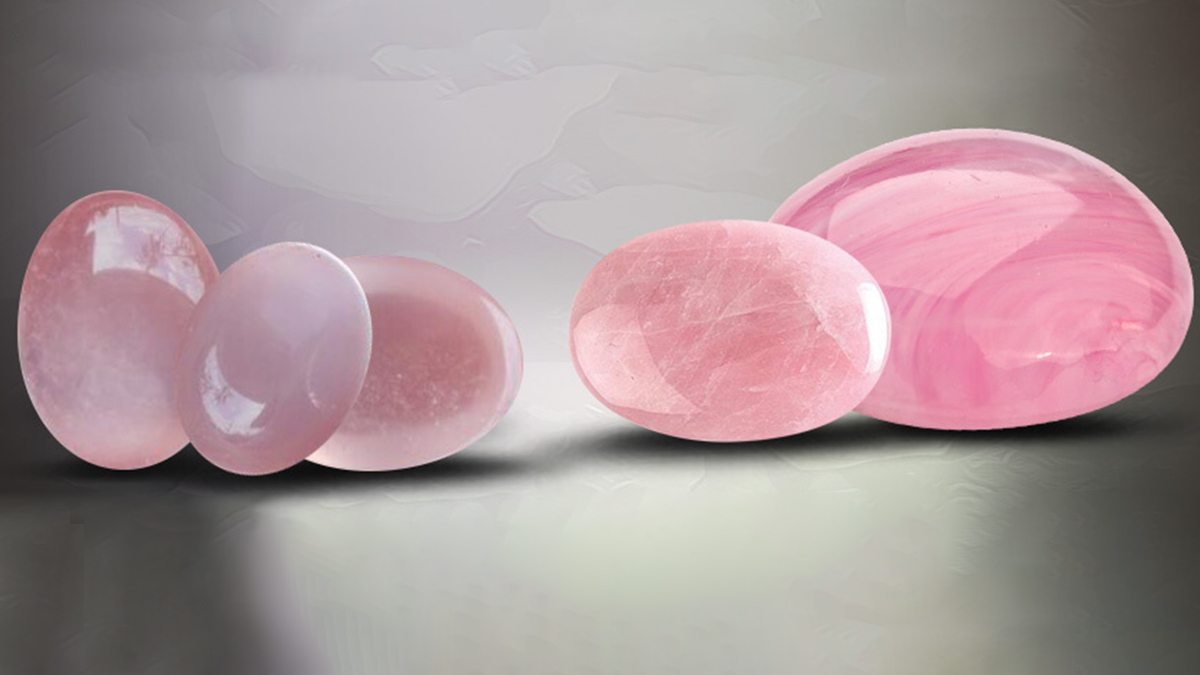 Birthstone Month:
Rose Quartz is associated with the birthstone month of January.

Zodiac:
Rose Quartz is associated with the zodiac signs of Taurus and Libra.

Chemical Make-up:
Rose Quartz is a Silicon Dioxide and a macrocrystalline variety of the Quartz family. The color of Rose Quartz has long been a subject of debate, with a number of different impurities believed to be the reason including Titanium, Manganese, and Colloidal Gold. Recent Studies have now proved through micro-analytical methods that the color of massive Rose Quartz is dude to microscopic mineral fibers. The rare transparent Rose Quartz crystals owe their color to Aluminum and Phosphorous impurities.

South Dakota adopted Rose Quartz as its official mineral in 1966.

Rose Quartz is believed to balance the emotions, giving inner peace and harmony. It is said to calm aggression and enhance sensitivity, compassion, patience and forgiveness while increasing self-esteem and self-confidence.

Physically Rose Quartz is believed to help treat depression and assist in weight loss. It can aid in the proper functioning of the kidneys, adrenals, sex organs, liver, lungs and heart. In addition to this, it is believed to increase fertility and protect against radiation.

Availability:
Rose Quartz’s pink color is unique in the mineral kingdom, making it a highly desired Quartz variety. Rose Quartz crystals are a rarity. In fact, when they were first discovered they were dismissed as fakes by mineralogist from around the world.

Sources:
There are known deposits of Rose Quartz in Africa, Australia, Canada, England, Germany India, Madagascar, Scotland, and the United States. The first Rose Quartz crystals were found near Rumford, Maine, though today most of the world’s supply comes from Brazil.

Evaluation:
Rose Quartz is rated at 7 on the Moh’s Scale of Hardness and special care should be taken when wearing it in jewelry as Rose Quartz can chip or crack relatively easily. Rose Quartz is generally opaque to translucent, exhibiting a pale and delicate powder pink color and occasionally a stronger rose-red color. The rare transparent Rose quartz crystals are usually so pale that not much color can be seen except in stones of large sizes.

Occasionally Rose Quartz contains microscopic rutile needles which are oriented in such a way that a star effect is visible, known in the gem trade as an asterism. This optical phenomenon can best be seen when a light source is viewed through the Rose Quartz. These particular gemstones are classified as Rose Cat’s Eye Quartz.

Rose Quartz is almost always found as solid masses and rarely occurs in crystals. This remains a scientific mystery because Quartz crystallizes into well formed crystals in all other macrocrystalline varieties, leaving no easily discernible reason why Rose Quartz crystals do not commonly occur.

Common Cuts:
Rose Cat’s Eye Quartz are most commonly and almost exclusively cut into cabochons. This is because a tall, round cut is required to maximize the striking Cat’s Eye effect most brilliantly.

Routine Enhancements:
There are no known enhancements for Rose Quartz.