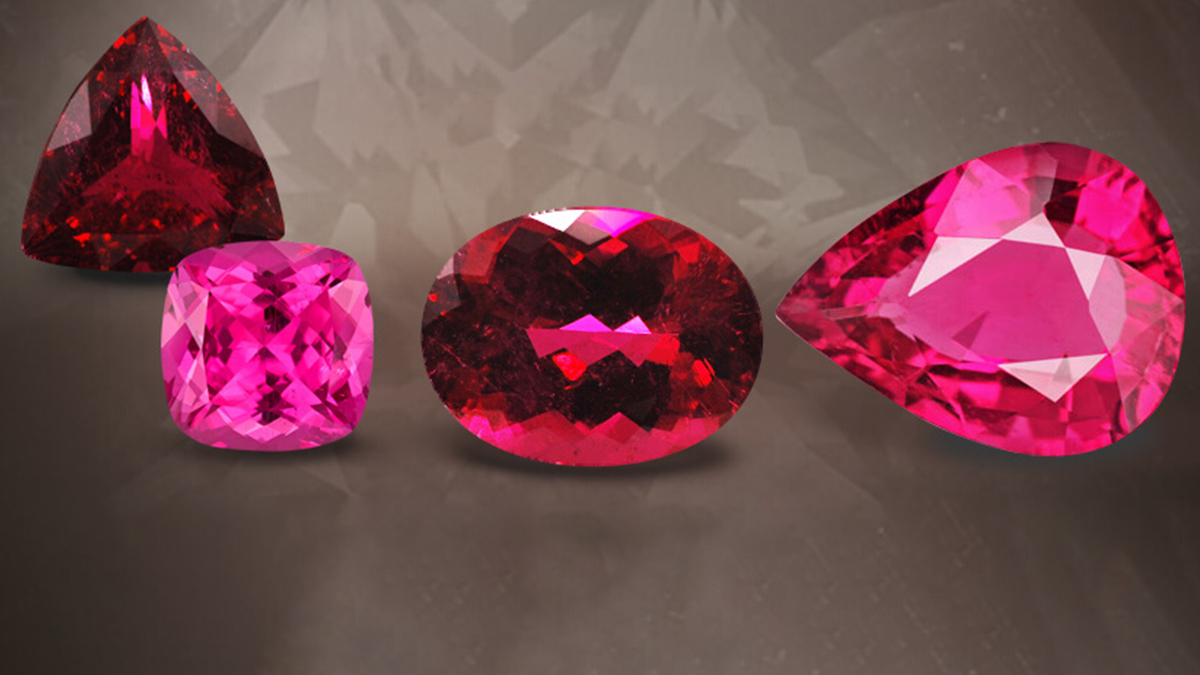 Chemical Make-up:
Tourmaline is made up of the complex Aluminum Borosilicate element, and depending upon the color of the gemstone, one or more of a number of metal ions, usually Iron, Magnesium and Lithium.

The name Rubellite is derived from the Latin word ‘rubellus’, meaning “reddish”.

Rubellite is believed to represent harmony, joy of life, and lust. It vibrates the heart chakra allowing the wearer to open themselves to many levels of love. Rubellite makes an excellent gift to your significant other as it heightens levels of passion, love, and seduction.

Availability:
Rubellite is one of the rarer and more expensive varieties of Tourmalines. Expect to pay a high premium on an eye-clean, deep ruby red colored Rubellite.

Found in an amazing variety, the sheer number of available Tourmaline colors is second to none and unmatched by any other gemstone. Tourmalines can be found in shades of blue, black, brown, colorless, green, orange, pink, red, yellow and other colors in varying shades and hues, varying from completely transparent to opaque. In addition to this there are also known occurrences of bi-color, tri-color, mulit-color and “Cat’s Eye” Tourmalines, ensuring that the Tourmaline truly is a gemstone that is available in a color to suit all styles and tastes.

A Tourmaline gemstone viewed from different angles will result in differing color intensities being visible. The only one thing that you can be sure of is that the deepest coloration will always be shown along the stone’s main axis.

Tourmalines can be found in various shades of pink and reds, though only a select few are given the title Rubellite. Rubellites can be found in colors ranging from pinkish-reds, ruby reds, to purple red’s granted one decisive characteristic is clearly displayed: its color shines as clearly and brilliantly in daylight as it does in artificial light. Should the color change when the light source changes, the stone will then be labeled as a Pink Tourmaline.

The darker colors of Rubellite tend to have more natural inclusions then other Tourmaline varieties. This is because during the formation process Rubellites are closer to the center of the crystal pocket, thus receiving more stress and pressure. Luckily such inclusions are tolerated for Rubellite and in some cases preferred as it adds character to the stone, assuming that such imperfections don’t conflict with stone’s light refraction.

Rubellites at the pinnacle of the value spectrum will be eye-clean, deep ruby red in color and will exhibit a high level of brilliance.

Routine Enhancements:
Rubellite Tourmalines are often heat-treated in order to lighten colors and to remove “silk” (a form of natural imperfection / inclusion). Some colored Tourmalines actually transform into other Tourmalines (most commonly the Achroite Tourmaline variety), during this heating process.