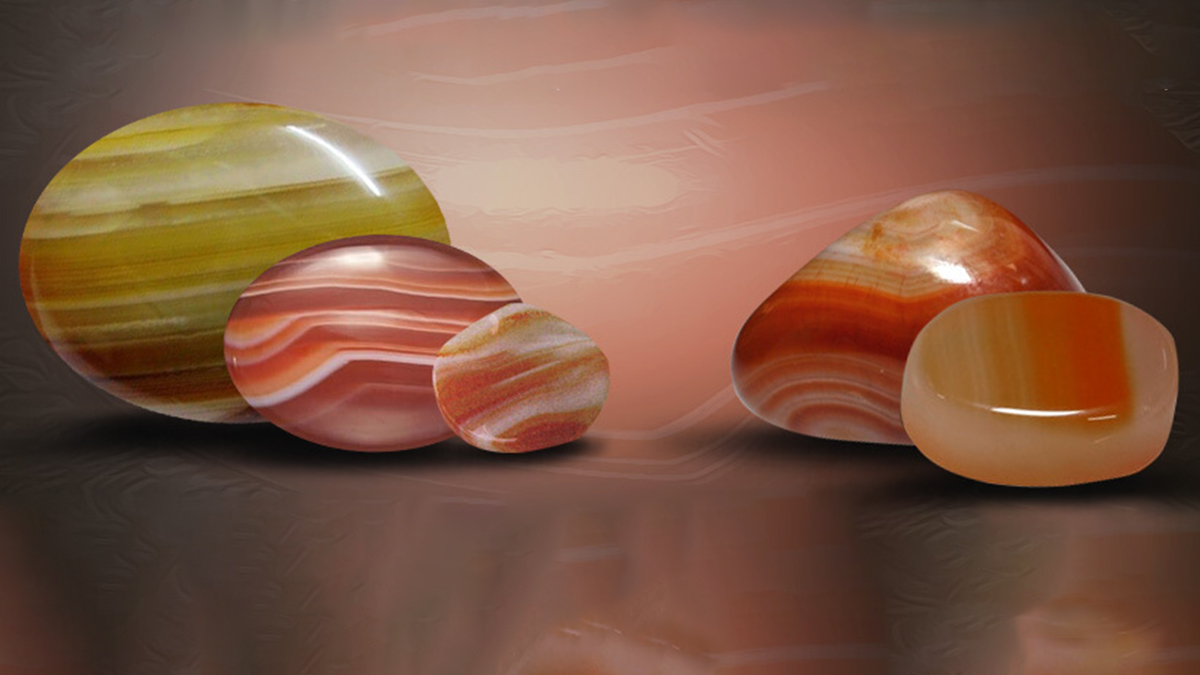 Birthstone Month :
Sardonyx is one of the official birthstones for the month of August.

Zodiac :
Sardonyx is associated with the zodiac sign of Leo.

Chemical Make-up :
Sardonyx is a Silicon Dioxide and a variety of Onyx, itself a member of the Chalcedony Cryptocrystalline Quartz family.

Legend says that a sleeping Venus had her divine fingernails cut off with an arrowhead by Eros/Cupid. He left the clippings scattered on the sand below, which later turned to stone because the god’s felt that no part of Venuses heavenly body should ever perish. Originally, in Greek times, almost all colors of Chalcedony from white to dark brown and black were labeled as Onyx. It was then later decided by the Ancient Romans that the term Onyx would only be used refer to the black and dark brown colored stones.

Sardonyx was highly valued in Rome, particularly for seals, because it was said to never stick to wax. The Roman General Publius Cornelius Scipio was known for wearing Sardonyx jewelry. Roman Soldiers often wore Sardonyx stones engraved with Mars, the God of War, to bring courage, fearlessness, and victory.

Sardonyx is believed to lead the wearer to honor, courage, success, and financial rewards. It is also believed to give self-control, protection, and can insure a happy marriage. In addition to this, Sardonyx is thought to protect the wearer from numerous infections and could restrain people from self-indulgences

Sources :
Some of the world’s finest Sardonyx gemstones are sourced from India. There are also known deposits in Brazil, the Czech Republic, Germany, Sri Lanka, the United States (Oregon and the Great Lakes Region), and Uruguay.

Evaluation :
Sardonyx is rated at 6.5 to 7 on the Moh’s Scale of Hardness and care should be taken well worn as it is prone to chips and scratches. Sardonyx contains layers of tiny quartz fibers stacked on top of each other so as to display a banded appearance. These layers of reddish brown Sard and Onyx range from translucent to opaque, exhibiting an attractive colored pattern of usually white, gray or black interspersed with reddish brown.

Sardonyx can be obtained quite easily at affordable prices. Sardonyx found with distinctive or extraordinary banded patterns and at larger sizes will demand premiums.

Common Cuts :
Sardonyx is most often found cut into smooth rounded cabochons. It can also be found as a backdrop in jewelry such as cameos.

Routine Enhancements :
Almost all Sardonyx that is commercially available today is dyed to increase color depth.

Care & Cleaning :
Sardonyx is best cleaned using warm soapy water and a soft brush. As with most gemstones, Sardonyx should be kept away from prolonged exposure to extremes of heat and household chemicals that can damage the stone. Sardonyx can chip or scratch relatively easily so it should always be stored in a fabric-lined box away from other jewelry items.