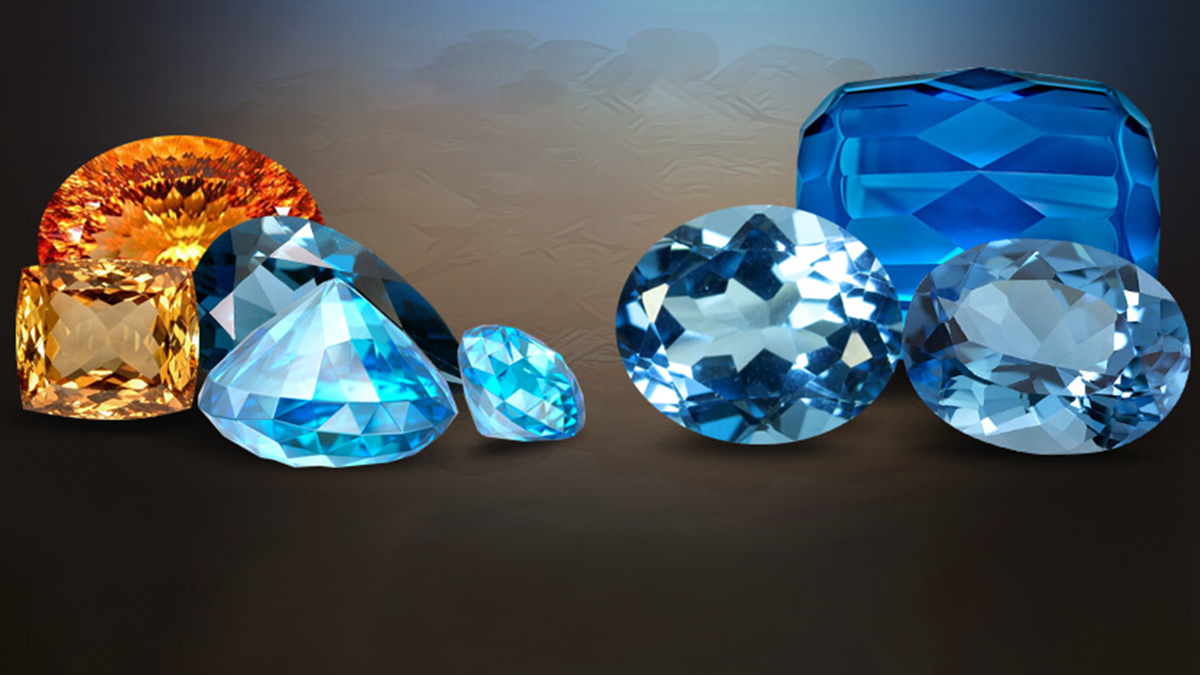 Zodiac:
Topaz is associated with the zodiac signs of Aries and Sagittarius.

History & Lore:
Topaz has long been related to desire and the name is believed to have been derived from the Sanskrit word ‘tapas’ meaning heat, fire and passion. It is also said to have been derived from the Greek word ‘topazos’ or ‘topazion’, meaning “to search.” Topazion was also the name of an island in the Red Sea which today is commonly known as Zebirget or St. John’s Island in Egypt.

The Egyptians believed that Topaz would protect them from harm because they believed it was colored by the sun god Ra’s golden arms. The Romans believed in a similar theory and associated Topaz with their sun god, Jupiter.

Topaz has also been biblically referenced as one of the gemstones used to make the ‘Breastplate of Judgement’ worn by Aaron.

Topaz is said to increase the wearers intelligence, creativity and wisdom, and can enhance one’s spiritual potential. It is also known to aid in meditation and in the divine manifestation of desired objects.

Topaz is said to bring physical and intellectual vigor, good health, and is said to offer protection against infectious diseases.

Availability:
Red and intense Pink Topaz tend to be the rarest of the Topaz family and are therefore reasonably expensive. Green Topaz is also rare. The bright Orange Topaz, also known as ‘Imperial Topaz’ tends to be easier to find, with Blue Topaz available in a wide range of cuts and sizes. Blue Topaz is also generally more widely available than the other colors because less attractive colored Topaz’s are heat treated and become blue in the process.

Sources:
Brazil is believed to be the World’s largest supplier of Topaz, though there are known deposits in Australia, China, Japan, Madagascar, Mexico, Myanmar (Burma), Namibia, Nigeria, Pakistan, Russia, Sri lanka (Ceylon), and the United States.

Evaluation:
Topaz is rated at an 8 on Moh’s Scale of Hardness and although relatively hard, blows should be avoided for they can cause the stone to cleave. Topaz comes in a variety of shapes, colors and sizes. Its brilliance and clarity are its chief attractions. A hard stone, Topaz is very difficult to scratch, although it can be brittle. Imperial Topaz occurs naturally in colors ranging from a light golden yellow to a deep reddish orange. Red and intense pink are the most rare and desirable colors for Topaz. A gem with these colors will command a relatively high price. Bright orange colored Topaz, also known as Imperial Topaz, falls into the moderate price range and is easier to find. Blue Topaz, having a low to moderate price range, is very popular, primarily because of moderate pricing and the availability of a wide variety of shades, sizes and shapes.

Common Cuts:
Blue Topaz can generally be found cut into most of the commonly recognized shapes/cuts. The other, rarer, more valuable Topaz colors are more often found in oval, cushion, and emerald cuts.

Routine Enhancements:
The type of enhancement differs depending upon the color and type of the Topaz. Yellow and Orange Topaz are occasionally treated with heat and/or radiation to intensify color. Green and Blue topaz are usually treated with heat and/or radiation to intensify depth of color, although much of the Blue Topaz in on market today was once less attractive colored Topaz examples that were treated to become blue. Brown Topaz is not known to be enhanced.

Care & Cleaning:
Though Topaz is a relatively hard stone, it has poor toughness due to cleavage. Care should be taken to prevent Topaz from chipping and scratching. As with most gemstones, Topaz should be kept away from sudden temperature changes that can cause permanent changes to the stone’s coloration. Topaz is best cleaned with warm soapy water and a soft brush. Topaz should be kept in a fabric-lined box away from other jewelry items as to avoid scratching.