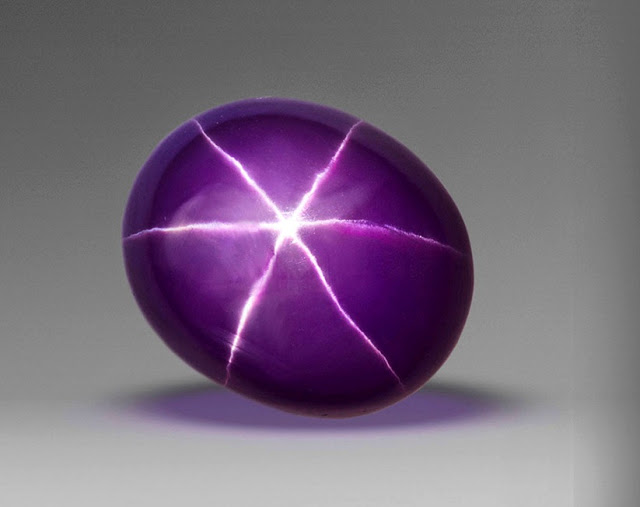 Asterism is a name applied to the phenomenon of gemstones exhibiting a luminous star-like shape when cut en cabochon (shaped and polished rather than faceted).

An asterism is an optical phenomenon displayed by some rubies, sapphires, and other gems (i.e. star garnet, star diopside, star spinel, etc.) of an enhanced reflective area in the shape of a “star” on the surface of a cabochon cut from the stone. Causes: Star sapphires and rubies get their asterism from the titanium dioxide impurities (rutile) present in them. The Star-effect or “asterism” is caused by the dense inclusions of tiny fibers of rutile (also known as “silk”). The stars are caused by the light reflecting from needle-like inclusions of rutile aligned perpendicular to the rays of the star. However, since rutile is always present in star gemstones, they are almost never completely transparent.

Gemstones that display asterism may exhibit four, six, and sometimes twelve rayed “stars”, depending on the inclusions, size, and facet. The typical asteria is the star sapphire, generally a bluish-grey corundum, milky or opalescent, with a star of six rays. In red corundum the stellate reflection is less common, and hence the star-ruby occasionally found with the star-sapphire in Sri Lanka is among the most valued of “fancy stones”. When the radiation is shown by yellow corundum, the stone is called star-topaz. Cymophane, the chatoyant chrysoberyl known as cat’s eye, may also be asteriated.See also: World’s largest blue star sapphire ‘found in Sri Lanka’ It is worth at least an estimated £68million ($100million)A distinction can be made between two types of asterism:

Epiasterism, such as that seen in sapphire and most other gems, is the result of a reflection of light on parallel arranged inclusions inside the gemstone.

Diasterism, such as that seen in rose quartz, is the result of light transmitted through the stone. In order to see this effect, the stone must be illuminated from behind.