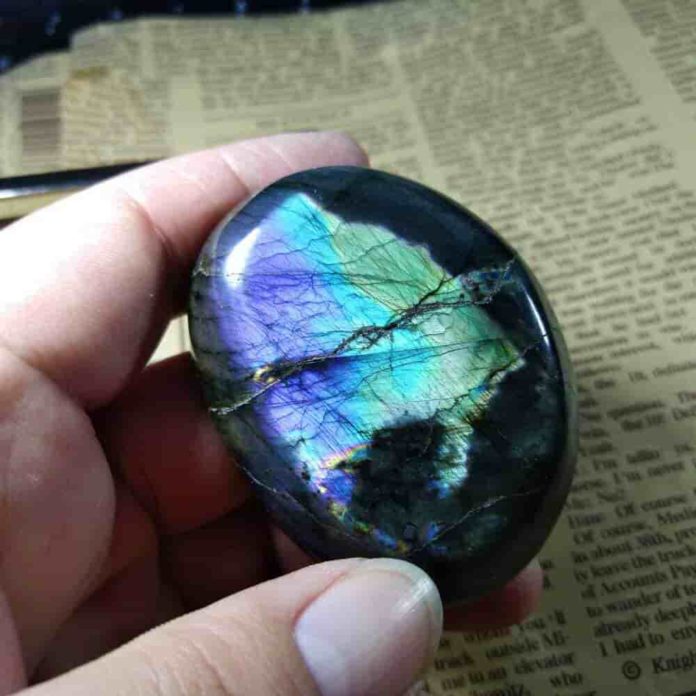 Moonstone is a sodium potassium aluminium silicate ((Na,K)AlSi3O8) of the feldspar group that displays a pearly and opalescent schiller. An alternative name is hecatolite The name derives from a visual effect, sheen or schiller (adularescence), caused by light diffraction within a microstructure consisting of normal exode layers (lamellae) of specific alkali feldspars (orthoclase and sodium-rich plagioclase).

Moonstone is an opalescent orthoclase type. Traditionally thought of as a stone of good luck and connected to a romantic desire, it was often given as a gift to lovers. Moonstone can be translucent with a strong blue hue on the surface, or it can be milky with the appearance of inner light. The ancient Romans had theorized that Moonstone, with its unfathomable glow, had been created by frozen moonlight. This beautiful gem variety shines with cool lunar light, but it is a mineral feldspar, very terrestrial in nature. The shimmer, called schiller or adularescence, is caused by the intergrowth of two different types of feldspar with different refractive indexes. Moonstones come in a variety of colors. The body color can range from colorless to gray, brown, yellow, green, or pink. The clarity ranges from transparent to translucent. The best moonstone has a blue sheen, perfect clarity, and colorless body color. Sometimes the moonstone has an eye as well as a glare. The similar feldspar form is known as Moonstone Rainbow. A variety of feldspar labradorite has a range of rainbow colours, from red and orange, to white, purple and blue. Sometimes a gem will reveal all of these colors. Fine moonstone is quite rare and becoming rarer. It is mined in Sri Lanka and Southern India. The rainbow variety can be found in India and Madagascar.

Moonstones are usually cut in a smooth, oval cabochon shape to maximize the effect. Sometimes it’s carved to display a man-in-the-moon head. Moonstone has a 6 to 6.5 hardness. It should not be kept in contact with your other gemstones to avoid scratching. Wash with a mild soap dish: use a toothbrush to clean behind a stone where dust can be gathered.

Types and Colours of Moonstone

Blue MoonstoneThe blue moonstone with its floating blue color on the surface is transparent and crystal clear. The most desirable rocks are of the strongest blue colour. The largest and best stones usually come from Myanmar (Burma), but the discovery of good stones became much more difficult and the price rose. Blue moonstone is sometimes faceted, however much care needs to be taken when working with it, as the material can be brittle and break under pressure.

The Rainbow Moonstone emerges from the empty orthoclastic inclusions and textures and has a milky patchy look. The reflection from the layers and inclusions generates a rainbow effect when the stone attracts light. This is a very common color play and is commonly used in silver jewelry. Rainbow MoonstoneThe scientific name for moonstone with rainbows is labradorite, and although the name is distinct from genuine orthoclase moonstone. Moonstone has a transparent, white color similar to “moonshine” which, when rolled, rolls or floats over the stone, which is why the term is called “moonstone.” A rainbow moonstone is typically a creamy translucent white stone with occasional (particularly blue) iridescent or painted flashes that varies from opaque to semitranslucent.

Moonstone Rainbow is best seen for playing color in the natural light. In the jewels of ancient civilizations Moonstone was used. The Romans thought that the moon was born from solidified moon rays. The Romans and Greeks combined lunar gods with moonstones. Moonstone became famous with the development of jewellery artists and goldsmiths during the Art Nouveau period in the early 20th century. The moonstone of Rainbow is present in various parts of the world, including China, India, Australia, Malagasy, Sri Lanka, and Russia. Because the feldspar mineral comprises 60% of the Earth’s crust, it is commonly found in small parts and smaller parts are much rarer.

Green moon is not as well recognized as a rainbow or a blue moon as the color game, but it’s still a lovely stone. This usually appears slightly white or transparent with a pale green-yellow colour. If you look down on the pier, like a full moon, you’re going to see a glow from inside. This optical effect is usually filtered out with a tall dome, and often a star of light on the top of the dome can be seen.

The term pink encompasses color, varying from honey to beige to peach. The stone has a white shine and often is seen with the appearance of a cat’s eye or a star. This type of rock is commonly used in painted bead columns.

The orthoclase feldspar is an essential mineral of the tectosilicate, or orthoclase orthodontic (endmember formulation KAlSi3O8). It’s a “straight fracture,” since its two cleavages are at right angles to each other. The name is of Ancient Greek. It’s a potassium feldspar type, also referred to as K-feldspar. The diamond (composed mainly by orthoclase) is called the moonstone.

Orthoclase is an expensive, colorless, pale yellow and transparent stone which has a white or shiny blue tone. The colourless variety, as seen on Mount Adular in Switzerland, is called adularia. Due to its fragile nature, orthoclase is usually seen as a step cut and is therefore not widely used or produced.

Amazonite is a mineral that is beautiful and opaque. It is either a blue-green or a blue and white streaked hue because of the presence of mercury. Even with the solid color content, the color pattern is typically erratic. Amazonite can come in various colors, including orange, purple, red and gray but it is the most popular and widely used blue green paint.