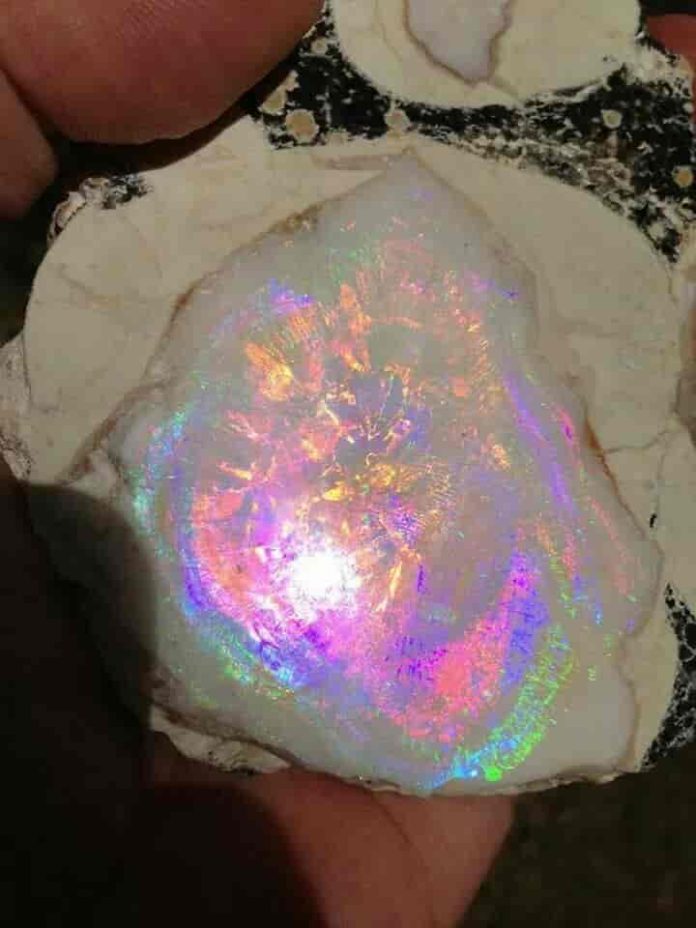 Geyserite is a type of opal silica that is often found around hot springs and geysers. It’s sometimes referred to as a sinter. Botryoidal geyseritis is known as fioritis. Geyser Opal “Spencer Opal” was formed in volcanic rocks around 4 million years ago by geysers. When a geyser would erupt, the water containing tiny silica spheres would create a thin layer of precious opal.

The main source of Spencer Opal Mines is the rhyolite and obsidian stream of gas pockets. The secondary deposit is a mixture of silica and water, collected inside the rock and released by a series of geysers. As a result of several eruptions over a period of time, the opal is deposited in layers. Most of the layers are thin, resulting in some of the most exquisite triplet opals in the world. Occasionally, the coating will be thin enough to slice a solid opal, which is an extra bonus for the finder. How the Opal is formed

The main source of the mine is the rhyolite and obsidian stream of gas pockets. Opal Solution, or silica, was a secondary product for geyser activity. As a result of several eruptions over a period of time, the opal is deposited in layers. Most of the layers are thin, resulting in some of the most exquisite triplet opals in the world. Occasionally, the coating will be thin enough to slice a solid opal, which is an extra bonus for the finder. Opal is hydrothermally deposited within hollow geodes in successive layers making Spencer Opal suitable for triplets as thin layers of extremely high quality precious opal are very translucent with a high color intensity. Opal doublets, often used in jewelry, are thin slices of precious opal attached to a matrix material. These gems are considerably cheaper than solid opals, but they provide the same color play. Opal doublets are sometimes coated with a thin layer or a transparent Quartz dome to make them more resistant to scratches (opal is a relatively soft gem). They’re known as triplets.

To make a triplet, the opal is ground flat parallel to the flame layer until the intense fire appears completely across the bottom. Then a flat piece of black Basinite or Obsidian is evaporated into a flat flame layer. The opal is again ground flat on the opposite side until the flame surface is revealed and reveals its maximum intensity against the black background. The opal should be about the thickness of the hair at this time. The Crystal cap is coated with epoxy and the opal is ground to its final form. This is how the Idaho Opal Triplet is made.

Colors of Opals and Their Vaule

Gems are taken from both the precious and the common forms, but the precious opal is the primary gem of this stone. There are many types of precious and common opals. The most attractive and beautiful type of opal is black opal, which is opal with a dark blue, dark green or black colored background. Next in value is white opal, which is opal with a light colored body color (black, green, cream, etc.) with a heavy color game. The next line is Mexican fire opal, a transparent to translucent orange red form of common opal. When Mexican fire opals exhibit colored game, they are known as Precious Fire Opal. In addition to being categorized as either black or white opals, most precious opals are further classified on the basis of the distribution and habit of their color play. There are also many names of varieties given to the numerous forms of both precious opal and common opal.


Where is spencer idaho?

Spencer is a city in Clark County, Idaho, United States. The population was 38 at the 2000 census. The city is noted as being the “Opal Capital of America”.[citation needed] The mine is located 5–6 miles outside of town.