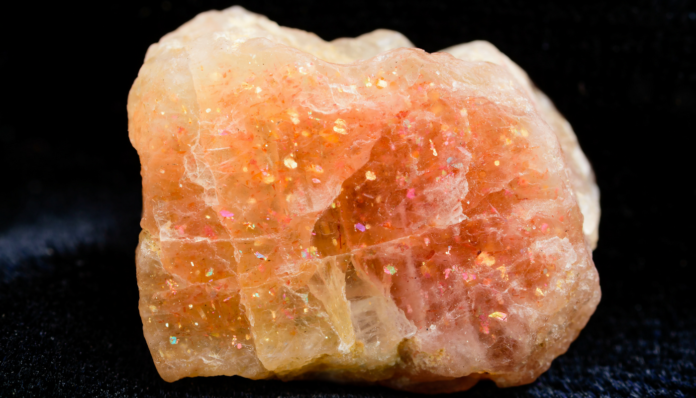 Sunstone is a crystal that exhibits a spangled appearance and a fascinating optical effect due to the reflections from the red copper in minuscule scales within its composition which are hexagonal, rhombic, or irregular in shape. These inclusions give the stone an appearance similar to aventurine. This is why sunstone is also known also as “aventurine-feldspar.”

The Physical Properties of Sunstone Sunstone is a plagioclase feldspar which is a group of common rock-forming minerals composed of albite, oligoclase, andesine, labradorite, bytownite, and anorthite. The middle part of this crystal sparkles. Sunstone comes in colors that range from yellow, orange to red-brown. The color is typically darkest in the middle and becomes lighter toward the outer edges. On the Mohs hardness scale, it rates 6-6.5. The History of Sunstone In the early 1800s, Sunstone was a rare gemstone and quite costly.

It would eventually become more widely recognized, more accessible, and less expensive. In the early 1900s in the US state of Oregon, there were reportedly Sunstone discoveries in ancient lava fields in Warner Valley. It was believed that the Native Americans in that area would have been the first collectors of Warner Valley Sunstones. Only in Oregon are sunstones found in fine gem quality. Oregon sunstone varies from clear, champagne, yellow, light pink, salmon, orange, and red to blue-green with intense red and blue-green as the rarest.

Sunstone would eventually be discovered in Greece, Russia, India, and Canada. The Lore of Sunstone According to Native American legend, a great warrior who was wounded by an arrow bled on the sunstones. The blood carried his warrior spirit deep into the stones, giving them the red color in the center and giving them sacred power. In India, Sunstone was worn as protection against intrusive or negative forces. And in ancient Egypt, it was believed that the radiance of the sun and the fire of the solar ray were carried by Sunstone, energizing Ra, the sun god. In ancient Greece, they also believed that the Sunstone represented the Sun God. Their sun god was Helios (or Apollo).

They believed that Sunstone invigorated and improved the state of the physical body and the spirit. The Metaphysical Properties of Sunstone Sunstone has physical healing powers. In fact, it stimulates self-healing. Sunstone treats chronic sore throats, reduces stomach tension and relieves ulcers. It is particularly helpful for people who suffer cartilage and spinal problems. Sunstone is the stone of abundance, revealing talents and attracting fame. It is an excellent crystal for competitions for drawing good luck and positivity. Wearers of Sunstone do so to feel alive and enthusiastic as it promotes vitality.

Sunstone is believed to enhance leadership qualities because it stimulates independence and originality. It is beneficial when you are starting a fitness program because of its energetic and uplifting abilities. It is also ideal for those whose occupations require them to be high energy throughout the day. Sunstone promotes self-empowerment and independence. It also acts as an antidepressant, increasing self-worth and confidence. It has the power to encourage optimism and enthusiasm.