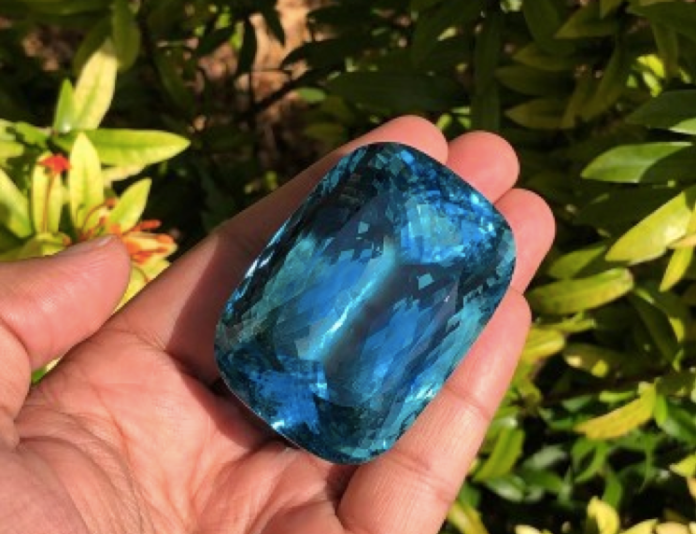 In 2020, Star Lanka is featuring the collector gemstone, which can be seen at the Tucson Gem Show. The respected industry leader is focusing on the blue gem with an emphasis on the sea.

Star Lanka is pleased to announce that they will be featuring the 465ct Royal Collection Aquamarine Gemstone at the February Tucson, Arizona Gem Show. The appearance at trade shows, such as the one in Tucson, is an opportunity to meet the Star Lanka team and see the prized collection of aquamarine gems. Attendance at one of the gem trade shows is an excellent opportunity to have a conversation with team members about specific gems or general information. Samples from the vast gem catalogue can be seen and handled by customers.

Star Lanka is featuring the March Gemstone, aquamarine, in its promotions for the year 2020. The latest catalog for the company features the color blue, and the sea. With its color ranging from pale to intense blue, the darker shades are particularly valuable. In fact, the Santa Maria, a dark blue gem, has been awarded its own trade name. The more intense color is highly valuable. Though the prized color was primarily mined from Brazil, recently, there have been several localities, namely India, Madagascar, and Mozambique, which offer color rivaling to its primary.

Additional details are available at https://www.starlanka.com/journal/march-gem-stone-aquamarine/

If a year is to be inspired by the sea, then there is no more fitting stone than Aquamarine. Its colors remind one of a peaceful sea at a paradise beach. Thanks to, not only its name, but also its amazing color, fans can expect to see more of this gemstone in 2020. Also, the stone has an ocean-related past, as it has been believed to protect sailors since ancient Roman times.  The gem is a member of the Beryl Family. The name ‘Aquamarine’ is derived from Latin word for seawater; a stone referred to the very essence of life on earth.

The story of Star Lanka begins in 1985, having been founded by Mr. Veera Salahudeen, a humble man with a passion for beauty. Since then, the company has been growing, steadily and consistently, into a reliable source for quality gemstones, with offices in Thailand and Hong Kong. The firm specializes in a variety of gemstones, from rubies to garnets, a wide range of semi-precious stones, and an extensive collection of Tourmaline.