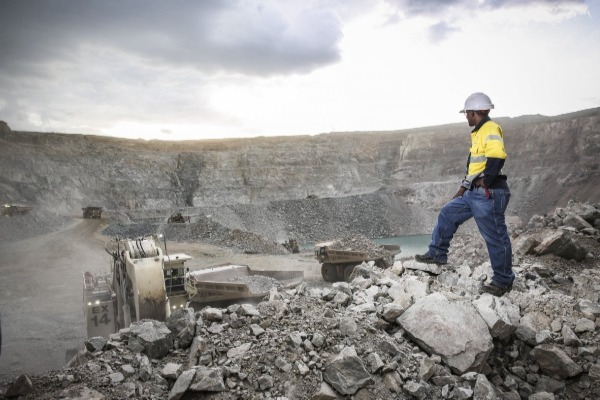 Resource-rich Zimbabwe is home to a whopping 800 mines, some of which were shut down or placed under care and maintenance in the past two decades, for various reasons.

These include a fall in the global prices of minerals, unfavorable economic conditions, hostile indigenization laws, operational costs and steep tax rates among other problems. However, as the new government seeks to lure
investors, it has relaxed indeginisation and local empowerment laws, exempting all minerals, except diamonds and platinum, from mandatory ceding of a 51 percent to locals.

Previously wary investors appear to have been charmed by the friendlier policy stance and are starting to show interest in grabbing mining and exploration opportunities. A sharp recovery in global commodity prices and the rising demand for minerals that are pivotal in the development of “clean fuels” technology, needed to reduce carbon footprints, has prompted the government to embark on a priority programme in which it seeks partners looking for
higher returns to invest in the revival of a number of mines that are of strategic economic importance.

Below, Mining Zimbabwe takes you through some ten mines that could offer higher returns if revived.

Although the mine is slowly getting back on track after it was placed under judicial management , following the suspension of operations in 2014, there’s no doubt that it still faces debt problems and also needs a massive cash
injection to ramp up operations. Located in Zvishavane in the Midlands, Sabi mine claims were first pegged in the 1890 with the first recorded production in 1909. It was acquired by ZMDC in 1984.ZMDC owns 100 percent of
Kimberworth Investments (Pvt) Ltd trading as Sabi Gold Mine, a company currently running the mine. It operates one rectangular double compartment shaft reaching down to 15 metres below a 12 level elevation. The principal
mining method is underhand stopping, while it has a capacity to treat 450 tons of ore per day. With bullion prices showing signs of robust recovery, this could be a good bet for investors.

Located in Silobela, 60 km outside Kwekwe, central Zimbabwe, Jena mines was first pegged in 1979, was later acquired by state mining company, the Zimbabwe Mining Development Corporation or ZMDC in 1984. It operates a multi shaft system. The mine has a capacity to treat 450 tons of ore per day. The mine employs underhand benching long-hole open-stopping and shrink stopping mining methods. With bullion prices showing signs of robust recovery, this could be a good bet for investors. The government is reportedly looking for funds to recapitalize the
mine, which had remained operational yet under care and maintenance due to financial problems.

Elvington Gold Mine, about 100 km west of the capital Harare, is also 100 percent owned by ZMDC. The mine suspended operations in 2003 due to the collapse of one of its main shafts. The mine is on care and maintenance. Currently the mine is involved in dump retreatment while preparing for resuscitation of underground operations. The aim of the sand treatment project is to see whether it is feasible to leach the sands. Elvington used to produce 45kg’s of Gold per month before the shaft incident. According to reports, the collapse of the mine in 2004 saw ore reserves at the mine shrink from a high of 1,3 million to 340 000 tons, with recommendations there is need for
extensive exploration to be carried out. According to ZMDC, further exploration to find out whether there are reserves left at the mine will justify the need for underground mining.

Shabanie Mine, located in Zvishavane in the Midlands province, used to be one of the biggest employers with
over 2 000 workers, but was shut down closed in 2004, due to low demand of white asbestos. Government has reportedly found an investor for the revival of one of the oldest mines in the country, although the details are sketchy, with planned electricity reconnection at the mine in preparation for its revival. Shabanie Mashaba Mine Holdings, the owner of the mine, has started renewing contracts for its employees, amid reports suggesting that the new government is keen to see to put the asbestos giant back in operation.

Kamativi Tine Mines, a wholly owned subsidiary of Zimbabwe Mining Development Corporation, closed operations in 1994 after 58 years of operation. The closure of the mine was prompted by the fall of the price of tin, the state miner has said. In its heyday, it produced tin and other by-products including tantalite niobium and lithium minerals. Kamativi mine is having renewed interest because of the firming tin prices and the large suite of
minerals associated with tin. ZMDC intends to resuscitate Kamativi in the near future. Recent explorations at the site indicated that that there were, in fact, more deposits of lithium at the mine than tin itself, with plans now afoot to dig for the so-called “white petroleum”, which is vital in new-general tech gadgets and electric cars.

Located in Kadoma District, Mashonaland West, Zimbabwe located about 92 km NW of Kadoma on the
Sanyati River, and 200km W of Harare, Zimbabwe’s three copper mines, namely Sanyati Mine and Alaska Copper mines, Mhangura Copper Mines and Lomagundi Mines are owned by the state miner. They were mothballed due to a slump in copper prices and an unfavourable economic and policy environment. However, Sanyati Copper Mine is reported to be having better prospects than, for example, Mhangura mine, which previously had major operations but was later closed in 2000. Feasibility studies and further exploration indicated the former had larger deposits of the mineral, according to state media reports. Efforts are said to be at an advanced stage to revive the mine in
the near future. The state miner is allegedly scouting for $500 million required to revive its three copper mines together with a new smelter and refinery.

Sandawana Mine is located nearly 100 km south of Zvishavane town in the Mberengwa district in the southern part of Zimbabwe. Emeralds were first discovered in 1955 at Sandawana. The mine was controlled by Gemstone Resources Limited, a British owned company following a sale from Rio Tinto Zimbabwe in 1992, but it has since been acquired by ZMDC. Sandawana hosts part of the Mweza Greenstone Belt and has great potential for emeralds, gold, tantalite, beryl, iron ore, silver, niobium, lithium, chrome, tin and slate. It consists of a number of emerald deposits including Ceres, Athene, Eros, Marmaid, Junc, Zeus, Atom, Plato, and Vulcan among others. Emerald occurrences are situated in a contact zone of pegmatite and tremolite schist along the southern slope of Mweza. Sandawana has been a major producer of emeralds for 40 years, until operations were suspended in 2011, with loss of traditional markets being cited.

The Karoi-based graphite mine, a joint venture firm between (ZMDC) and Graphit Kropfmhul Gmbh of Germany, is under care and maintenance. Production was discontinued in September 2017, with lack of capital being cited. It was recently reported by the state media that that Lynx Mine was negotiating with potential investors to secure long-term production.

The mine is located 270km south of Bulawayo, Zimbabwe’s second biggest city, and is owned by AIM-listed Premier African Minerals. Operations at the mine were suspended in January as the company said it was negotiating with a state empowerment company on a new funding model after the indigenisation law was relaxed by the new government. Premier says it has completed 1,302 metres of drilling to date with assay results awaited. The group has also embarked on an independent conceptual study with a view to establishing a code compliant resource and an early assessment of the potential to bring the mine back into production. The company has a diverse portfolio
of projects, which include tungsten, rare earth elements, lithium and tantalum in Zimbabwe, encompassing brownfield projects with near-term production potential to grass-roots exploration.