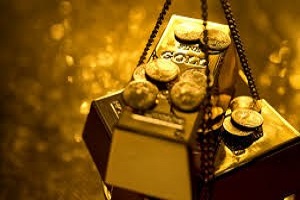 Gold prices in India continued to remain volatile, with rates edging lower for the third day in a row. On MCX, April gold futures were down 0.1% to 43,314 per 10 gram. Silver however saw a bigger decline, sliding 1.3% to 45,225 per kg. Gold rates have been volatile in India since hitting a record high of about ₹45,000 per 10 gram on profit-taking at higher levels.

In overseas markets, gold prices moved higher today as coronavirus fears were again on the forefront after World Health Organization or WHO declared it a pandemic. Spot gold rose 0.6% to $1,645.00 per ounce. Among other precious metals, silver gained 0.6% to $16.85 per ounce while platinum slipped 0.2% to $858.63.

Overnight, WHO’s announcement pushed the US Dow Jones industrials into the bear market territory with the index slumping about 1,500 points. To control the spread of the virus, US President Donald Trump has suspended all travel from Europe to the United States for 30 days.

Gold also got a support after the Bank of England on Wednesday slashed interest rates. It comes after US Federal Reserve last week announced an emergency rate cut and there are expectations that other central banks like Bank of Japan and European Central Bank may chip in with new measures to cushion the economic impact of coronavirus.

Gold had surged past the $1700/ounce level earlier this week as sell-off in crude oil rattled global financial markets. Supporting gold price is loose monetary policy stance of major central banks in wake of increasing threat from the virus spread, Kotak Securities said in a note. The coronavirus outbreak is likely to have far reaching economic impact and this may keep gold’s safe haven buying high, it added.

Also weighing on gold price are concerns about consumer demand in India and China. A surge in gold prices in India has hit physical gold buying but investment demand for the precious metal has surged in recent months. Gold Exchange Traded Funds (ETFs) saw a huge jump in net inflows to 1,483 crore in February, from 202 crore in January.