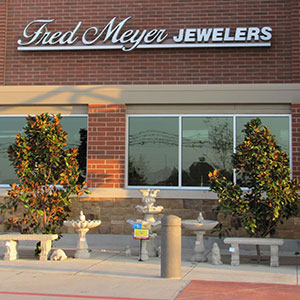 Fred Meyer Jewelers has announced that it is closing 71 of its stores inside Kroger Marketplace locations by the end of May.
The closings were announced last week and are seemingly unrelated to fears of the coronavirus. Prior to these closings, the chain numbered 242 stores, according to an official listing from its owner, grocery giant Kroger.
“In partnership with our parent company, Kroger, as part of our ongoing portfolio review, we have made the decision to close 71 Fred Meyer Jewelers stores inside Kroger Marketplace locations,” said a company statement.
The statement continued: “Kroger will repurpose the space with an eye toward their vision to serve America with food inspiration and uplift. Fred Meyer Jewelers will continue to operate more than 160 stores in Oregon, Washington, Idaho, Alaska, Utah, select malls across the country, and online.”
Once the second largest jewelry chain in the United States, Fred Meyer Jewelers has been steadily downsizing in recent years. In 2015, the chain numbered more than 320 stores—about double the number it expects to operate now.
In 2016, the company pivoted away from its traditional mall format and began opening more stores in Kroger Marketplaces, where it saw greater “synergy.” With the marketplace stores now being shut, it seems to be reverting back to the traditional mall format.
This is Fred Meyer Jewelers’ most dramatic pruning since 2018, when the company closed 30 mall-based stores in one quarter.
Fred Meyer Jewelers was founded in 1973 by Fred Meyer Stores, which, at the time, operated a wide variety of retail formats from drugstores to department stores.
In 1998, Fred Meyer Jewelers acquired 144 Littman’s Jewelers and nine Barclays Jewelers stores from Elangy Corp. That boosted Fred Meyer’s jewelry store count by one-third and gave it a presence on the East Coast.
That same year, Fred Meyer Stores merged with grocery giant Kroger, which has owned Fred Meyer Jewelers since.