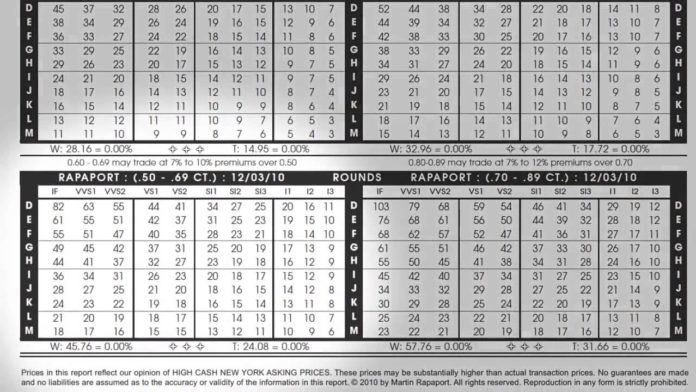 The Rapaport Group won’t publish a new price list for the next five weeks with the spread of COVID-19 bringing diamond trading to a standstill worldwide.

In a vote that closed Tuesday, Rapaport Group said 72 percent of RapNet members said they want to postpone publication of the next price list until Friday, May 1. (The Rap list normally comes out every Friday.)

Only about a quarter (28 percent) voted to continue publishing the price list every week.

The March 20 price list—the list that has caused an uproar among dealers—remains in effect until May 1.

Rapaport Group’s report on the vote follows a tumultuous couple of days in the diamond industry.

When the list came out last Friday, RapNet members noticed prices had gone down a substantial amount, a decision Rapaport Group Chairman Martin Rapaport said he made to reflect what he saw happening in the market.

“I am doing my job—to communicate diamond prices and to establish a fair balance,” he told National Jeweler during a Skype interview Sunday. “I can’t put out false information.”

In other words: don’t shoot the messenger.

The rollback angered dealers worldwide, many of whom countered that prices couldn’t have gone up or down because, as Diamond Manufacturers & Importers Association of America President Ronnie VanderLinden put it in a statement to members, the industry is operating “in a vacuum of zero trades” due to the coronavirus.

“If Rapaport was dedicated to maintaining stability in the marketplace, he could, and indeed should have, simply announced a suspension of his price list until this crisis is behind us. His actions have done nothing more than try to further destabilize a market in crisis,” the statement reads.

Rapaport told National Jeweler he will not consider rolling back the price cut but did organize the vote for RapNet members on suspension of the list—but at the March 20 levels.

Following the price cut, hundreds of diamond companies removed their diamonds from RapNet, with many vowing to find an alternative to the Rap list, which has been in use for 42 years.

Meanwhile, as the Rap list is suspended—and resentment over the price drop remains palpable—other platforms and organizations are stepping in to offer free membership or even launch new platforms.

News of these offers have been popping up all week as momentum built behind the movement to defect from RapNet.

Rapaport Group did not respond by deadline to email inquiries on how many companies have removed their diamonds from RapNet, but a source told National Jeweler Thursday morning there have been about 500 companies so far, witih a total of $5 billion in goods gone from the site.

A statement from the World Federation of Diamond Bourses, the umbrella organization for diamond trading halls worldwide, began circulating an announcement about the launch of a WFDB trading platform.

The trading platform will be open to all WFDB members from all bourses, and all transactions will be backed by its arbitration system, it said.

The organization said the new site will go live “in due course.” In the meantime, the Israel Diamond Institute has opened up its trading platform, Get-Diamonds.com, to all WFDB members.

Although the WFDB statement does not mention Martin Rapaport or RapNet by name, it does seemingly allude to the growing notion that the industry needs a replacement for—or, at least, viable alternatives to—RapNet, stating its new platform would “strongly contribute” to “healthy competition.”

IDEX sent out a letter signed by Chairman Ehud Cohen and Tamar Katzav, chief operating officer, stating it is making its diamond trading platform available for free to all newcomers until August. The letter also provided a link to contact information for its offices worldwide.

IDEX said its price index is updated every hour and is derived from its trading inventory of more than 700,000 polished diamonds.

Like WFBD, IDEX does not call out Rapaport by name, but the letter states in part, “We strongly believe that a bold, new vision is what will take us through this turmoil and beyond, to thrive and prosper once more.”

It also makes subtle references to other criticisms lobbed at RapNet. The IDEX price index is described as being “unbiased” and “accurately reflects price trends as they happen in real time, such as the drop of over 2 percent since the start of March.”

Last Friday’s drop in the Rap list was steeper, with prices down an average of 7 percent across the board.

Virtual Diamond Boutique circulated a reminder online that it “always was, always will be” free, and invited buyers to join.

And, on Wednesday morning, diamond marketplace Nivoda said it was freezing its prices to the March 6 Rap list because many members requested it.

The prices will remain frozen for a minimum of three months, giving the industry “time to decide how pricing will be handled going forward.”

“We believe, by freezing the price list, we will allow the discounts at which goods are sold to be the true indication of market prices,” CEO David Sutton said.