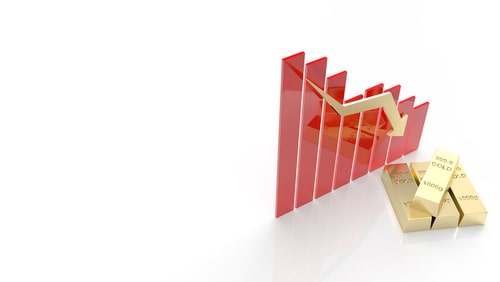 Gold and silver prices took a big step back on Tuesday as the highly anticipated price correction hit the precious metals market hard. Gold retreated more than $100 and silver shedded nearly $4 in just one trading day.

The move down is not too surprising as many analysts have been calling for a price correction after gold breached $1,920 an ounce, then $2,000 an ounce, and then continued to make new highs above that level. And all of this in just under three weeks.

“The precious metals complex, which posted a spectacular performance over the summer, was driven by a drop in rates, a steady increase in inflation expectations and a falling USD,” TD Securities head of global strategy Bart Melek said on Tuesday.

The turnaround came when the U.S. dollar showed some strength and real rates reversed direction.

“The rally is now giving up some of these gains as these drivers lose momentum. Real rates are now rising along with nominal yields due to stimulus optimism and risk appetite, with the USD also off its lows,” Melek pointed out.

Most of the interest in gold this summer is coming from Western retail investors, which also means that profit-taking is very much on the table.

“Specs and CTAs are reducing their gold and silver exposure, as volatility trends higher and as they take profits out of a crowded trade. The rapid rate of ETF gold and silver purchases, which have been a key driver for the summer rally, are also losing momentum,” TD’s Melek stated. “Given that the U.S. economy will continue to positively respond to an additional trillion dollars worth of fiscal stimulus and continued Fed measures, it is quite likely that rates and the dollar may see some better days into 2020.”

Gold could even drop as low as $1,890 an ounce before starting to climb back up, Melek pointed out. For silver, that low number could be around $22 an ounce.

“Given the technicals and the fundamentals, it would not be surprising to see spot gold trend down to around $1,890/oz and silver at around $22/oz, before hitting new records,” he said.

However, before these levels can be reached, investors should pay close attention to the Federal Reserve and any possible yield control.

“Before the complex hits new highs ($2,100+, $30+), there will need to be confirmation that the Fed will indeed suppress yields, consider average inflation targeting and there are signs that inflation may move higher. At the same time, markets will want to see if monetization of debt is in the cards, before talk of these levels becoming sustained is credible. TD securities projects an average gold price of $2,100/oz in Q4-2021 and $30/oz silver price during the same period,” Melek said.