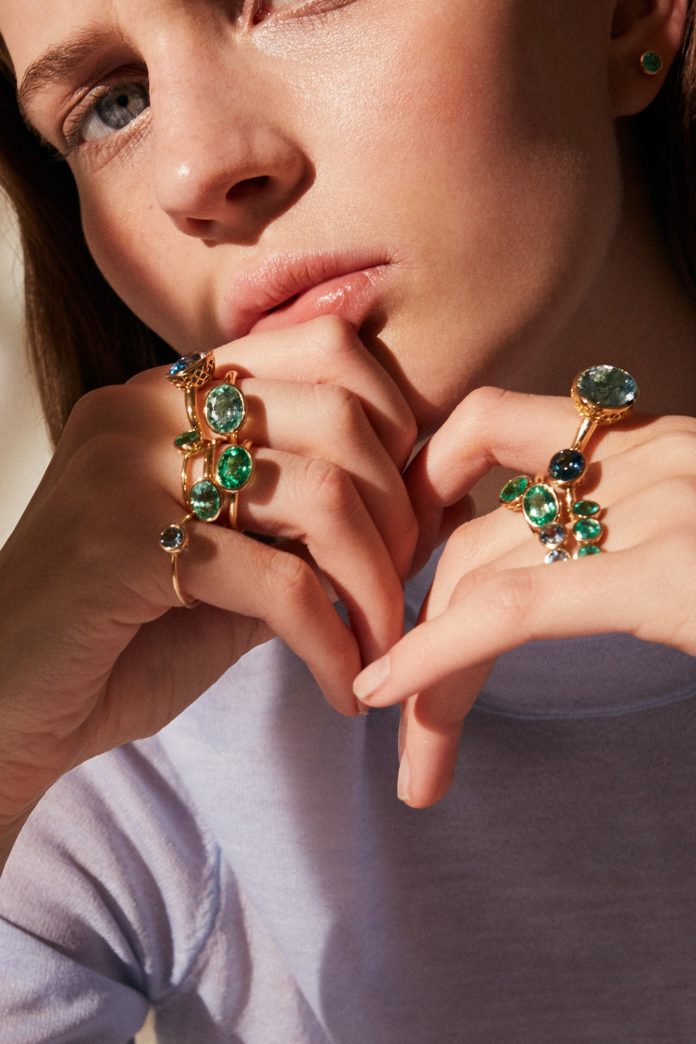 India has been synonymous with jewellery for centuries; extending beyond mere adornment, jewellery is embedded in the fabric of the country’s cultural history. Contributing to 29 per cent of the jewellery consumption worldwide and exporting a net 29.01 billion dollars worth of jewellery and gemstones, India today is an integral part of the global fine jewellery landscape. The recent rise of global independent fine jewellery brands, who build their businesses on transparency, has shone light on the exceptional craft associated with jewellery, made in India.

Most of the world’s nations have something unique to offer, but in a diverse country like India, each region has inherently established its own special offering. Jaipur, especially, has been long-known as a treasure trove for spectacular gemstones in a myriad of colours. While studying jewellery design at Central Saint Martins, Anna Molinari recalls her time visiting India, where she was exposed to “rubies, sapphires, spinels worn by maharajas” in abundance.

Interacting with opulent stones and gold can appear intimidating to most, but in India, the experience is deeply immersive. The approachable nature of the industry, coupled with the irrefutable skill and artistry residing within the country, has attracted many a designer over the years.

The home of exceptional craftsmanship

The value placed on goods made in India dates back to a time “just over 100 years ago, when Indian craftsmanship found its global stage—aristocratic women in London had their portraits painted by society artists such as Gainsborough, and wore Kashmiri shawls as a symbol of both their wealth and taste,” says fine jeweller, Alice Cicolini. Global designers are reviving this sentiment by integrating techniques unique to the country in their work.

Indian craftsmanship has always been recognised for being a maze of detail, something which Lebanese designer Noor Fares, embraces in her work. Renowned for her colourful modern-day talismans, that combine ancient symbolism and contemporary style, Fares works with a local artisan in Jaipur who specialises in hand-crafted ‘gemstone sculpture’. The nature of this work is complex as Fares’s designs can be intricate. But as French designer, Marie Lichtenberg shares from her own experience working with workshops in Mumbai and Jaipur—“Indian craftsmen have an exceptional ability to interpret and translate ideas into jewellery.”

While some of these global designers exclusively work with Indian techniques, Molinari who produces with a small team of artisans in Kolkata, marries the traditional French jewellery technique of ‘mise a jour’ with the long-established traditional technique of ‘Jali’ work—a lattice or metal mesh technique used to ornate fine jewellery. Adding to their existing repertoire of skills, Anna spent time with her artisans, teaching them the art of ‘mise a jour’. She says, “This technique is a real union between both cultures which I am very proud of. It took us many months to develop our style.”

Alice Cicolini, known for her modern interpretation of the 16th century-old technique of minakari, believes that craftsmanship needs patronage. “It takes only two generations for craft skills to be lost within a family. Every craftsman that departs his profession or chooses not to teach it, constitutes a loss to us all.” For Alice, the value goes beyond “just an expression of superlative beauty, but recognising the role we play in supporting the ‘handmade’ as a contribution to a sustainable future for luxury”. These designers are not only celebrating craft but have the utmost respect for preserving it.