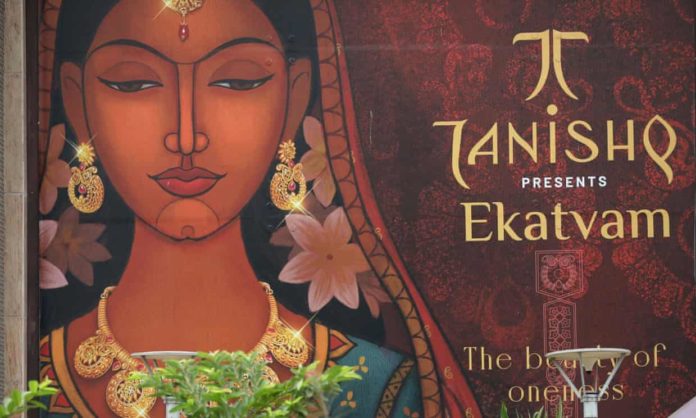 The advertisement featured a Muslim man and his Hindu wife preparing for a Hindu-style baby shower. Its tagline read: “A beautiful confluence of two different religions, traditions and cultures.”

But on Tuesday, just days after the 45-second advertisement aired, the Tanishq jewellery brand withdrew it from TV channels and its social media platforms following accusations from Hindu nationalists, including members of Narendra Modi’s ruling Bharatiya Janata party.

The withdrawal of the advert drew sharp criticism from many in India who said the company was succumbing to rightwing extremists.

It also shed light on the country’s growing religious polarisation under the prime minister, Modi, whose party and supporters envision the country as a Hindu nation and who are accused by critics of normalising anti-Muslim sentiment.

Tanishq said in a statement on Tuesday that the advert was meant to celebrate diversity but that it had decided to withdraw it due to the “divergent and severe reactions”. It said the decision was made keeping in mind the “wellbeing” of the company’s employees and partners. The jewellery brand is part of the Tata Group, one of the largest conglomerates in India.

It is not the first time an Indian brand has faced the ire of Hindu nationalists. Last year an advert for a detergent powder faced criticism after it sought to promote its brand showing Hindu-Muslim harmony. It showed a Hindu girl saving her Muslim friend from getting smeared with coloured powder during the Hindu festival of Holi. The advert drew calls for a boycott and was accused of being “Hindu phobic”.

Shashi Tharoor, a politician in the opposition Congress party, posted the Tanishq advert to his Twitter account on Tuesday, saying: “Hindutva bigots have called for a boycott for highlighting Hindu-Muslim unity through this beautiful ad.” If the ad “irks them so much”, Tharoor wrote, “why don’t they boycott the longest surviving symbol of Hindu-Muslim unity – India?”

Critics of Modi say India’s tradition of diversity has come under attack since his Hindu nationalist BJP won power in 2014. The party denies the accusation.

An apparent mood of fear, anger and disenchantment is growing among Indian Muslims who say Modi and his party are slowly disenfranchising them, leaving the community reckoning with a future as second-class citizens. At the heart of this feeling are the policies and rhetoric of Modi’s party and some of its leaders who have publicly given hate speeches against Muslims.

India is a predominantly Hindu country, with Muslims making up about 14% of the country’s 1.4 billion people.