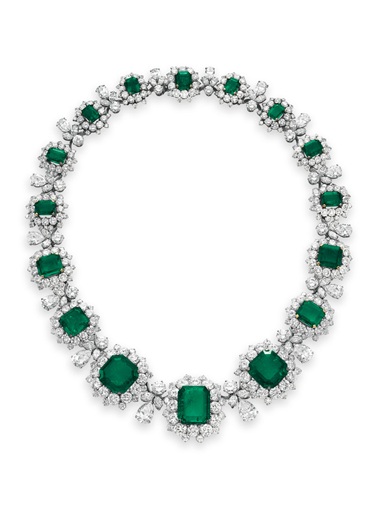 Renowned for their striking colour, emeralds have been a subject of fascination since antiquity — with Ancient Roman nobleman Pliny the Elder supposedly having claimed there is ‘no gem in existence more intense than this’.

Emeralds were famously adored — and acquired in vast amounts — by Cleopatra, who was so enthralled by the gem that she had her own mines in Egypt, filled with men whose lives were dedicated to finding her jewels. Although few remnants of the original mines survive, the two largest — Sikait and Zubara — can still be found on different slopes of Mount Smaragdus, or Emerald Mountain.

While emeralds in antiquity were mined in Egypt, India and Austria, the best and most famous emeralds are found in two renowned mines in Colombia — today, the world’s largest provider of emeralds, responsible for more than 60 per cent of world production. Other major suppliers include Brazil, Zambia and Zimbabwe.

The first of Colombia’s most famous mines, Chivor — named after the Chibcha people who once owned the land — first opened under Spanish control in 1537. Thirty years later, the most prolific emerald mine in history was discovered 60 miles north of what is now Bogotá: Muzo.

Muzo has provided some of the most famous emeralds in history, including the Devonshire — an uncut stone weighing an enormous 1,383.95 carats, named after the 6th Duke of Devonshire, who was given the stone by Emperor Dom Pedro I of Brazil.

The importance of colour, clarity and saturation

When grading gemstones, colour is normally by far the most important criterion — although with emeralds, clarity comes a close second. The most coveted stones possess both a verdant green hue and a high degree of transparency.

For a gem to be considered an emerald, it must be medium to dark in tone — with lighter-toned gems known instead by the species name green beryl. A high saturation of green is also highly desirable.

It is natural for emeralds to feature inclusions and surface-breaking fissures — indeed, it is so common for emeralds to be flawed that a ‘clean’ stone is said to be virtually unknown. Jewellers call these inclusions jardin, or garden, because they are said to resemble mossy wilderness, ‘growing’ within the stone.

The use of oils and polymers

The majority of emeralds are treated in some way, in order to fill surface-reaching cracks, and to improve their clarity and sometimes their stability. Common treatments include the use of oils and polymers.

Because treatment is so common, it is classified on a four-step scale: none, insignificant, minor, moderate and significant. While it is accepted, the degree of treatment can reduce value: untreated emeralds of similar appearance would take on a far higher value, owing to their extreme value.

Emeralds can be cut in a variety of ways, the most popular of which is the rectangular step-cut, commonly known as ‘the emerald cut’.

Beads and cabochon cuts are also popular. Unlike faceted cuts — which are geometric in form — cabochons are gemstones that have been shaped and polished, normally resulting in a rounded shape with a flat reverse.

If history has demonstrated emeralds’ enduring popularity, today’s market shows a growing appreciation for the gem. Market prices in recent years have been high, with buyers demonstrating an increased interest. One thing is clear — emeralds are hot right now.

The birthstone for those born in May

Finally, according to the Gregorian calendar, emerald is the birthstone for those born in May. These gems make a perfect gift for those with May birthdays — although, of course, emeralds make a beautiful addition to a jewellery collection at any time of year.

Source and full story at : https://www.christies.com/features/Collecting-Guide-Emeralds-9906-3.aspx

Know all about the healing properties of gemstones

For Amethyst, It’s Not So Easy Being Green

15.53 ct Pearl Discovered in Edible Oyster from the Ostreidae Family