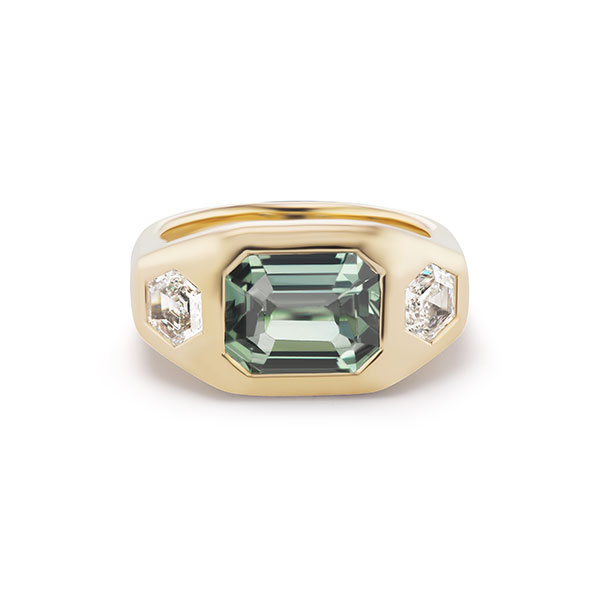 Few people have a better perspective on the colored stone market than Stuart Robertson, vice president of Gemworld International in Glenview, Ill., publisher of The GemGuide. Not only is Robertson connected to retailers and dealers across the country and around the world, but he also has the benefit of more than two decades of experience in pricing gemstones (he joined Gemworld as research director in 1998).

Below, Robertson talks to JCK about what has set independent retailers apart in the 2020 marketplace, why prices of loose gems have remained steady during the pandemic, and which trends he expects to impact the market in 2021.

“The gem industry, specifically colored stones, has weathered this crisis a lot better than people expected,” Robertson says. “People want to treat themselves to something new.”

You’ve talked about independent retailers doing much better than chain jewelers this year. Can you speak to that?

A lot of mom-and-pops have benefited from a couple things: They tend to be small enough that they could adapt to these conditions more effectively. They tend to be family-owned stores, so you have more leeway in how you handle staffing and hours. And most importantly, they tend not to be in malls.

What we’ve seen as the pandemic has carried on, there’s been a real swell within neighborhood communities to protect small businesses, and a lot of mom-and-pop jewelers found people shopping them who otherwise would have been on vacation, dining out, or going out to the movies.

Overall price points have probably dropped a little bit, but there’s definitely business for the jewelry industry. People are fed up with COVID and want to treat themselves. The really big stores, the mall stores, are far more expensive to operate, and they have been really hammered. That’s not a place a lot of people are really comfortable walking.

How is the dealer community managing through this year of crisis?

Those with good relationships with neighborhood stores have done well. Some have taken their inventory and run trunk sales. Are they doing great? No, but they’re doing okay. A number of dealers started to become nervous about the market, and those with means started to invest in better-end color—some people are using it as a vehicle for wealth preservation.

And what’s happened with colored stone prices this year?

At retail and with consumers, prices have been stable to even a little higher. The reason is logical: As the pandemic started to gain a foothold, it moved from east to west, so you have gem-producing areas that got hit by this before the U.S. Especially in the small-scale operations, things shut down before any glut of material formed in the marketplace. This is different from the 2008–2009 recession when things in the U.S. started to slow down, but production kept moving. Now there is a shortage of goods in the supply chain and even if you could mine stones, you can’t easily get them to cutting centers and back. Transportation is still disrupted.

The bottom line: We’ve seen prices throughout this whole period being stable or even moving higher because dealers recognized if they sold something they couldn’t immediately replace it, so there’s no incentive to consider dropping the price. To the credit of the whole gem and jewelry community, there didn’t seem to be anybody looking to leverage the situation to their benefit. Nobody beating up their dealers on price. Everybody recognizes this is a completely unprecedented period.

What trends are you seeing in the gemstone marketplace as we head into the new year?

I think 2021, the mere fact of changing the calendar, is going to reap a level of optimism that will probably carry the market for a fairly decent first quarter or two.

Other factors that have become apparent during the pandemic: It’s not so much what colored stones are selling, but how they’re selling. In source localities—Colombia and other places, for example—there has been an appreciable increase in the number of young dealers getting into the market, but doing so through social media. They’re seeing stones, both cut and not cut, near the source and putting them up for sale on Instagram and selling them before they’ve actually bought the stone. So they’re able to operate with very little capital investment. This use of social media is worth watching. It has the potential of changing the structure of how things move in our marketplace because people are accessing stuff at the source and selling it to consumers.

What are you seeing as far as trending colors and gem varieties?

Same as we saw earlier: gray spinel and gray sapphire. For the longest time, stones that were gray were not strong sellers. Now, gray is one of the colors doing well. We’re also seeing a lot of interest in American stones. Montana sapphire sells well—it’s not the traditional blue that’s selling, it’s the teals and the blue-greens we see interest in.

We’re also seeing price points are a little lower in what consumers are looking for. They’re shopping a little more cautiously. They still want finer stones but maybe a little smaller. Or they’re looking for tourmalines or garnets instead of rubies.

Garnet—demand has really blossomed. Spinel is doing okay in certain colors. Agates, things that are opaque, have started to do well again.

Any tips for retailers as they gear up for the final month of the 2020 holiday season?

We don’t know for sure to what extent there may be another wave of the virus, but the availability of goods is not going to be as free as it’s been over the last few years. There’s not a lot of travel in and out of the U.S. by dealers because of quarantines. So if there are things you need, it’s not a year to wait until the last minute. There’s not enough better-end material in the marketplace to allow for that. If it’s available and you need it, then buy it.

GSI Offers New Screening and Detection Service to the Industry