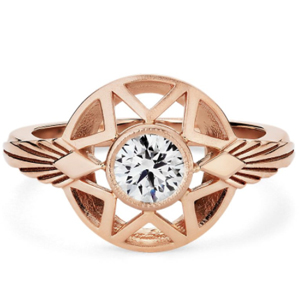 The parameters were finite: Each ring design had to feature a diamond smaller than 1 ct. that was mined, cut, and polished in Botswana (the diamonds bear the inscription “Botswana Ten/Ten”), and the price of the ring had to be relatively accessible—between $3,000 and $4,000.

We’ve been eager to lay eyes on the rings since first writing about the Ten/Ten collaboration in December. And now they’re out! The very limited-edition collection of 100 commitment rings (that’s 10 of each design) was unveiled today on Blue Nile.

Ten/Ten was specifically designed to promote diamonds from Botswana, a nation with an economy that relies heavily on its mined diamond trade. The 10 independent jewelry designers were chosen “for their unique and distinct points of view,” according to a statement from De Beers. They are: Catherine Sarr of Almasika, Aurora Lopez Mejia, Bea Bongiasca, Lauren Harwell Godfrey of Harwell Godfrey, Lola Oladunjoye of Lola Fenhirst, Marla Aaron, Michelle Fantaci, Natasha Tsimmerman of Platt Boutique Jewelry, Pamela Love, and Wing Yau of WWAKE.

All 10 designs bear the aesthetic footprint of their designers; it would be fun to scatter them on a table like jacks and see if you could guess which designer conjured which design. But for jewelry lovers, it would be an easy game. How could Bea Bongiasca’s ring not include an enameled “vine”? What’s a WWAKE ring without an offset diamond, or a Harwell Godfrey piece without a geometric shape? And it could hardly be a Marla Aaron offering without a few moving parts.

Here are all 10 styles from the Ten/Ten collection: