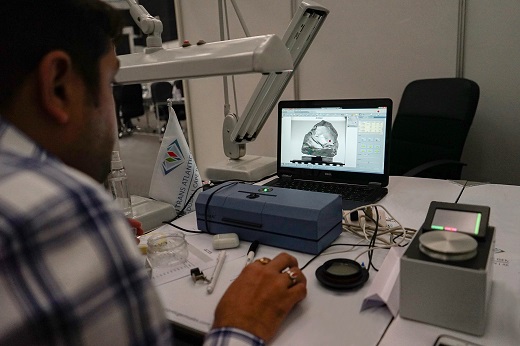 The success of the emirate’s diamond market depends on whether Indian buyers continue to make the journey.

RAPAPORT… Dubai has become something of a focal point for the diamond industry during the pandemic. While the United Arab Emirates (UAE) imposed a lockdown in the spring of 2020, the country has been more open than many since easing its restrictions in the summer. This, combined with being only a three-hour flight from India, has made it a popular location for rough sales while other centers were shut.

De Beers, for instance, hosted viewings of sight goods in Dubai from July onward, as many customers could not travel to the usual venue in Botswana. Rough trading through the Dubai Diamond Exchange (DDE) totaled AED 91.8 billion ($24.99 billion) in 2020, with 19 rough and polished tenders taking place on the premises, the bourse reported this week. Three companies held inaugural rough tenders in Dubai in January.

Yet the openness has come at a price. Although the emirate requires Covid-19 tests on arrival, infections skyrocketed in January as tourists flocked in for winter vacations. Dubai to London was reportedly the world’s busiest flight route in January, at a time when a new coronavirus variant first detected in the UK was spreading around the world. Daily virus cases across the UAE rose from around 1,200 in late December to a peak of around 3,700 a month later, before tailing off slightly, according to data site Worldometer.

“The New Year shenanigans in Dubai were an obvious super-spreader event,” the UK’s Financial Times cited an anonymous expatriate doctor as saying. “After that, cases have gone up quickly, and we have the new variant too.”

There’s little indication the city will return to a strict lockdown or shut its borders, as its economy relies on tourism and international commerce. But questions are arising about whether the policy is sustainable, as well as whether other countries — most importantly, India — will start banning flights from the UAE, as the UK did in late January. Around 90% of rough buyers are from India, tender organizers said.

“Dubai tendering relies on Surat travel. If that stops, then it will mean very few attendees,” said Antony Dear, head of sales at Grib Diamonds.

Antwerp-based Grib still plans to hold its scheduled viewing of auction goods in the emirate next week. De Beers also intends to offer viewings in Dubai for its February sight, which begins next Monday, a spokesperson for the company said.

Trans Atlantic Gem Sales (TAGS), which holds 10 tenders a year, noted that several companies that planned to attend its January tender in Dubai had canceled because their representatives tested positive on arrival in the UAE. Attendance from places other than India was already restricted because of travel rules, according to Mike Aggett, CEO at TAGS, whose next tender begins February 24.

“We had a lot of people scheduled to come in from Israel and Belgium, and probably half of them were unable to for health reasons or simply restrictions on travel,” Aggett told Rapaport News in an interview this week. “But so long as flights are coming in from India, there is the potential to run successful tenders in Dubai.”

Stargems chairman Shailesh Javeri expressed a similar sentiment, noting that diamantaires from Surat and Mumbai were continuing to come. The trading group sold $87.5 million worth of rough diamonds — a Dubai record — in December, and has another tender running this week. It expects to hold the next one in late March.

“The Dubai Diamond Exchange has seen a strong start to 2021, and hosted a range of successful tenders, all under very strict health and safety precautions,” a spokesperson for the state-run Dubai Multi Commodities Centre (DMCC) said in a statement Wednesday. “The DDE is confident of, and looking forward to, facilitating global diamond trade in the weeks and months ahead. Interest in staging diamond and precious-stones tenders at the facility remains high.”

However, the tender houses would face a challenge if the situation worsened. Most of them lack the infrastructure that allows larger companies, such as De Beers and Alrosa, to sell remotely.

Stargems will send goods for sale in Surat if it cannot bring buyers to Dubai, as it did in 2020, Javeri pointed out. Meanwhile, TAGS is considering using Sarine Technology’s Galaxy reports to enable buyers to inspect single stones without seeing them in person, and is aiming to make its assortments more consistent. This would help customers buy parcels from afar, but the project could take several months, Aggett explained.

Ultimately, the key factor will be whether Indians are allowed — and willing — to make the journey.

“If [the authorities] say, ‘Right, no flights in from India,’ then that would have a severe impact,” Aggett concluded.