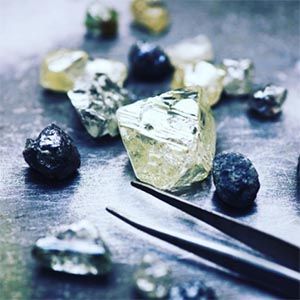 No one will say that 2020 was a good year for the diamond industry—or the world. But for De Beers, at least, 2021 is starting on an upbeat note.

The company could use it. Its recent financial results are almost a sea of down arrows: Total sales decreased by 27% to $3.4 billion, with rough diamond sales falling 30% to $2.8 billion. De Beers produced 18% less diamonds last year. Underlying EBITDA (earnings before interest, taxes, depreciation, and amortization) decreased by 25% to $417 million.

That EBIDTA number is particularly interesting in that it was almost all generated in the second half of the year—when those earnings hit $415 million. In the first half, the number was a far less $2 million.

All in all, De Beers posted a $102 million loss for the year. It hasn’t shown a loss for nearly a decade, when, following the financial crisis of 2008, it needed a cash injection from its owners.

Speaking from London, De Beers CEO Bruce Cleaver says that 2021 is starting off on a good note, but he includes a note of caution with his optimism.

“I do not think we are out of the woods,” he says. “I don’t think anybody can tell you what’s going to happen next, but there are more signs of hope than there were six months ago.

“The fourth quarter in America was pretty good, all things considered, and Chinese New Year was also pretty good,” he adds. “We’ve had some great positive signs, and we’ve had some benefits from people not traveling and maybe not going out to restaurants. It’s good to see that people are still invested in the [diamond] category. I think the industry will need to remain cautious. Making guesses as to what consumer demand will be in 2021 is not easy.”

All in all, De Beers played it cautious over the last year, slashing prices and allowing clients unlimited deferrals.

“In the middle of last year, it was impossible to sell a diamond, and I think we did the right thing by not selling any at the time,” Cleaver says. “Demand and inventory levels are certainly better than they were six months ago. If we didn’t take the lead and take production off the market like we did in April, May, and June, that would be a real challenge.”

There have been reports that De Beers has raised prices for three sights in a row. While Cleaver won’t comment on the current sight, he notes that “in two previous sights, we were able to raise prices. People forget we dropped prices a lot in 2020 so we are just clawing some of that back.”

De Beers also spent a lot of the last year reorganizing itself and it “dramatically cut costs, including capital expenditures,” Cleaver says.

“There have been silos that shouldn’t be there. We have mining, and rough sales, and our retail brand. There has been criticism in the past that people on our marketing side weren’t quite as in sync with people on the sales team. So we’re taking out some cost and we’re trying to link those businesses more with technology and with data.”

The marketing team has been reshuffled, so now all the brands are under the De Beers umbrella.

On the topic of lab-grown diamonds, Cleaver says the company has seen a “mixed” picture.

“Clearly, there’s more volume being sold, which is hardly a surprise given how much more production there is. But also, the data we’ve seen is that LGD prices continue to come down, and came down quite a lot during the Christmas period, not just at wholesale but even at retail. I think you’ll see the two markets start to bifurcate with price as the differentiating factor.”

SCS Global Services recently introduced a sustainability certification for diamonds, which is open to miners. However, for the moment, De Beers is sticking with the Responsible Jewellery Council.

“I’d say, at this point we probably [won’t get involved], but we will be open-minded on it and look for better ways to do [things],” Cleaver says. “Sustainability is important to consumers, and more and more are starting to ask these questions about where the diamond came from and what good does it do. The natural diamond industry has a great story to tell but we need to do a better job of telling it.”

He notes that De Beers has spent a lot of time talking with young millennial and Generation Z designers and taking them on trips to Botswana.

“They had no idea” about the importance of diamonds to Botswana, he says. “It’s one thing to tell the story, but when you see it in action it’s very different.”

He’s particularly proud that the company has helped producer countries deal with COVID-19.

“Pretty much all the testing machines in Botswana and Namibia come from us,” he says. “The governments couldn’t get them any other way.”

Overall, despite the year that was, the generally taciturn Cleaver feels the industry has reason for confidence.

“If you told me or any of our retailers a year ago what we would go through in 2020, I don’t think anyone would dream we would be in a position where are today,” he says. “All in all, we’ve done really well.”