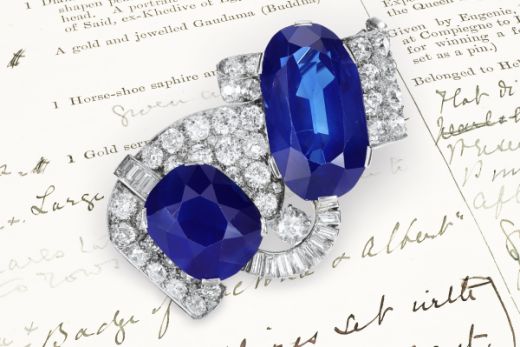 RAPAPORT… Sotheby’s will sell a 55.19-carat Kashmir sapphire at its Geneva sale — the largest gem of its kind ever to appear at auction.

The oval-cut stone, set in a brooch with a cushion-shaped Kashmir sapphire weighing 25.97 carats, surrounded by circular-cut and baguette diamonds, is from the 1930s, Sotheby’s said Monday. Previously in the collection of Maureen Constance Guinness, marchioness of Dufferin and Ava, it is expected to fetch up to $3 million at the Magnificent Jewels and Noble Jewels sale on May 11.

“Kashmir sapphires of over 30 carats are a very rare occurrence, so the appearance of a gem of 55.19 carats — the largest ever to come at auction — is an important event,” said Benoit Repellin, head of Sotheby’s Geneva Magnificent Jewels auction. “Hailing a distinguished provenance and set as a stunning brooch alongside another Kashmir sapphire, it will undoubtedly evoke much interest among collectors.”

A square emerald-cut, 40.08-carat, D-flawless, type IIa diamond ring with a high price tag of $4.5 million will also be up for sale, as will a pear-shaped, 43.24-carat, D-color, type IIa diamond with VVS1 clarity. The latter stone, designed by Harry Winston, comes from an important noble collection. It carries a high estimate of $3.5 million.

Another Harry Winston piece, created in 1973, from a noble collection, is set to go under the hammer in Geneva as well. The necklace, containing eight pear-shaped diamonds weighing between 3.77 and 20.72 carats, has a high estimate of $2.5 million.

Sotheby’s will also sell several noteworthy sapphires from an important noble collection. Those include a sapphire and diamond necklace with a detachable pendant featuring a cushion-shaped, 111.73-carat, Ceylon royal-blue sapphire, estimated at up to $2.5 million.