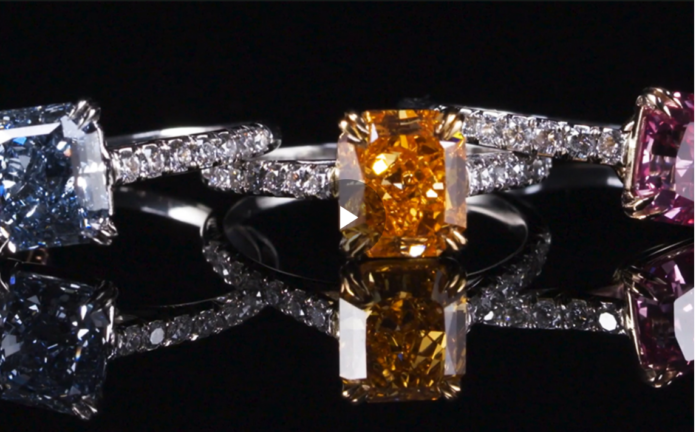 As a ‘perfect palette’ of diamond rings in Fancy Vivid spring colours comes to auction on 13 April in New York, our specialists explain why coloured gems have an allure all of their own

Coloured diamonds aren’t always a single colour. You may sometimes see a diamond described as ‘Vivid Orange Yellow’ — or even ‘Vivid Yellow Orange’. But what’s the difference? The key here is to look at the last word, which will be the principal colour. You can also have an ‘Orangey Yellow’. Here, yellow remains the dominant colour, with just a touch of orange; it’s not as orange as an ‘Orange Yellow’.

3. Are some colours more valuable than others?

The rarest of the rare is a red diamond — there aren’t many, and they’re generally not very big. It would be exceptionally unusual to find a red diamond above 2 carats.

4. How are coloured diamonds graded?

Christie’s sends diamonds to the GIA laboratory (the Gemological Institute of America), which provides the world’s most trusted colour grading service. It’s often worth doing, even if you have a stone with a weak colour — particularly if the colour is faint pink, green or blue, for example, which could still be significantly valuable.

5. Where do coloured diamonds come from?

Mining coloured diamonds is really a matter of chance. The only exception is the Argyle mine in Australia, owned by Rio Tinto, which is the only mine in the world to consistently produce pink diamonds, and is also the world’s largest supplier of natural coloured diamonds.

Diamonds in their purest form are white — as are all other gemstones, except three: opal, turquoise and peridot. What turns them a particular colour is the presence of an accidental colouring agent. A blue diamond, for example, will contain a tiny amount of boron in the composition of the stone. Green diamonds acquire their colour from radiation in the ground, while yellow diamonds are created when nitrogen enter their chemical composition. Pink diamonds result from a ‘slip’ in the stone’s lattice structure.

6. What about other coloured stones? Is there such a thing as a perfect emerald?

When it comes to emeralds, the most coveted are a darkish green. It’s important the stone isn’t too dark, however: the highest-quality emeralds combine good colour with clarity. Imagine if you were to take an empty wine bottle made from green glass and hold it up to sunlight — that’s a good indication of the perfect shade.

The proportions of an emerald (or any gemstone) are also important. If they’re poor, light will diffract and go through the stone, rather than bouncing around within it, coming out, and hitting the eye — a phenomenon known as total internal refraction. While fissures, known as ‘inclusions’, are common, too many will affect the beauty of the stone and lower its value.

Although highly rare, it is theoretically possible to get an emerald so perfect in terms of colour, clarity and brightness that it comes close to resembling the brilliance and ‘fire’ of a diamond (I have only ever seen a handful of emeralds that fall into this rare category).

7. What about rubies and sapphires?

The same concerns apply — as with emeralds, buyers of rubies and sapphires should look for stones with an appealing colour, good clarity, and attractive proportions.

A small percentage of the top rubies have a colour referred to as ‘pigeon’s blood’ — a dark red — though must not be too dark. Aim for a rich, warm burgundy that makes you joyful when you look at it.

For coloured gemstones, this is a point to be considered, with the top emeralds mined in Colombia, the finest rubies coming from Burma and, for sapphires, the cream of the crop hail from Kashmir. However, it is important to remember that attractive gemstones do come from many different localities, and it is all about the beauty of the colour and the budget available.

9. How important is carat?

It’s a common misconception to think that stones with a higher carat weight are always more valuable. They often are, but you could have a 50-carat emerald that’s worth say $500 per carat — or a five-carat emerald worth $30,000 per carat. The same is true for all stones. It’s a combination of the ‘four c’s’: colour, clarity, cut and carat weight.

10. Should I be wary of treated stones?

Man has a long history of tampering with coloured stones. Emeralds, for example, often have fissures that break the surface, which can be filled with oil or plastic resin. The oil or resin is designed to have the same refractive index as the stone and, once absorbed into the fissures, the inclusions become less apparent. This practice is one that goes back 4,000 years to Ancient Egypt, when natural oils were used.

The degree to which an emerald has been improved with an enhancement agent is graded from none to insignificant, minor, moderate or significant. Oil, though considered to be gentler, can have the disadvantage of leaking from the stone over time, unlike resin, which is permanent. There’s nothing wrong with buying an enhanced stone, as long as the degree of enhancement is reflected in the price — though a beautiful untreated emerald will be worth far more than a beautiful treated emerald.

11. What about coloured diamonds?

Buyers should ensure that the diamond’s colour is natural. Concerning green diamonds, it’s important to verify that the radiation that gave the stone its colour occurred in the ground, and not in a laboratory — one of the hardest tests for the GIA to determine. Blue diamonds can also be created through artificial irradiation, but mostly look obviously wrong.

Pink diamonds gain their highly desirable colour as a result of a rare, naturally occurring slippage of the crystal lattice in the stone while it is forming deep within the Earth’s crust. Similarly, the colour of yellow stones can be enhanced, with the most famous example of an enhanced stone being the Deepdene Diamond, weighing 104.52 carats.

12. How should I care for coloured stones?

One golden rule is: never carry gemstones in a pouch. Sadly, it’s something I’ve seen too often, and results in badly damaged stones. The resistance of minerals is assessed using ‘Mohs scale of hardness’. If stored with other stones, a diamond will scratch another diamond, and any stone softer than it. Sapphires will scratch everything that is softer than them, and so on, down the scale.

It’s a mistake, however, to think that diamonds are indestructible. Although they are the hardest substance known to man, they do have a certain brittleness. A diamond can chip, for example, if it hits a hard surface like marble. Here, weight becomes critical: if a diamond is damaged, it can be re-cut to remove any chips, but in doing this there will be a loss of weight. If a stone weighing 10.05 carats drops to 9.95 carats, the impact on value can be significant, because it has dipped below 10.00 carats. A loss of half a carat in a 15.75 carat stone, on the other hand, may do little to alter value.