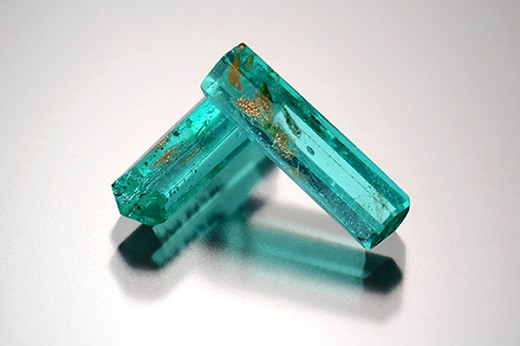 RAPAPORT… Two pieces of green glass imitating valuable tourmalines have turned up at the Gemological Institute of America (GIA) after manufacturers apparently used innovative techniques to make the shards look like real gemstones.

The bluish-green prisms weighing 1.91 and 1.92 carats resembled either Paraiba tourmaline with copper inclusions or emeralds with pyrite inclusions, the GIA said in a recent journal article.

The refractive index of 1.50 indicated the pieces were not tourmaline. Furthermore, microscopic examination at the GIA laboratory in Carlsbad, California — which had received them for its identification service — showed that each prism comprised two different types of man-made glass fused together. Further testing revealed the presence of copper, which the makers had added as platelets to imitate genuine inclusions.

Paraiba tourmaline is one of the priciest varieties of the gemstone, noted senior staff gemologists Amy Cooper and Heidi Breitzmann and staff gemologist Jamie Price in the Winter 2020 edition of Gems & Gemology, the GIA’s quarterly academic journal.

“The polish lines seen on the surfaces of both glasses clearly indicate that these were faceted to resemble a natural rough stone, and the trigonal outline and elongate shape suggest the goal was to imitate tourmaline, which has a similar appearance,” they explained. “The copper inclusions and neon bluish green color would further indicate that the manufacturer intended to imitate Paraiba-type tourmaline.”

Coincidentally, while the Carlsbad lab was examining the pieces, a natural Brazilian tourmaline also came in for the GIA’s identification and origin service. The stone had the same copper inclusions that the fakes had attempted to mimic, Cooper, Breitzmann and Price pointed out.

“It is unusual to see man-made glass cut to imitate a natural rough crystal with eye-visible inclusions,” they continued. “These pieces…were certainly interesting from a gemological perspective to demonstrate the variety of creative ways imitation gems are produced.”

Image: The green glass manufacturers had made to imitate tourmaline. (Diego Sanchez/GIA)