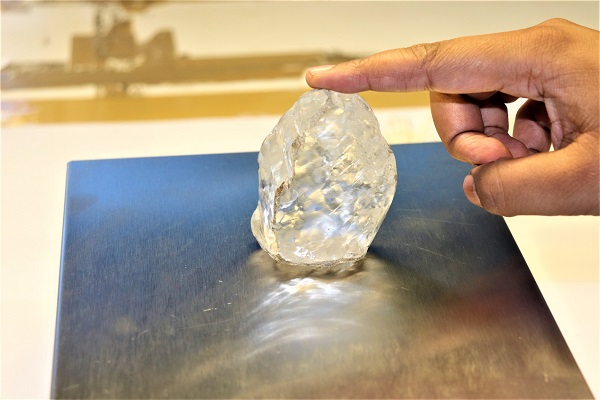 RAPAPORT… Debswana, De Beers’ joint venture with the Botswana government, has discovered a 1,098-carat rough diamond, one of the largest in history.

The company found the “high gem-quality” stone at its Jwaneng mine on June 1, it said on Wednesday. It will work with the government and De Beers to value and sell the diamond, aiming to maximize returns for the people of Botswana.

“This is the largest diamond to be recovered by Debswana in its history of over 50 years in operation,” said managing director Lynette Armstrong, according to reports by Reuters and other news sites.

“From our preliminary analysis it could be the world’s third-largest gem-quality stone. We are yet to make a decision on whether to sell it through the De Beers channel or through the state-owned Okavango Diamond Company,” she added.

The stone trails the 3,106-carat Cullinan diamond, recovered in South Africa in 1905, and the 1,109-carat Lesedi La Rona, which Lucara Diamond Corp. unearthed at its Karowe mine in Botswana in 2005. Karowe also produced a 1,758-carat rough in 2019, but the stone was of “near-gem” quality. Previously, the largest gem-quality Jwaneng diamond was a 446-carat specimen from 1993.

Debswana, which operates as a 50:50 partnership, hosted a viewing with Botswana President Mokgweetsi Masisi on Wednesday. The company will release marketing plans in due course. It did not disclose further details of the stone.

“The recovery of a rare, high gem-quality diamond of this size is testament to Debswana’s world-class skill and expertise, and reinforces [the] Jwaneng mine’s impressive standing as one of the world’s most valuable diamond mines,” De Beers said.

Jwaneng began production in 1982 and is the second-largest contributor to De Beers’ supply, yielding 7.5 million carats in 2020, behind Botswana’s Orapa group of mines, which produced 9 million carats. Both deposits have been an “engine” driving the investment of diamond revenues in infrastructure, education and health care, Debswana pointed out.