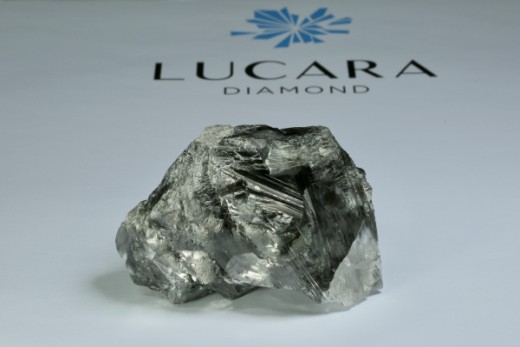 RAPAPORT… Lucara Diamond Corp. has recovered a 1,174.76-carat rough diamond from its Karowe mine in Botswana and believes it was originally part of a stone weighing more than 2,000 carats.

The clivage diamond — which needs to be split before processing — came from the site’s south lobe EM/PK(S) area, known for its large, high-quality rough, Lucara said Tuesday. The rough contains “significant” portions that are gem-quality and others of lower quality, the company stated.

On the same day, Lucara found similar rough stones weighing 471, 218 and 159 carats in the same portion of the deposit, indicating they were all part of a larger diamond, it explained.

The diamond is the third over 1,000 carats Lucara has unearthed from the south lobe, following the 1,758-carat Sewelô in 2019 and the 1,109-carat Lesedi La Rona in 2015. Its recovery of large stones has benefited from the use of a Mega Diamond Recovery circuit, which utilizes X-ray technology to identify huge diamonds before they are broken up.

The processing of these large stones will take place through Lucara’s partnership with HB Antwerp, a Belgian manufacturer that has agreed to buy all of the miner’s rough above 10.8 carats. The goods “will be transformed…into valuable collections of top-color polished diamonds, very much in high demand in the market today,” noted Lucara CEO Eira Thomas.

This is the second diamond over 1,000 carats Botswana has produced this month. Last week, Debswana, De Beers’ joint venture with the Botswana government, announced it had unearthed a 1,098-carat rough from its Jwaneng mine.