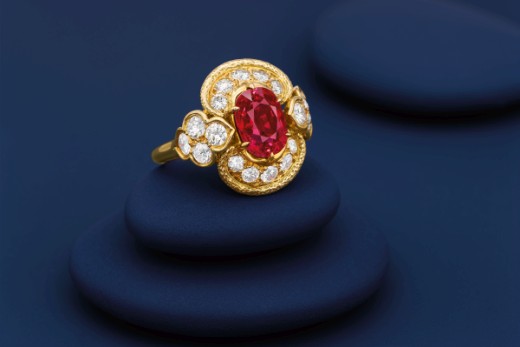 RAPAPORT… A ruby and diamond ring led the Bonhams Jewels and Jadeite sale in Hong Kong, which saw nine of the top 10 lots beat their high estimates.

The Van Cleef & Arpels piece, which contained a 3.21-carat, pigeon’s blood Burmese ruby surrounded by diamonds, sold for HKD 3.8 million ($483,480) at the June 20 auction. That total was well above its high valuation, Bonhams said last week.

Other notable items included a ring with a 9.51-carat alexandrite center stone bracketed by two diamonds. That sold for HKD 2.5 million ($322,421), more than eight times its presale estimate.

“The well-attended sale…achieved some of the strongest biddings in recent months,” said Leslie Roskind, head of jewelry for Bonhams Hong Kong. “Red stones…were particularly sought after.”

However, several top items remained unsold at the auction. A ring by designer Sally Ryder featuring a cut-cornered rectangular-cut, 5.02-carat, fancy-orangey-pink diamond — estimated at up to HKD 8.2 million ($1.1 million) — was withdrawn before the sale. A pair of Burmese sapphire and diamond earrings with a high valuation of HKD 5.3 million ($680,000) failed to find a buyer, as did a pair of emerald and diamond earrings that had been predicted to fetch up to HKD 4 million ($515,360).