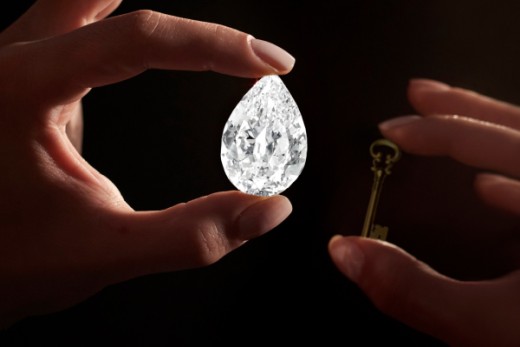 RAPAPORT… Sotheby’s sold a 101.38-carat diamond to an anonymous buyer for $12.3 million, garnering the highest price for any jewel or gemstone purchased with cryptocurrency.

The auction house offered the pear-shaped, D-flawless diamond, called The Key 10138, at a single-lot auction on June 9 in Hong Kong, it said last week. The polished stone originated from manufacturer Diacore, and is the second-largest pear-shaped diamond ever to appear for public sale, Sotheby’s noted.

This was the first time Sotheby’s had offered jewelry for purchase in cryptocurrency, with the auction house accepting either bitcoin or ether for the sale. The company did not disclose which form of payment was used.

Sotheby’s had estimated the diamond would fetch between $10 million and $15 million, approximately 303 to 455 bitcoins. The final price was equalivalent to approximately 366 bitcoins or 5,818 ether.

The company saw active participation from international collectors, including new clients outside of its normal pool of buyers, explained Wenhao Yu, deputy chairman of the auction house’s jewelry department in Asia.

“We are thrilled to witness a historical moment, when one of the Earth’s oldest and rarest treasures was purchased using humanity’s newest universal currency,” said Yu. “By introducing this innovative payment option to our luxury sale, we open up new possibilities and expand our reach into a whole new clientele, many of whom are from the digitally savvy generation.”