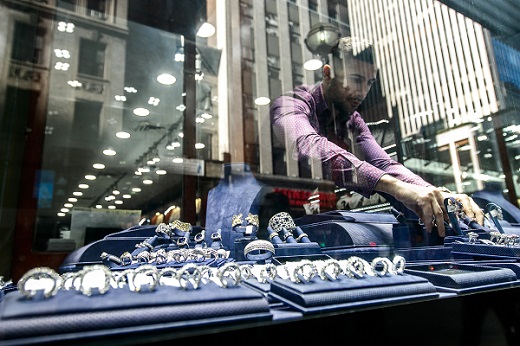 RAPAPORT… What a difference a year makes. Optimism was abundant in the market this past month, carrying through to predictions of a strong holiday season. Even with an eye on shrinking margins, positivity reigned.

“The one thing we have to look out for is price increases — if and when they come,” said Yosef Poplack, vice president of sales at New York-based wholesaler Gem Wave.

Gem Wave’s niche in melee, layouts and matched pairs of fancies has temporarily shielded the company from the tight margins that many in the industry are facing, Poplack said. While he has not encountered any problems securing inventory, he believes the reduced workforce at Indian factories due to Covid-19 is a concern for the industry.

As to whether politics was affecting his business, he declared that it was “not even an issue” and that the important thing was “getting the domestic and global economy going.”

“Retail stores are buying jewelry,” Poplack reported, adding that even last summer, he’d been able to “sneak into the office” and ship out goods to new clients, who continue to buy from him.

Several months ago, Gem Wave expanded its offerings to include Gemological Institute of America (GIA)-graded stones of half a carat and up in rounds and all fancy shapes. All its inventory is “100% natural mined diamonds,” a selling point the company displays on its website and documents.

Poplack’s association with several trade groups has helped further his company’s reputation and extend its client base, he said. And his consistent advertising has generated calls from potential clients. “If things keep going the way they are now, I can only see business increasing through the holiday season as demand gets higher. Things are coming back to life.”

Eitan Borochov had been worried that the pandemic would last even longer than it did. But now, the owner of wholesaler ABC Diamonds in Chicago, Illinois, is “surprisingly optimistic,” encouraged by stronger sales and an almost palpable sense that the economy is improving.

Still, inventory ranks as one of his top concerns. Borochov’s reluctance to pay the “new, higher prices” has made it “a little harder” to get the goods he needs, he remarked. He much prefers “stable prices that make it easier to plan.”

The crisis in India will have both short- and long-term effects, he said: Prices will continue to rise, but once the crisis is over, “there will be an abundance of goods in the market, and prices will start leveling off again.”

Noting a link between politics and the economy, he said the US administration’s plan to raise corporate taxes could cause a slowdown in a market currently poised for growth. He also voiced concern about transparency in the lab-grown sector.

Yet he predicted a potentially bright future. “If the summer continues as it is trending, the holidays will be amazing — for the first time in years.”

For Tony Ayvazian, “the issue is finding the right goods at the right price. It’s all about margins.”

The president of wholesaler Ayvazian Company in Los Angeles, California, commented that “finding goods at a reasonable price from the manufacturer is not a winning proposition anymore for those of us located on the West Coast.” He cited “severe” competition coming from New York wholesalers and online retailers, and observed that secondhand goods were playing “an important role again.”

While there is activity in the general market, he said, it’s dealer-to-dealer, which further squeezes margins. “We’re not getting calls from retailers. With all respect to dealers — I’m one myself — we can’t sustain the business in this manner.”

Ayvazian was less concerned with the political situation — “We’re past politics at this point” — than with inflation and its impact on diamond prices. “Newly polished goods will not be cheap, since the manufacturers paid strong rough prices.” Inflation is also affecting the cost of living, which may put a damper on sales.

Because of shrinking margins, Ayvazian no longer focuses on selling three-quarter or 1-caraters. His preference is to buy “nicely cut fancy shapes, including emerald, pear and even marquises.”

While he expressed optimism about the holiday season, he also acknowledged the “dilemma of sometimes selling below cost just to create liquidity.”

“For decades, our business was on cruise control — it was buy-sell-buy,” he explained. “But now you’re the driver, and you have to adapt — even if that means selling online 24/7 — or you’ll hit a wall.”