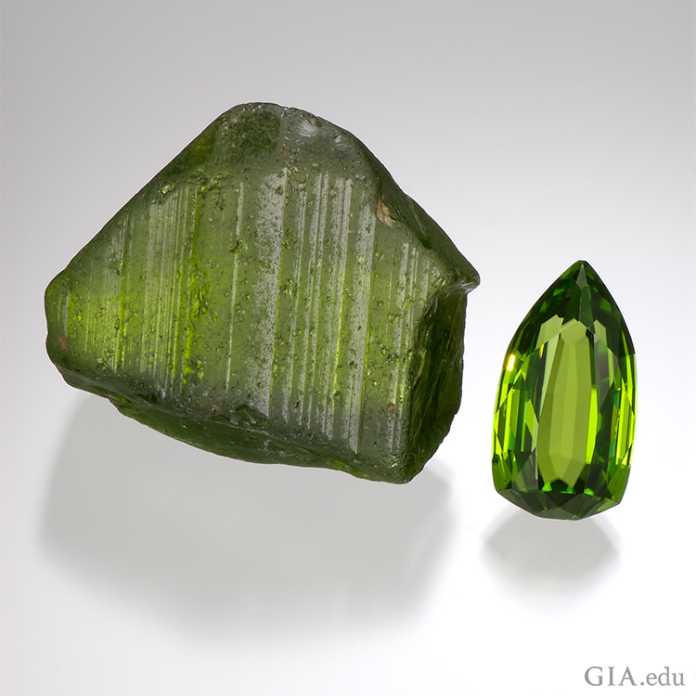 Peridot is the yellowish green to greenish yellow gem variety of the mineral olivine. Throughout history, peridot has often been confused with other gems such as topaz and emerald. The Red Sea island of Topazios, a purported source of the name “topaz,” actually produced peridot. The Shrine of the Three Holy Kings in Germany’s Cologne Cathedral is decorated with 200 carats of gems that were believed to be emeralds but are, in fact, the August birthstone peridot. Some historians even speculate that Cleopatra’s famous emerald collection may have been comprised of peridot.

The word “peridot” comes from the Arabic faridat, meaning gem. This August birthstone was valued in many ancient and medieval cultures. It appeared in priests’ jewelry as early as the second century BCE and later in the chalices and churches of medieval Europe. The peridot birthstone has also been used for centuries as a protective talisman, shielding the owner from evil spirits and “terrors of the night.”

Peridot is the gem given to celebrate a 16th wedding anniversary.

WHERE IS PERIDOT FOUND?

Peridot, the August birthstone, has an amazing story. Although most of the peridot seen in jewelry today comes from sources such as China, Myanmar, Pakistan, Tanzania, Vietnam and the United States, some journied to Earth on meteorites while others are found in exotic locales like Peridot Beach, Hawaii, where the sands shimmer a luminous green.

The Egyptian island of Zabargad (the name now given to Topazios) is the oldest recorded source of this August birthstone. Mining may have begun around 340–279 BCE. Although the island produced beautiful peridot, its harsh conditions earned it ominous names like Island of Death and Ophiodes (“snake island”). Peridot from Zabargad has been prized for centuries and is still highly desirable. The finest specimens of this birthstone for August can be found in prestigious museums around the world.

Myanmar (formerly Burma) is another important source of the peridot birthstone. On the northern slope of Kyaukpon, a mountainous region near the gem city of Mogok, loose peridot crystals can sometimes be found in crevices. The finest-quality peridot from this locality has deep color and superb transparency.

Arizona is the main source of this August birthstone in the United States. Massive volcanic eruptions many thousands of years ago sent rivers of lava spilling across the desert landscape of what is today the San Carlos Apache Indian Reservation, where some Apache families have worked the mines for decades.

This August birthstone has also come to Earth via pallasite (made of nickel-iron and olivine) meteorites. Thousands of meteorites have hit the earth, many of them containing olivine, but only a few have had gem-quality peridot.

With a hardness of 6.5 to 7 on the Mohs scale of harness, peridot is softer than many gems and cannot take hard wear, so it is not recommended for daily use in a ring. This August birthstone can also be damaged by some acids and even by long-term exposure to acidic perspiration. Cleaning peridot is a delicate process. Never use a steam or ultrasonic cleaner, as your peridot birthstone is vulnerable to thermal shock. It is safest to use a s0ft-bristle brush with a mild dish soap in warm water. Peridot should be stored with care to avoid scratching by gems with greater hardness.