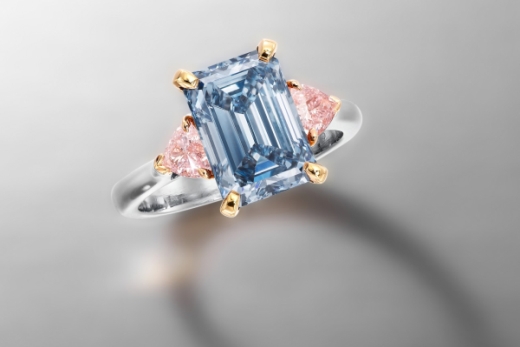 A rare brilliant-cut, 30.88-carat, D-flawless unmounted diamond brought in $3.8 million, in the middle of its presale valuation. Meanwhile, a ring containing a pear-shaped, 5.29-carat, fancy-intense-green, SI1-clarity diamond surrounded by diamonds with a pink tint went for $3.1 million, within estimates.

Several jade pieces were among the most valuable jewels the company sold at the auction, it noted. A carved jadeite pendant, called Fortunate Longevity, achieved $2.8 million, while a jadeite bead, diamond and ruby necklace garnered $2.6 million. A jadeite bangle sold for $2 million.

“International interest in fine jadeite continues to grow, with bidding from Asia, US and Europe,” Sotheby’s explained.

However, two top lots remained unsold. The Queen Joséphine Necklace, a pearl and diamond piece from the royal house of Sweden, was estimated to fetch up to $3 million. That jewel was withdrawn from the sale at the consignor’s request, the auction house said. An heirloom diamond brooch by Harry Winston featuring five marquise-cut, flawless diamonds and one pear-shaped diamond arranged in a floral pattern was also left unpurchased. Known as the Star of Sierra Leone, the brooch failed to meet the reserve price. It carried a high estimate of $1.4 million.