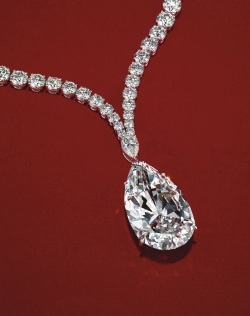 RAPAPORT… Christie’s will offer a 74-carat diamond necklace that could fetch up to $7 million at its upcoming Hong Kong auction.

Two colored-diamond pieces are also set to star in the sale. A pair of earrings featuring fancy-vivid-blue diamonds weighing 3.06 and 2.61 carats along with white diamonds is set to go under the hammer with a price tag of up to $8 million. Meanwhile, a 3.32-carat, fancy-vivid-blue, internally flawless diamond ring could fetch as much as $6.4 million, Christie’s noted.

Other notable pieces include a jadeite cabochon ring with a high valuation of $1 million, a pair of jadeite cabochon earrings estimated at $480,000 to $750,000, and a jadeite, ruby and diamond necklace and bracelet set by Cartier.

A selection of cufflinks containing diamonds, emeralds, rubies and sapphires, assembled over decades by a prominent private collector, will also be on offer, the auction house added.