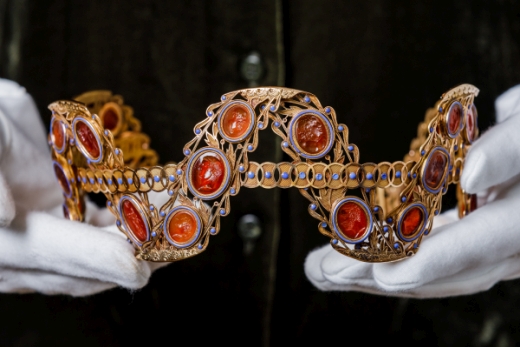 RAPAPORT… Two headpieces believed to have belonged to Empress Joséphine Bonaparte of France are set to go on sale at Sotheby’s after spending the last 150 years in a private collection.

The tiaras, made in Paris in 1808, are expected to fetch up to GBP 500,000 ($684,629) combined at the December 7 London Treasures sale, the auction house said last week. Each headpiece is part of a parure — a set of matching jewels designed to be worn together. They are still contained in their original Parisian leather boxes.

The first is a gold diadem decorated with blue enamel and carnelian — a semiprecious gemstone — and set with 25 engraved pieces featuring male and female classical heads. It will be offered together with a pair of pendant earrings, each set with a single intaglio — a type of engraved image — and similarly decorated. The set also comprises a hair comb and a belt ornament, the center of which has an etched cameo of Bacchus, the Roman god of agriculture, wine and fertility. The parure is estimated at GBP 200,000 to GBP 300,000 ($273,852 to $410,777).

The other is a gold and enamel tiara by Jacques-Amboise Oliveras containing five oval hardstone cameos depicting Zeus, Dionysus, Medusa, Pan and Gaia. It comes with a belt clasp of similar design set with an agate cameo of Medusa, and a belt ornament featuring a hardstone cameo of Zeus. That collection is valued at up to GBP 200,000.

“These majestic jewels mounted with cameos and intaglios certainly evoke the style of the grand Empress Joséphine — her rank as wife of Napoléon Bonaparte, her impeccable taste and her interest in the classical world,” said Kristian Spofforth, head of Sotheby’s Jewels department in London. “By being the first to incorporate these cameos and intaglios into her dress, wearing them side by side with pearls and diamonds, she created an entire new fashion that swept Paris and the world, based on neoclassical forms.”

Sotheby’s will also sell several jewelry pieces thought to have belonged to the empress, including six hardstone cameos and one large intaglio with four small carnelian intaglios, fitted into a necklace. The auction house will sell each element individually. In addition, a collar set with nine cameos and 10 small intaglios with animals is estimated at up to GBP 50,000 ($68,463).

Image: The tiara with the cameo of Bacchus. (Sothebys)