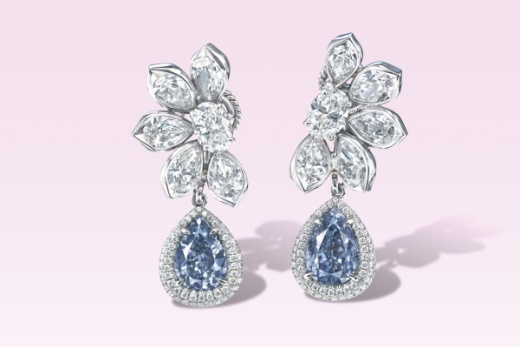 RAPAPORT… A pair of blue diamond earrings was the star performer at the most recent Christie’s jewelry auction in Hong Kong, bringing in more than $7 million.

Other notable items included a pair of earrings sporting oval-cut, Burmese pigeon’s blood rubies weighing 5.19 and 5.03 carats, surrounded by diamonds. Together they garnered $3.2 million, as did a set bearing cushion-shaped Kashmir sapphires weighing 8.93 and 8.76 carats. The latter also contained emerald-cut and round brilliant-cut diamonds. Both pairs were just over their low estimates.

Meanwhile, a carved jadeite and ruby pendant necklace sold for $3.1 million, just shy of its bottom valuation, while a Kashmir sapphire and diamond bracelet fetched $2.7 million, within its estimate.

Christie’s sold 87% of items on offer, with “heated participation” from buyers in 14 countries. In total, jewelry sales in Asia Pacific have brought in $148 million this year, the company noted. The auction house’s next sale will be the New York Magnificent Jewels auction on December 8.