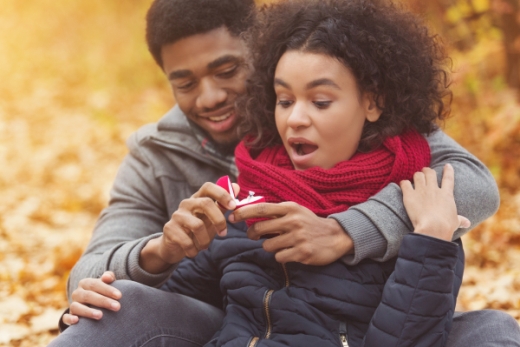 RAPAPORT… Spending on engagement rings has bounced back to pre-pandemic levels, largely thanks to millennial buyers paying more, according to a survey by The Knot.

Couples cared most about the shape and setting of their rings, while size became less important, The Knot noted. On average, consumers purchased 1.5 carats in total, with one in four bands bearing stones greater than 2 carats in total.

The most popular type of stone was a diamond, chosen by 86% of respondents. Although round remained the most popular cut, picked by 41% of those surveyed, ovals have seen increased popularity. The latter shape was the top choice for 19% of couples, compared to 2% in 2015. As for the type of metal, desire for yellow gold engagement rings bounced back, up 11% since 2017. Conversely, only 45% opted for white gold, versus 61% four years ago.

Of the 10% of respondents who preferred precious gems for their center stone, moissanite ranked the highest, listed by 28%, compared to 9% in 2019. Nearly 25% of engagement rings this year featured a synthetic center stone, up 11% from 2019.

“We’re thrilled to see that proposals are returning to pre-pandemic behaviors,” said Shelley Brown, senior fashion and beauty editor of The Knot. “The majority of couples are already booking their weddings for 2022, as the wedding boom is upon us. With this renewed excitement surrounding proposals comes an increased interest in highly personalized engagement rings. Oval diamonds, yellow gold settings and alternative center stones like moissanite and sapphire are all gaining popularity, speaking to couples’ increasing desire to invest in wedding traditions that represent their specific love story and personal taste.”

Although couples continue to use social media and online jewelry sites for research and inspiration, most still prefer to shop in stores. Some 67% of engagement rings were purchased at brick-and-mortar locations, with half of those bought at local jewelers. Meanwhile, 75% of couples who got engaged this year have already set a date for a 2022 wedding, with fall being the most popular season, The Knot added.

The Knot surveyed more than 5,000 respondents who got engaged between January and November.

Image: A couple getting engaged. (Shutterstock)